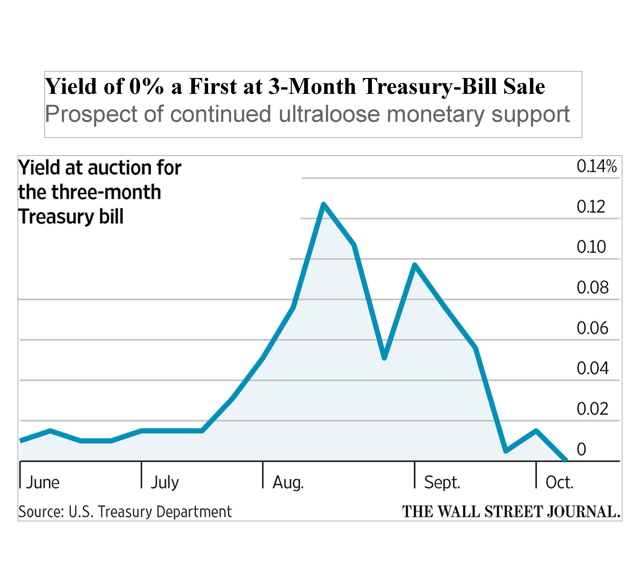 “Officially joining the 0% bond club, the U.S. Treasury sold a new government security on Monday containing a three-month maturity and a yield of zero for the first time on record. In essence, buyers gave a free short-term loan to the government in exchange for a highly liquid debt instrument for their portfolio. The result adds to the diminishing expectations – stoked by Friday’s disappointing jobs report – that the Fed will keep interest rates at basement levels throughout 2015.”

Record times. Should we break out the bubbly and celebrate, or get out the Valium? Now, after a lifetime of 40-hour weeks, you too can lend your hard-earned money to Uncle Sam and get a negative 2% return for your trouble. (Let’s not forget about that big elephant in the room called inflation.) Figure it into your return calculations and you lose 2% annualized on this “investment”.

The U.S. Treasury has finally joined a rarefied club, along with Germany, Japan and others.

If you are the patriotic type and feel like giving Uncle Sam an interest free loan, be my guest. Do you also pay more tax than required because you think Uncle Sam could use a break dealing with those big deficits? Do you have so much money with no place to go that you’d rather see it locked up, safe and sound for 3 months in Uncle Sam’s vaults than chance it being stolen from underneath your mattress?

Be my guest. I have better ideas for those dollars.

Here’s how the Wall Street Journal reported this astounding event.

The U.S. Treasury sold a new government security with a three-month maturity and a yield of zero for the first time on record, reflecting the highest demand since June.

In essence, buyers gave a free short-term loan to the U.S. government in exchange for a highly liquid debt instrument for their portfolio.

The result reflects diminishing expectations in financial markets that the Federal Reserve would raise short-term rates before year-end after Friday’s disappointing jobs report. Yields on these short-term Treasury-debt instruments are highly sensitive to changes in the Fed’s interest-rate policy outlook.

The prospect of continued ultra loose monetary support bolstered demand on Monday for riskier assets, including stocks and commodities. That in turn diluted the appeal of relatively safer assets, boosting the yield on the benchmark 10-year Treasury note to 2.058% Monday, from a five-month low of 1.989% Friday. Bond yields rise as prices fall.

The Fed is off the table for 2015 no matter what they say,” said Andrew Brenner, head of international fixed income for broker dealer National Alliance Capital Markets. Investors “will claw their way back” in riskier assets between now and year-end, he said.

Monday’s $21 billion auction of three-month Treasury bills drew $4.14 in bids for each dollar offered, and the resulting bid-to-cover ratio was the highest since June 22. Bills are Treasury debt maturing in a year or less. The Treasury sells bills maturing in one month, three months and six months on a weekly basis.

Competition to obtain bills has been intensifying lately. Of the past six one-month bill auctions, five sales were offered at a zero yield.

In the secondary market, some bills have been yielding slightly below zero or around zero for weeks. On Monday, the yield on the one-month bill traded at negative-0.02% and the three-month yield was zero. An investor who holds the one-month bill through maturity will log a moderate capital loss, but that is the price the buyer has been willing to pay to obtain the bills.

It is a bizarre outcome, but that is the world we are living in right now,” said Thomas Simons, money-market economist in the Fixed Income Group at Jefferies LLC. “For many investors investing in short-term markets, bills are the only game in town.”

Last week, I wrote an article about a bank offering a “high yield” of 1.05% to depositors. I disparaged the misnomer, calling such a product high yield, when clearly, even in ZIRP world, alternatives exist.

Little did I imagine that we’d now be referring to last week’s 3-month Treasury yield of .08% as high yield in comparison to today’s offering of 0%. What have we come to, where anything higher than 0% is now considered high yield?

If there was any doubt in anyone’s mind that we’re stuck at low rates for longer, I think this latest pricing has cleared things up. Which brings us to yet another crossroads:

A. Recognize that this is yet another gift and a tip of the hat to equity markets because cheap money is here to stay, a while longer at least, allowing the equities markets greater running room to extend the six-day rally and re-inflate investors’ wallets. Champagne? Yes, please.

B. Remain downtrodden because we have no place to store our hard-earned money safely and earn any return whatsoever. A little Valium to calm the nerves? Retirees used to being able to comfortably park their money in safe investments like Treasuries and CDs continue to feel the brunt of this zero interest rate policy and perceive that after being thrown under the bus for almost nine years of low rates, now at 0% it feels like that bus keeps crushing them over and over.

I choose alternative A. To accept this proposition from the Treasury is a most certain guarantee that when we are repaid in three months time, we will have lost 2% purchasing power on an annual basis. That strikes me as pure madness.

I gotta fever and the only prescription is MORE COWBELL!