Millennials, the largest and most significant generation for the US labor market, came of age in the era of broken central bank policies, leading to the greatest wealth, income and inequality gap in recent history. While baby boomers promised millennials the world through (expensive) college degrees, this generation discovered that massive student loans coupled with a deteriorating work environment had turned them into permanent debt and rent slaves. 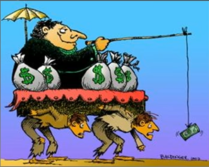 And now, according to a new Axios/Survey Monkey poll, millennials are getting angry, and starting to point fingers and cast blame, with a majority accusing baby boomers of not just making things difficult for them, but, of “ruining their lives.”

The survey found 51% of millennials (18 to 34-year-olds) blame baby boomers (51 to 69-year-olds) for making a raft of poor decisions since the 1980s, that have contributed to a weak political and economic environment; only 13% said the boomers made things better. Gen Xers was not satisfied with the pesky boomers, either; as 42% of them have blamed their life’s troubles on the boomers. Most amusingly, upon self-reflection, 30% of boomers agreed that their generation’s policies had made things worse, while only 32% said they had made it better, and 34% answered it made no difference.

When asked on how to improve today’s economic and political environment, millennials had several modest proposals:

While the economy has entered its late-cycle phase, the dangerous rift is growing between the millennials and boomers, each wrestling for a smaller pool of jobs and shrinking government handouts. The inter-generational conflict will only escalate due to the historic accumulation of debt, and unprecedented shifts in demographics and automation, which will only accelerate into the 2020s.

But the punchline is that if Millennials loathe Boomers now when the economy is still doing relatively well thanks to a decade of central planning and trillions in liquidity, one can only imagine how delighted they will be when the next recession, or rather depression, hits.