While mayor Lori Lightfoot continues to try and assure the public that she has everything under control, the exodus from Chicago as a result of the looting and riots are continuing. Citizens of Chicago are literally starting to pour out of the city, citing safety and the Mayor’s ineptitude as their key reasons for leaving.

Hilariously, in liberal politicians’ attempt to show the world they don’t need Federal assistance and that they don’t need to rely on President Trump’s help, they are inadvertently likely creating more Trump voters, as residents who seek law and order may find no other choice than to vote Republican come November.

One 30 year old nurse that lives in River North told the Chicago Tribune: “Not to make it all about us; the whole world is suffering. This is a minute factor in all of that, and we totally realize that. We are very lucky to have what we do have. But I do think that I’ve never had to think about my own safety in this way before.”

The city’s soaring crime has been national news this year and many residents are claiming they “no longer feel safe” in the city’s epicenter, according to the Tribune report. Aldermen say their constituents are leaving the city and real estate agents say they are seeing the same.

The “chaotic bouts of destruction in recent months” are the catalyst, the report says.

Residents of the Near North Side told a Tribune columnist that they would be moving “as soon as we can get out” and others “expressed fear” of returning downtown. The Near North Side is 70% white and 80% of residents have a college degree. The median household income is $99,732, which is about twice the city’s average.

Real estate broker Rafael Murillo says people are moving to the suburbs quicker than planned: “And then you have the pandemic, so people are spending more and more time in their homes. And in the high-rise, it starts to feel more like a cubicle after awhile.”

Additionally, those who once planned on buying downtown are reconsidering, he said. He said over the last week he has talked to “three or four” sellers who live downtown and want out so they can move to the suburbs.

He commented: “They want to feel safe. They want to be able to come outside their homes and enjoy their neighborhood amenities, whether it’s running at the park, enjoying a nice little dinner, shopping. But with everything going on, there are a lot of residents who are not feeling safe right now.”

Resident Neil Spun, who has lived in Chicago for more than 30 years, said: “There have been riots before, and looting. It just seems to me now that the city isn’t doing anything about it. I don’t see this getting any better, and so I’d like to leave.”

Philip Nyden, founding director of the Center for Urban Research and Learning and professor emeritus of sociology at Loyola University Chicago said: “One of the things around the immediate reaction to the looting: there is an undertone of race, I think. People don’t openly say ’those people’ from the South and West sides are coming downtown … (but) in Chicago, the looters shown on television were predominantly young and African American.”

He continued: “Streeterville is one of the richest neighborhoods in the city — probably in the metro area. The looting of luxury stores on Oak Street earlier this month sort of freaked some people out. It’s not an image you normally see. And I think they’re reacting to that.”

He said of the riots: “Folks start saying, ‘Well, we’re gonna go to the affluent neighborhoods and loot, and not wreck our own neighborhoods,’ (although) I don’t know if it was quite that conscious politically.”

Nyden says he is not yet comparing the exodus to the “white flight” of the 1950s: “A lot of white flight was related to pure racism in many cases, or false fears being fed by realtors, who were doing all sorts of things to rev up fears. I’m not seeing that here.”

Steven P. Levy, president of residential management firm Sudler Property Management wrote a letter to the mayor begging for change. It stated: “From Hyde Park to the Gold Coast to Edgewater, residents across the city are adjusting their daily routines out of fear. They’re avoiding neighborhood walks after 6 p.m. This is not a way to live, and I can’t fault homeowners when they tell me they’re considering leaving Chicago.”

Charlie Ragusa, a real estate client of Murillo’s, said: “I don’t feel comfortable here in the city anymore. People have the right to get their message out there … whatever it might be. But beyond the protests, we have the violence that’s attached to the protests. Often times, we combine the two of them together, because they pretty much happen at the same time. The violence is overpowering the people who have a message to say.” 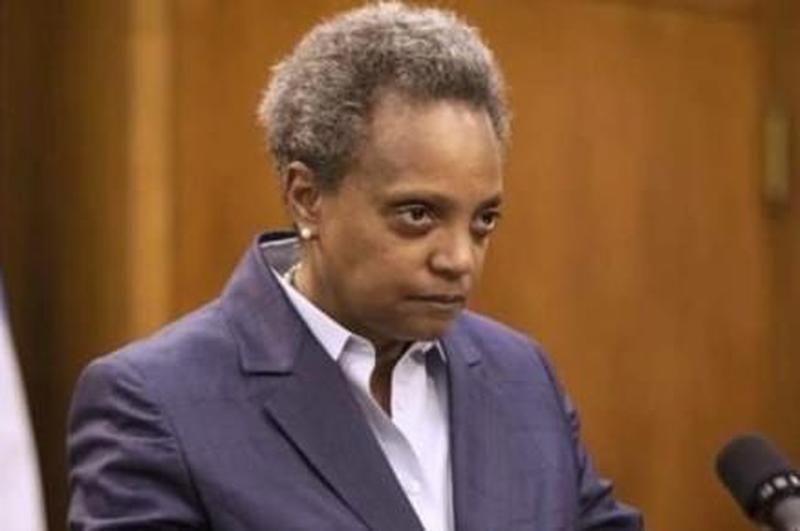 He blames the Mayor: “She hasn’t done her job. Her job is to protect me and protect the city. And I just don’t see that she’s doing it. I can’t go out at nighttime anymore. I’m afraid to. That’s not normal; that’s not the way Americans are supposed to live.”

Another resident says she is looking to take her family and move about 50 miles outside of the city. “We’re just looking for more safety,” she said. Both her and her husband support the Black Lives Matter movement, she said, but living downtown it doesn’t matter.

Looting had broken our near her home on August 10 and came home from a late night dog walk to see people surrounding her parked car. “The cops were just going past, and people had shopping carts full of (stuff), and all you heard were sirens, glass shattering and shouting. And gunshots. It was just very jarring.”

She concluded, in peak liberal hypocrisy fashion: “I think people forget that people do live here, too — it’s not just the Guccis and the Jimmy Choo stores. And I completely support it all. You stealing shoes means nothing to me — that doesn’t hurt me at all. It’s just the fact that that brings more crime, and that does endanger me.”