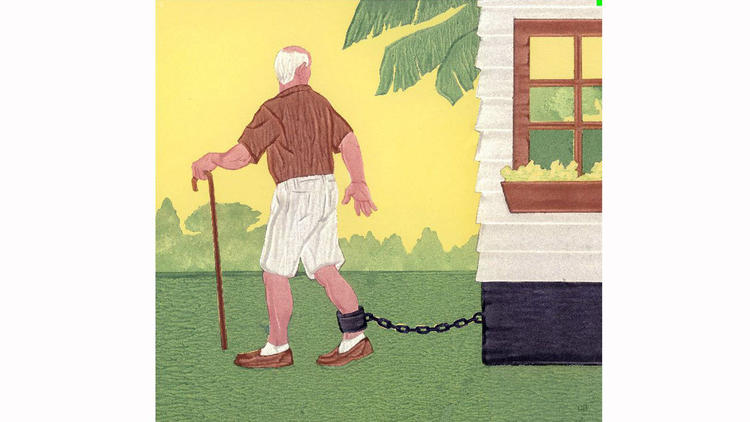 When Tom Greco bought his four-bedroom home three decades ago, he assumed he’d pay off the mortgage before retirement — just as his parents did.

Things didn’t work out that way.

Instead, his $4,500 monthly mortgage payments — a consequence of several equity withdraws over the years — became a financial drag.

“It’s pretty hard to retire with that,” the Irvine attorney, 66, said.

More and more older homeowners are carrying mortgage debt, a burden that threatens to delay their retirement and curtail spending among the massive baby boomer population.

Nearly a third of homeowners 65 and older had a mortgage in 2011, up from 22% in 2001, according to an analysis from the Consumer Financial Protection Bureau, using the latest available data. 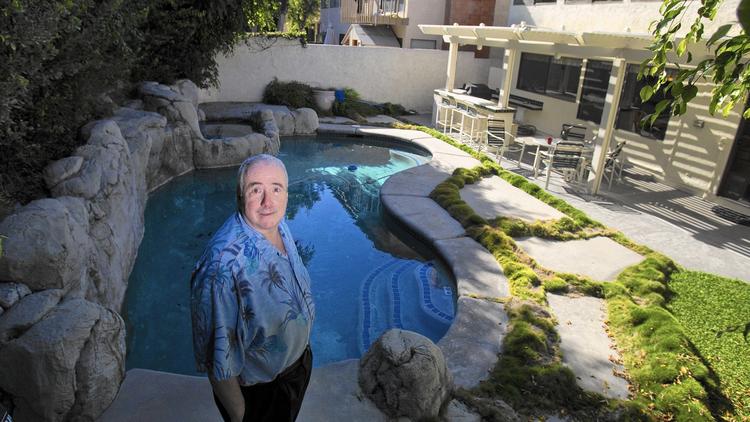 Tom Greco and his wife are downsizing from an Irvine house to a Lake Forest condo. To retire, Greco needs to reduce his mortgage payment. (Allen J. Schaben / Los Angeles Times)

For decades, Americans strove hard to pay off their mortgages before retirement, an aspiration that when achieved was celebrated with mortgage-burning parties.

But for the latest retirees, reaching that goal, if they ever had it, is increasingly less likely.

Baby boomers bought homes later in life, and with smaller down payments, than previous generations, said Stacy Canan, deputy assistant director of the consumer bureau’s Office for Older Americans. Many also refinanced during the housing bubble and used cash from their equity withdraws to pay off other debt, take vacations or put children through college. Surging home prices and low interest rates made that possible.

Then the recession hit. Job losses delayed attempts to pay off mortgages. And many baby boomers took in their adult children after the collapse, refinancing to help their kids weather a brutal job market, said James Wells, a housing counselor with ClearPoint Credit Counseling Solutions.

“Before, the children could take care of themselves,” he said. “Now, not so much.”

The number of mortgage-holding households headed by someone 65 or older rose from 3.8 million in 2001 to 6.1 million a decade later, the consumer bureau said.

“People who lived through the Great Depression came out of that period with a great aversion to debt,” said Lori Trawinski, director of banking and finance with AARP’s Public Policy Institute. “As a culture we have loosened our opinion of debt.”

As baby boomers enter retirement age — 10,000 per day, according to one estimate — the decisions that once supported an easier lifestyle could make later years tougher. Some may have to keep working to pay their mortgage, and others will have to cut back on other expenses to retire, the bureau’s Canan said.

“People will indeed have to do some juggling of their budgets,” she said.

Jacqueline Murphy is doing just that. The former clerical worker for the New York City Police Department retired in March, thinking her pension and Social Security, coupled with a part-time job, would allow her to live comfortably and cover mortgage payments on the Bronx town home she bought for $375,000 during the housing bubble.

But the 63-year-old hasn’t yet found a part-time gig, and a large chunk of her income is going to the $2,200-a-month mortgage.

So she’s cutting back. She keeps the lights off as much as possible, has cut back on gardening to reduce the water bill, and sometimes gets help from family to buy groceries.

Wells, the housing counselor, said those he counsels often didn’t budget for reduced retirement income when they refinanced to help their children, fix a car or take a vacation. They were working then, so the payments seemed reasonable.

“They are not really thinking long term at that point,” he said.

He then used the money from the cash-out refinancings to pay down credit card debt and finance home renovations, including a pool he himself designed.

“A foolish move,” he said of the refinancing, but one that many others, including friends, did as well.

A recent study from Harvard University’s Joint Center for Housing Studies showed that of mortgage holders ages 65 to 79, nearly half spent 30% or more of their income on housing costs. Of mortgage holders 80 or older, 61% pay that amount on housing.

And the debt carries further risks.

Sudden changes in expenses, such as those stemming from health problems, can expose seniors with mortgages to greater financial peril, the consumer bureau’s study said. And if another downturn comes, retirement savings and investments are likely to take a hit, raising the chance of foreclosure.

One option is to downsize.

That’s the choice Greco made. In August, he and his wife sold their Irvine house. Next month they plan to move into a Lake Forest condo, knocking down their mortgage payment by thousands of dollars. Even after downsizing, Greco said, he simply can’t retire as he wishes. There’s the condo mortgage and other debt he must pay.

So instead, he plans to gradually work less and less. He started this month, a day after his 66th birthday, by working half-days on Fridays.

In five years, he hopes to have paid down the condo loan enough to get a reverse mortgage that will allow him to only take on cases that interest him.

Reverse mortgages allow people at least 62 years old to receive payments based on the equity in their homes. But unlike a traditional home equity loan, a reverse mortgage does not require monthly payments. The loan, which is easier to qualify for than a home equity line of credit, doesn’t come due until the home is sold or the borrower moves out or dies.

Having to still work is not the ideal situation, Greco said, but retirement will be far easier without the Irvine house as an anchor.

“I needed to get out of that mortgage,” he said.