There was some hope for a rebound in US housing indicators, after the recent existing home sales print rebounded, but that was promptly dashed after pending home sales dropped again in November, sliding -0.7% vs the expected 1.0% increase, declining in six of the last eight months, with a cumulative loss since March of -5.9% (-8.9% annualized)… 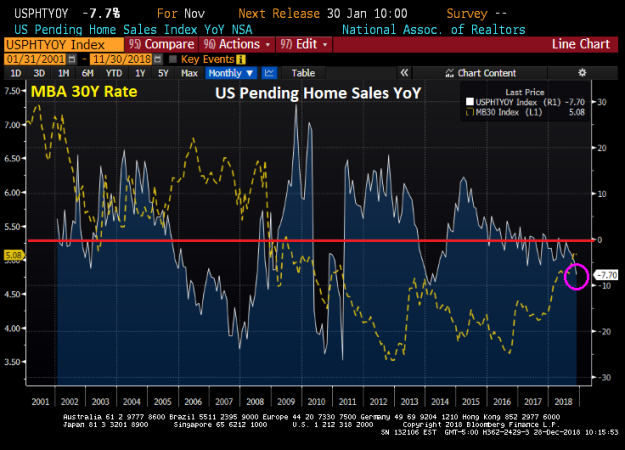 …and crashed a whopping 7.7% compared to last year, the biggest annual drop since April 2014.

This is the worst pending home sales print since June 2014.

Always eager to put lipstick on a pig, commenting on the collapse NAR chief economist Larry Yun said “the latest decline in contract signings implies more short-term pullback in the housing sector and does not yet capture the impact of recent favorable conditions of mortgage rates.”

Yun added that while pending contracts have reached their lowest mark since 2014, there is no reason to be overly concerned, and he predicts solid growth potential for the long-term.

Not everyone agrees: as Bloomberg notes, the poor results underscore the challenges as elevated prices and higher mortgage rates keep many  Americans on the sidelines of the housing market. Economists consider pending-home sales a leading indicator because they track contract signings; purchases of existing homes are tabulated when deals close, typically a month or two later.

Pending home sales fell in the Midwest and South, which both dropped more than 2 percent from the prior month, while the Northeast and West saw increases. At the same time, all four major regions sustained a drop when compared to one year ago, with the West taking the brunt of the decrease. “The West crawled back lightly, but is still experiencing the biggest annual decline among the regions because of unaffordable conditions,” Yun said.

Yun suggests that affordability challenges in the West are part of the blame for the drop in sales. Home prices in the West region have risen too much, too fast, according to Yun. “Land cost is expensive, and zoning regulations are too stringent. Therefore, local officials should consider ways to boost local supply; if not, they risk seeing population migrating to neighboring states and away from the West Coast.”

While the report doesn’t signal a dramatic collapse in housing, the recovery may have trouble gaining traction. Previously released NAR data showed purchases of previously owned houses rose for a secondstraight month and exceeded forecasts in November.

Finally, not even Larry could spin the report as bullish admitting that the latest government shutdown will harm the housing market. “Unlike past government shutdowns, with this present closure, flood insurance is not available. That means that roughly 40,000 homes per month may go unsold because purchasing a home requires flood insurance in those affected areas,” Yun said. “The longer the shutdown means fewer homes sold and slower economic growth.”

That said, he did leave off on a positive note, with Yun saying he believes that there are good longer-term prospects for home sales. “Home sales in 2018 look to close out the year with 5.3 million home sales, which would be similar to that experienced in the year 2000. But given the 17 million more jobs now compared to the turn of the century, the home sales are clearly under performing today. That also means there is steady longer-term growth potential.”