While Bank of America had warned investors to brace for a dismal retail spending print in January, expectations remained positive (albeit just a 0.1% MoM move) for December’s (delayed due to shutdown) official spending data today. As a reminder, on Tuesday ZeroHedge reported that retail sales ex-autos, as measured by the aggregated BAC credit and debit card data, tumbled 0.3% month-over-month seasonally adjusted in January – the biggest drop in three years. This followed a flat reading in retail sales ex-autos in December. 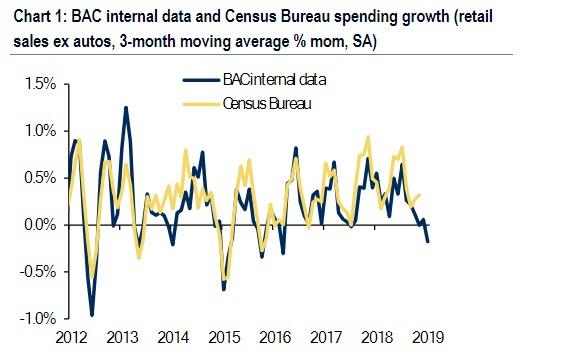 Turning to the January BAC internal data, in January, spending for 4 only out of 14 sectors increased in the month, showing broad-based weakening.

As a reminder, Retail Sales for the Control Group soared in November (+0.9% MoM) so some slowdown was expected; but, the government’s official retail spending data for December confirmed BofA’s concerns and plunged…

That is the biggest MoM drop in retail sales since 2009 for the headline and the biggest drop in the control group since the 9/11 attacks in 2001!…

“It appears to contrast quite sharply with reports of Christmastime sales that were generally seen as quite healthy,” and for the Fed, “rate normalization is on the back burner for a long time to come.”

The collapse was broad-based…

Needless to say, this will be a disaster for Q4 GDP forecasts which we now expect to print in the low 1% range.

“While there are a number of special factors that skew the data, the softening of late has revealed the weakest trend for consumer spending since mid-2016.”