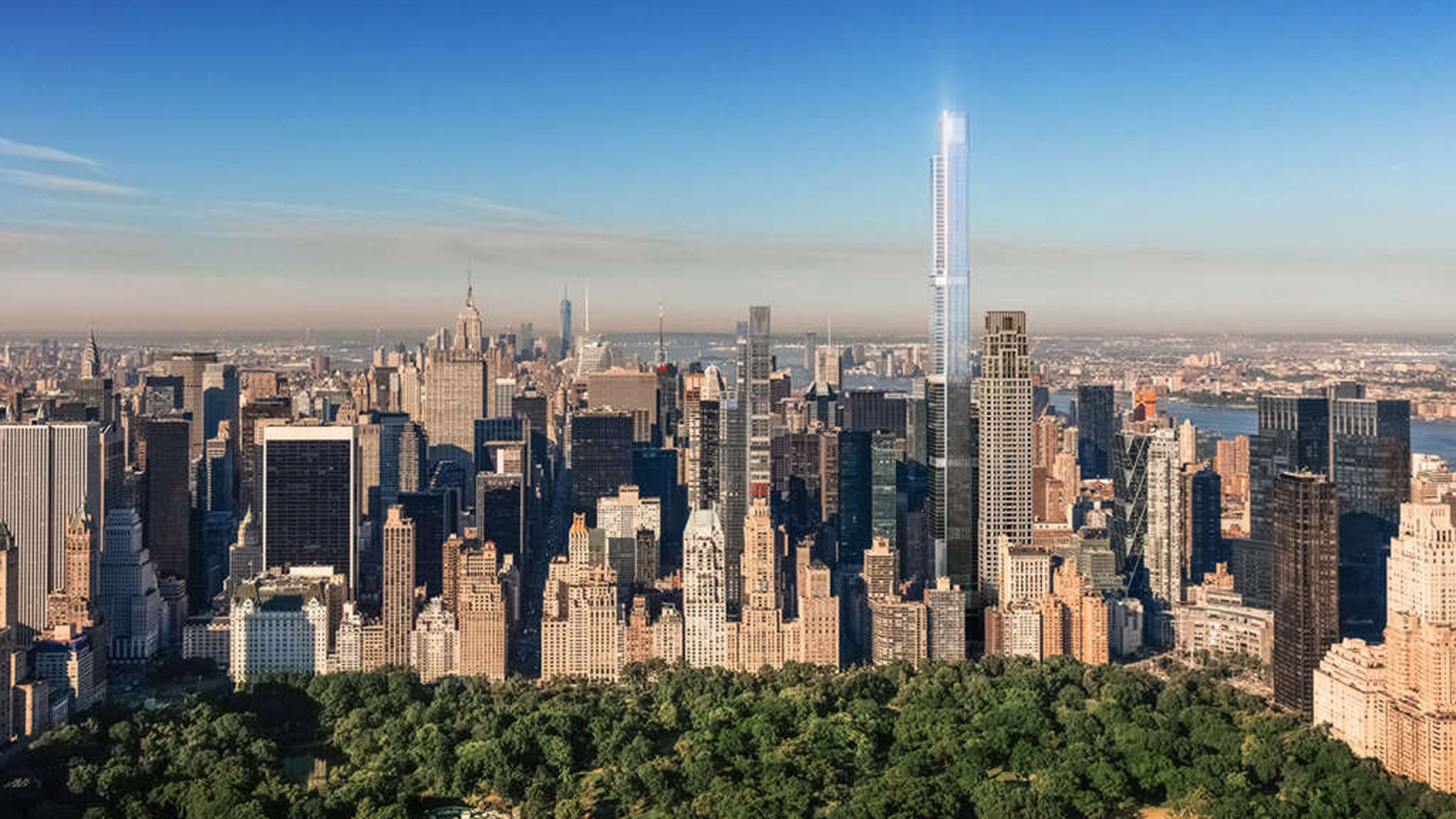 (The Wall Street Journal) Gary Barnett was sitting in his Manhattan office one morning in the fall when his old-fashioned flip phone started to buzz. On the line was a real-estate agent who was marketing the New York developer’s latest condo project, a soaring 1,550-foot tall building known as Central Park Tower. With a total projected sellout of more than $4 billion, the skyscraper is the country’s priciest-ever condominium project and, when complete, will be the tallest residential building in the world.

The agent had bad news. Mr. Barnett had…

Gary Barnett was sitting in his Manhattan office one morning in the fall when his old-fashioned flip phone started to buzz. On the line was a real-estate agent who was marketing the New York developer’s latest condo project, a soaring 1,550-foot tall building known as Central Park Tower. With a total projected sellout of more than $4 billion, the skyscraper is the country’s priciest-ever condominium project and, when complete, will be the tallest residential building in the world.

The agent had bad news. Mr. Barnett had agreed to reduce a condo’s asking price, but now the client refused to sign a non-disclosure agreement concealing the details of the deal. Mr. Barnett’s response: Turn him away. “If we’re going to give someone a special deal, we don’t want them saying it all over the market,” he said.

This is a harsh new reality for Mr. Barnett, who has made a fortune fulfilling the real-estate dreams of the world’s elite. The Extell Development Co. founder kicked off the U.S. condo boom with One57, the first of the supertall towers that line the 57th Street corridor now known as Billionaire’s Row. The building’s penthouse sold for $100.5 million in 2014 to tech mogul Michael Dell, the record high for New York City.

His success opened the door for other high-end towers across the city, permanently altering the Manhattan skyline. “The frenzy around One57 gave everyone the idea that this was a market that was ripe to be harvested,” said real-estate appraiser Jonathan Miller.

Central Park Tower is by some measures more audacious than anything that’s preceded it. The supertall skyscraper will feature panoramic views of the city and offer amenities like indoor and outdoor swimming pools, a 1,000-foot-high private club and a basketball court. Of the building’s 179 units, no fewer than 18 are priced above $60 million.

Gary Barnett kicked off the U.S. condo boom with One57. Central Park Tower, shown in a rendering, is the company’s latest project on Manhattan’s Billionaire’s Row.

Mr. Barnett is marketing this super-luxury tower in a challenging climate: Manhattan home sales plunged by 14% in 2018, the steepest drop the industry has seen since the financial crisis in 2009, according to a report by brokerage Douglas Elliman Real Estate. Today, developers are slashing prices amid an oversupply of new luxury condos.

Some people wonder if Mr. Barnett will become a victim of the condo explosion he helped create. The great Manhattan condo boom “started with One57,” said Mr. Miller, “and it may end with Central Park Tower.”

Earlier this week, Mr. Barnett announced that he had hired Sush Torgalkar, formerly the chief operating officer of Westbrook Partners, as CEO to assist in managing the company’s growth. Mr. Barnett will stay on as the company’s chairman.

A self-described “poor boy from the Lower East Side,” Mr. Barnett grew up as Gershon Swiatycki, the son of a Talmudic scholar. His entry into the world of luxury goods came in 1980s, when he met his first wife Evelyn Muller, whose father owned a diamond business. Mr. Barnett traded precious stones in Belgium for over a decade before starting to invest in U.S. real estate.

Arriving at the sales office in a dark suit with black sneakers and a bold, flowered tie that he said is “probably 20 years old,” the 63-year-old developer is an unlikely purveyor of luxury homes. An observant Jew who largely eschews the flashy trappings of the industry, Mr. Barnett lived in Queens until moving recently with his wife and children to the heavily Orthodox suburb of Monsey, N.Y., about an hour’s drive north of the city. (He keeps a one-bedroom unit at One57 to make more time for work.)

Mr. Barnett’s refusal to give up the antiquated flip phone is a source of indulgent eye-rolling from colleagues. He often avoids computers, said a person who has worked with him; instead, his assistant prints out his emails and leaves them on his desk, where he annotates them in what one employee describes as “serial-killer scrawl” for staff to decipher.

Other Manhattan developers thought Mr. Barnett was crazy when he started building One57 in 2010, the depths of the real-estate downturn. And after no major U.S. lenders would back him, he turned to the Middle East to obtain financing from two of Abu Dhabi’s wealthiest investment funds.

His gamble paid off handsomely. As One57 started sales, U.S. economic growth snapped back. As one of the few new luxury condo buildings on the market, One57 attracted billionaires from Russia, China and the Middle East. The condominium is the first ever New York City building to break the $100 million threshold for a single condo.

Central Park Tower faces a far more crowded field of competitors—including One57, where Extell still has units to sell. Approximately 3,763 new Manhattan condo units are in the pipeline for 2019, followed by an additional 4,539 in 2020, new development marketing firm Corcoran Sunshine said late last year. By contrast, in 2011 when One57 started sales, only 277 Manhattan new units launched.

Today, the builders of pricey mega-towers “are going to find themselves in a lot of trouble,” said Andrew Gerringer of the Marketing Directors, a development-marketing firm. “Those are just going to be really difficult to sell.”

But Mr. Barnett is pulling out all the stops. In a newly opened sales office at Central Park Tower, potential buyers sip Champagne and Johnnie Walker Black Label amid a onyx-clad walls and Lalique crystal chandelier. In a dimly lighted room with 14-foot ceilings, strains of Gershwin’s “Rhapsody in Blue” fill the air as New York City landmarks are projected on the walls—Yankee Stadium, the Statue of Liberty, the Empire State Building. “Is there any place that has symbolized individual success and collective ambition as boldly as New York?” booms the voiceover, describing Central Park Tower as “1,550 feet of steel, ambition and aspiration anchored to 40,000 square feet of Manhattan schist…a shimmering beacon of class, optimism and chutzpah.”

Central Park Tower has already overcome some hurdles. When real-estate company Vornado Realty Trust started planning a competing condo two blocks north, Mr. Barnett stalled the project by taking control of a parking garage on Vornado’s property in addition to other property and air rights it owned on the block. Then Mr. Barnett refused to let Vornado tear down the parking garage to make way for its tower. The dispute was eventually resolved in 2013 when Vornado agreed to pay Extell $194 million for development rights on the block. As part of the settlement, both developers agreed to move their towers slightly so they both could have Central Park views.

Lining up financing for Central Park Tower was also a challenge, since banks have pulled back from financing ultra-luxury condos amid worries of oversupply. Mr. Barnett cobbled together debt from a public offering on the Israeli bond market and tapped the EB-5 program, which grants green cards to foreigners who invest in the U.S. He also brought on SMI USA, the U.S. subsidiary of the real estate investment firm Shanghai Municipal Investment, as a co-developer. Ultimately, Mr. Barnett began construction on Central Park Tower using Extell’s own funds before securing the money to finish it, an unusual move on such a large project. He had built more than 10 stories before J.P. Morgan Chase & Co. agreed to provide a $900 million construction loan. Now he must sell $500 million in apartments at Central Park Tower by December 2020 and pay down $300 million of his loan to J.P. Morgan Chase by the following year, according to information disclosed to Israeli bond investors, who have money in the project. If he fails to meet those deadlines, the bank can increase his interest payments.

Extell has many units to sell in addition to Central Park Tower, including One Manhattan Square on the Lower East Side, which has roughly 800 units.

Of the 179 units in Central Park Tower, no fewer than 18 are priced above $60 million.Photo: Dorothy Hong for The Wall Street Journal

In an email to brokers last month, Extell advertised major incentives at its projects, saying it would pay three to five years of common charges on any Extell condo purchased before the end of 2018—at Central Park Tower, that could save the buyer of a full-floor apartment about $120,000 per year. That incentive wasn’t renewed for 2019, although Extell is still paying a 50% commission to brokers and says it will roll out new incentives soon. With buyers “saying they’ll wait a little bit and see if prices come down more,” Mr. Barnett explained, “we want to give them an incentive to act.”

He declined to say how many units he’s sold at Central Park Tower, noting only that traffic had been “decent” and that he isn’t concerned about missing financing deadlines. “We’re certainly going through a dip in the market, but we’re priced for that dip,” Mr. Barnett said confidently. In the current market, he added, “you’ve got to be a little more flexible on price.”

Extell is also leveraging the roster of billionaires it accumulated during One57’s glory days. But the strategy could backfire, especially as sellers who bought condos there a couple of years ago are suffering losses. In one instance, Canadian billionaire Lawrence Stroll sold a One57 unit for $54 million, over $1 million less than what he paid in 2014. One57 has even seen a foreclosure, a rarity in New York’s high-end real estate. In 2017, an apartment that had been owned by shell companies linked to a Nigerian businessman sold in a foreclosure auction for $36 million, far less than the $50.9 million purchase price in 2014.

But these challenges seem to be part of the allure for Mr. Barnett, who said in comparison to his former business, he relishes the complexity of New York City real-estate deals. “These buildings are amazing buildings—they’re complicated, they’re fine-tuned,” he said. “Diamonds are a much simpler business.”

Since the emergence of ‘Billionaire’s Row’ in Manhattan, home values in the area have skyrocketed.