“You’ve really seen the limits of monetary and fiscal policy in its ability to extend out a long boom period.” – Josh Friedman, Co-Chairman of Canyon Partners (a “deep value,” credit-driven hedge fund)

(Dave Kranzler) The Fed’s abrupt policy reversal says it all. No more rate hikes (yes, one is “scheduled” for 2020, but that’s fake news), and the balance sheet run-off is being “tapered,” but will stop in September. Do not be surprised if it ends sooner. Listening to Powell explain the decision or reading the statement released is a waste of time. The truth is reflected in the deed. The motive is an attempt to prevent the onset economic and financial chaos. It’s really as simple as that. See Occam’s Razor if you need an explanation.

As the market began to sell off in March, the Fed’s FOMC foot soldiers began to discuss further easing of monetary policy and hinted at the possibility, if necessary, of introducing “radical” monetary policies. This references Bernanke’s speech ahead of the roll-out of QE1. Before QE1 was implemented, Bernanke said that it was meant to be a temporary solution to an extreme crisis. Eight-and-a-half years and $4.5 trillion later, the Fed is going to end its balance sheet reduction program after little more than a 10% reversal of QE and it’s hinting at restarting QE. Make no mistake, the 60 Minutes propaganda hit-job was a thinly veiled effort to prop up the stock market and instill confidence in the Fed’s policies.

Economic data is showing further negative divergence from the rally in the stock market. The Census Bureau finally released January new home sales, which showed a 6.9% drop from December. Remember, the data behind the report is seasonally adjusted and converted to an annualized rate. This theoretically removes the seasonal effects of lower home sales in December and January. The Census Bureau (questionably) revised December’s sales up to 652k SAAR from 621k SAAR. But January’s SAAR was still 2.3% below the original number reported. New home sales are tanking despite the fact that median sales price was 3.7% below January 2018 and inventory soared 18%.

LGI Homes (NASDAQ:LGIH) reported that in January it deliveries declined year-over-year (and sequentially), and Toll Brothers (NYSE:TOL) reported a shocking 24% in new orders. None of the homebuilders are willing to give forward guidance. LGI’s average sale price is well below $200k, so “affordability” and “supply” are not the problem (it’s the economy, stupid). 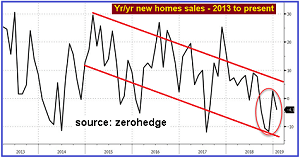 of units as estimated by the Census Bureau) sold for each month. I added the downward sloping trend channel to help illustrate the general decline in new home sales. As you can see, the trend began declining in early 2015.

Recall that it was in January 2015 that Fannie Mae and Freddie Mac began reducing the qualification requirements for government-backed “conforming” mortgages, starting with reducing the down payment requirement from 5% to 3%. For the next three years, the government continued to lower this bar to expand the pool of potential homebuyers and reduce the monthly payment burden. This was on top of the Fed artificially taking interest rates down to all-time lows. In other words, the powers that be connected to the housing market and the policymakers at the Fed and the government knew that the housing market was growing weak and have gone to great lengths in an attempt to defer a housing market disaster. Short of making 0% down payments a standard feature of government-guaranteed mortgage programs, I’m not sure what else can be done help put homebuyers into homes they can’t afford.

I do expect, at the very least, that we might see a “statistical” bounce in the numbers to show up over the couple of existing and new home sale reports (starting with February’s numbers). Both the NAR and the government will likely “stretch” seasonal adjustments imposed on the data to squeeze out reports which show gains, plus it looks like purchase mortgage applications may have bounced a bit in February and March, though the data was “choppy” (i.e., positive one week and negative the next).

E-commerce sales for Q4 reported last week showed a 2% annualized growth rate, down from 2.6% in Q3. Q3 was revised lower from the 3.1% originally reported. This partially explains why South Korea’s exports were down 19.1% last month, German industrial production was down 3.3%, China auto sales tanked 15% and Japan’s tool orders plummeted 29.3%. The global economy is at its weakest since the financial crisis.

It would be a mistake to believe that the U.S. is not contributing to this. The Empire State manufacturing survey index fell to 3.7 in March from 8.8 in February. Wall Street’s finest were looking for an index reading of 10. New orders are their weakest since May 2017. Like the Philly Fed survey index, this index has been in general downtrend since mid-2017. The downward slope of the trendline steepened starting around June 2018. Industrial production for February was said to have nudged up 0.1% from January. But this was attributable to a weather-related boost for utilities. The manufacturing index fell 0.4%. Wall Street was thinking both indices would rise 0.4%. Oops.

The economy is over-leveraged with debt at every level to an extreme and the Fed knows it. Economic activity is beginning to head off of a cliff. The Fed knows that too. The Fed has access to much more in-depth, thorough and accurate data than is made available to the public. While it’s not obvious from its public posture, the Fed knows the system is in trouble. The Fed’s abrupt policy reversal is an act of admission. I would say the odds that the Fed starts printing money again before the end of 2019 are better than 50/50 now. The “smartest” money is moving quickly into cash. Corporate insiders are unloading shares at a record pace. It’s better to look stupid now than to be one a bagholder later.