Last week investors were shocked when a barrage of major US corporations – including Boeing, Hilton, Wynn and a handful of PE portfolio companies – announced their decision to fully draw down on their existing credit lines. That said, for all the ominous banking crisis undertones – many still remember that one of the early symptoms of the global financial crisis was countless companies whose revolvers were pulled by a panicking banking sector – there was a common theme linking all these companies: they were all in sectors (airlines, casinos, lodging, energy) that were directly impacted by either the coronavirus pandemic or the recent oil price war.

Today, that changed when food giant Kraft Heinz – which should be benefiting generously from the recent food hoarding panic – was set to also draw down on its credit facility of as much as $4 billion, even though it faced none of the same coronavirus/oil headwinds as so many other companies that jumped the gun to boost their liquidity while they still could.

“We maintain our $4.0 billion senior credit facility, and subject to certain conditions, we may increase the amount of revolving commitments and/or add additional tranches of term loans in a combined aggregate amount of up to$1.0 billion,” the company said.

Speaking to Bloomberg, which first reported the draw down of the Buffett-owned company, a Kraft Heinz spokesman said that “the demand for our brands, our cash flow and our balance sheet remain strong,” which is a rather bizarre explanation why it would need billions more in liquidity. “As a matter of practice, we typically maintain a conservative liquidity posture, which is even that much more important as we focus on making sure all our products remain available to the public during these challenging times.”

One possible reason for Heinz’s liquidity problems is that while other sectors have been crippled by the ongoing dual viral-oil shock, the ketchup maker has seen it share of corporate woes in recent years, most recently its downgrade to junk by S&P Global Ratings and Fitch Ratings, when it also warned that the downgrades may limit its access to financing sources such as the commercial paper market, requiring it to use alternative funding sources such as its senior credit facility.

And, as we discussed yesterday, the commercial paper market is starting to freeze up (something the Fed failed to address in its emergency Sunday announcement) which is forcing companies like Heinz to seek alternative, last ditch sources of liquidity.

Indeed, as Bloomberg noted today, issuance of commercial paper dropped to 3,125 transactions on March 13, according to figures released Monday; that’s down 13% from the average daily rate in the week ending March 6 and 18% since February. At the same time, a closely watched CP spread – that between three-month AA rated financial and non-financial commercial paper rates versus overnight index swaps – shows some of the most stress since the financial crisis. 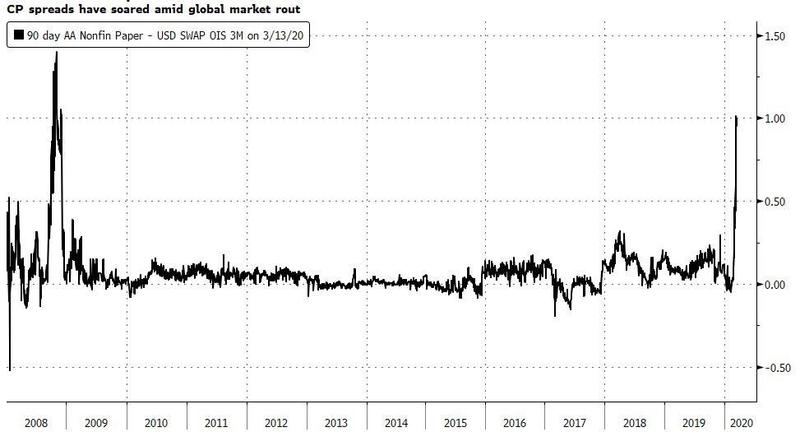 “I am not surprised, liquidity is the lifeblood of these types of programs,” said Scott Kimball, a portfolio manager at BMO Global Asset Management. “When markets lock up like this, interest rates surge to levels that are unsustainable for business.”

Yet what is odd, is that Kraft Heinz said in a regulatory filing last month that it had no commercial paper outstanding at the end of 2019 and that the maximum amount it held during last year was $200 million.

So maybe the company’s rush to its banking syndicate is simply that: a panicked attempt to grab as much cash as it can before it is locked out as banks go into cash conservation mode, something their halt of stock buybacks made quite clear is coming.

Created in a catastrophic merger five years ago orchestrated by Warren Buffett’s Berkshire Hathaway and private equity firm 3G Capital, Kraft Heinz is in the midst of a turnaround as its brands fall out of favor with consumers. Its shares have crashed 16% in the past month, less than the decline of the S&P 500 Index, amid ongoing consumer demand for food and beverages, although today’s revolver news will hardly excite investors.