With the travel industry staggered by the coronavirus outbreak, Marriott International said Tuesday it planned to furlough tens of thousands of workers in the face of unprecedented booking cancellations. 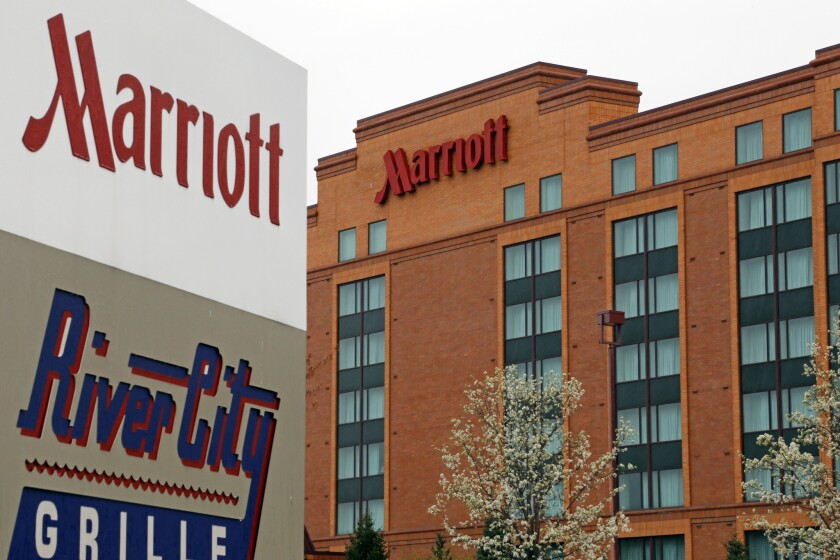 The world’s largest hotel company, with 30 hotel brands and more than 7,000 properties worldwide, confirmed reports that it will be forced by a surge in cancellations to either cut back work hours or issue furloughs to a large portion of its workforce. Marriott International employed 174,000 people around the world at the end of 2019, according to securities filings.

“We are adjusting global operations accordingly, which has meant either reduction in hours or a temporary leave for many of our associates at our properties,” the company said in a statement Tuesday. “Our associates will keep their health benefit during this difficult period and continue to be eligible for company-paid free short-term disability that provide income protection should they get sick.”

Marriott’s announcement signals that the blow that has already shook the airline industry, theme parks, ski resorts and restaurants has started to rattle the U.S.’s $660-billion hotel and lodging industry.

Already the impact has surpassed the economic blow of the Sept. 11, 2001, terrorist attacks, according the American Hotel and Lodging Assn. and the U.S. Travel Assn., which estimates that the hotel industry is losing $1.4 billion a week.

“Based on current estimates, approximately 1 million direct hotel jobs, or 45% of all hotel jobs, have either been eliminated or will be eliminated in the next few weeks,” the two trade groups said in a statement. ” Current forecasts for a 30% drop in hotel occupancy over a full year would result in nearly 4 million total jobs being lost.”

Marriott did not address how many workers would be furloughed, but the company confirmed that news reports Tuesday about “tens of thousands” of employees being furloughed were accurate.

“While the ultimate impact is difficult to predict at this time given the fluidity of the situation, we remain confident in our long-term prospects,” the Marriott statement said.

In Las Vegas, 14 hotels along the Strip temporarily closed Tuesday, as well as all the hotels and restaurants in Yosemite National Park.

In Southern California, the opening of the 466-room JW Marriott that was scheduled for Monday in Anaheim was postponed indefinitely. The Disneyland Hotel and the Grand Californian at the Disneyland Resort have closed, along with the Great Wolf Lodge in Garden Grove.

The Los Angeles City Council is scheduled to consider Tuesday an emergency measure to require employers faced with economic hardships to fire workers with the lowest seniority first and to have a documented just cause before permanently dismissing employees.

To help hotel workers who have already been fired, a coalition of labor groups, including Unite Here, Local 11, organized a food distribution program Tuesday at the Hospitality Training Academy.