Anyone that was hoping for a “quick recovery” for the U.S. economy can forget about that right now.  Yes, many states are attempting to “reopen”, but in most cases it will be a multi-stage process that takes many months to complete.  Meanwhile, fear of COVID-19 is going to keep many Americans from conducting business as usual even after all of the restrictions have been finally lifted.  Even now, many of the stores, restaurants and movie theaters that have reopened are seeing very, very few customers.  Unfortunately, millions of small businesses are not going to be able to survive in such a depressed economic environment for very long.

It has been this way for years, but millions of small business owners just kept soldiering on because they wanted to work for themselves and not some corporate behemoth.

But for most small businesses things have never been easy.  For most of them, it is usually such a struggle to try to eke out a very meager profit at the end of the month after covering expenses and payroll.  But now COVID-19 has come along, and many small businesses haven’t had any revenue for weeks.

The good news is that the lock downs are starting to end, but the bad news is that many small business owners are facing a “new normal” in which their monthly revenues will be down by 30, 40 or 50 percent (or more).  All of a sudden many small businesses that were once barely profitable have been transformed into businesses that are bleeding a lot of cash each month, and many of them simply are not going to make it.

It was always obvious that this pandemic would kill a lot of those businesses, but the true scope of the problem wasn’t apparent until now.  According to Bloomberg, a survey that was just conducted found that 52 percent of U.S. small business owners “expect to be out of business within six months”…

That’s according to a new survey from the Society for Human Resource Management which found that 52% expect to be out of business within six months. The survey of 375 firms was conducted between April 15-21 and doesn’t account for improved business conditions as some U.S. states reopen this month.

Yes, the big corporate giants dominate our society today, but there are still lots and lots of small businesses out there.

Ultimately, we are talking about millions upon millions of businesses that are about to be destroyed…

“SHRM has tracked Covid-19’s impact on work, workers, and the workplace for months,” said SHRM Chief Executive Officer Johnny C. Taylor, Jr., “but these might be the most alarming findings to date. Small business is truly the backbone of our economy. So, when half say they’re worried about being wiped out, let’s remember: We’re talking about roughly 14 million businesses.”

Around the country, governors can choose to end the lock downs, but they can’t order customers to go out and spend money.

And considering the fact that more than 30 million Americans have lost their jobs over the last six weeks, a lot of them don’t have money to spend anyway.

But even if everyone was still working, there is a large segment of the population that will simply be afraid to venture into public places as long as this pandemic is going on.

If you doubt this, just consider what we are witnessing in Texas.  Reuters sent a reporter to one of the most popular malls in Austin, and what that reporter discovered is quite sobering…

A dozen or so people were strolling about the sprawling open-air shopping center Monday afternoon, with three seated on the patio of a Tex-Mex restaurant. Only one shopper wore a mask, and the loudest noises were from songbirds perched in the live oak trees along the deserted pedestrian thoroughfares.

“I’ve seen one customer today – they didn’t buy anything,” said Taylor Jund, who was keeping watch over an empty Chaser clothing store. “There’s absolutely no one coming around here.”

If even 20 percent of customers stay away for the foreseeable future, that is going to be enough to kill millions of small businesses.

So the truth is that we are facing a major national crisis.

A while back, Congress passed a bill that was supposed to help small businesses survive the lockdowns, but as I mentioned in a previous article it looks like that program has been a massive failure…

According to the CNBC/SurveyMonkey Small Business Survey released Monday, which surveyed 2,200 small business owners across America, while the $660 billion Paycheck Protection Program was instituted to give them a lifeline through the coronavirus and economic shutdown, only 13% of the 45% who applied for the PPP were approved.

We really are caught in a downward spiral now.  We desperately need to get Americans back to work so that they can start earning paychecks again, but with so few customers right now, businesses will continue to lay off even more workers in the weeks and months ahead.

Meanwhile, the cost of living is actually going up.  Thanks to the ongoing meat shortages, fresh meat prices are escalating quite rapidly…

Fresh meat prices escalated 8.1% in stores, compared to the same period last year, according to Nielsen data for the week ending April 25.

Experts expect prices to skyrocket in the coming weeks, as meat processing plants across the U.S. are forced to close due to the coronavirus pandemic. Pork and beef prices could increase by as much as 20% compared to 2019, according to a new report from CoBank, a cooperative bank that is part of the Farm Credit System.

The economic collapse that so many have been warning about is here, and it is going to continue whether there are lock downs or not.

18 million Americans remain convinced that these layoffs are just temporary and they will have their jobs back in six months. Given this survey, we suspect that number is extremely optimistic. 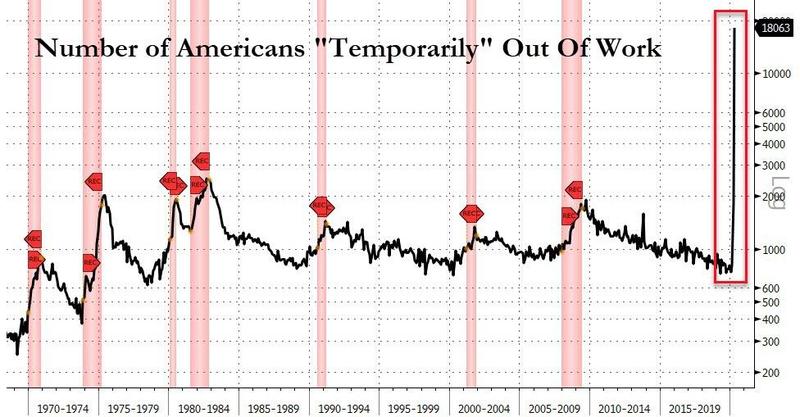 But nobody is going to be able to stop the process that has now begun, and economic conditions will ultimately become far worse than most Americans would dare to imagine.