How are 19.29 million workers receiving unemployment insurance when they tell us 17.75 million are unemployed?

It’s official: “data” released from the Bureau of Labor Statistics has just crossed the streams and has given birth to the Stay Puft marshmallow man jumping the shark. Alas, it also means that jobs “data” is now completely meaningless.

For all the analysis of today’s job report, is it good, is it bad, is this data series too hot, and does it mean that the Fed will soon be forced to hike, we have just one response. None of it matters.

Why? Because a simple sanity check reveals that as of this moment the jobs report no longer makes logical sense.

Alas, as of this moment, the definitionally smaller circle is bigger than “bigger” one, and as the DOL reported today, there were 19.29 million workers receiving unemployment insurance. And yet, somehow, at the same time the BLS also represented that the total number of unemployed workers is, drumroll, 17.75 million.

If you said this makes no sense, and pointed out that the unemployment insurance number has to be smaller than the total unemployed number, then you are right. And indeed, for 50 years of data, that was precisely the case. 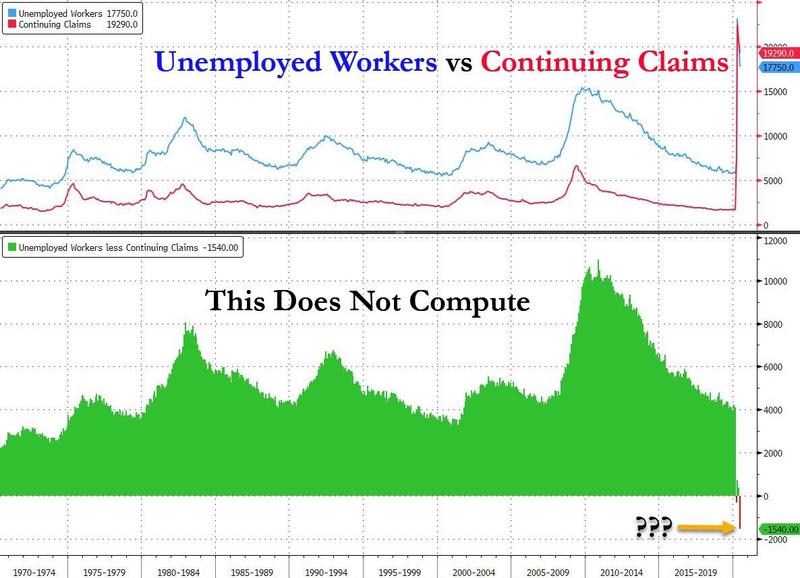 And yes, there is a “forced” explanation to justify how this may actually happen in the current situation where everyone is abusing jobless benefits, but in theory this should not be happening, and we fully expect that in the coming weeks, the already highly politicized BLS will quietly close this gap.