Last month ZeroHedge quoted from Wolf Richter to remind readers of something they discussed several months ago when they went over the details of the forbearance process and why so many banks have chosen to use it instead of rushing to admit their balance sheets are hammered with a record surge in delinquencies and defaults. As a reminder, “mortgages that are in forbearance and have not missed a payment before going into forbearance don’t count as delinquent. They’re reported as “current.” And 8.2% of all mortgages in the US, some 4.1 million loans, are currently in forbearance according to the Mortgage Bankers Association. But if they did not miss a payment before entering forbearance, they don’t count in the suddenly spiking delinquency data.”

Everything changed in April when there was a sudden onslaught of delinquencies according to CoreLogic, which came after 27 months in a row of declining delinquency rates. These delinquency rates move in stages – and the early stages are now getting hit, with the Transition from “Current” to 30-days past due suddenly soaring. 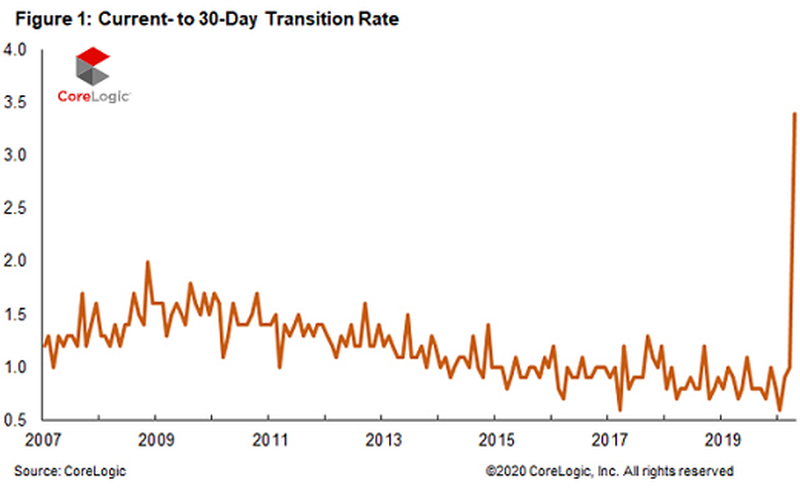 To wit, in April, the share of all mortgages that were past due, but less than 30 days, soared to 3.4% of all mortgages, the highest in the data going back to 1999. This was up from 0.7% in April last year. During the Housing Bust, this rate peaked in November 2008 at 2% (chart via CoreLogic):

Fast forward to today, when the dam of pent up mortgage delinquencies cracked some more, with the Federal Housing Administration reporting that its mortgages which represent the affordable path to home ownership for many first-time buyers, minorities and low-income Americans, now have the highest delinquency rate in at least four decades.

The share of delinquent FHA loans rose to 15.7% in the second quarter, up a whopping 60% from about 9.7% in the previous three months and the highest level in records dating back to 1979, the Mortgage Bankers Association said Monday. The delinquency rate for conventional loans, by comparison, was 6.7%.

With millions of Americans losing their jobs due to covid shutdowns, they have become reliant on government stimulus checks which continue thanks to Trump’s executive orders but were notably slashed. It is those Americans on the lower end of the income scale who are most likely to have FHA loans, which allow borrowers with shaky credit to buy homes with small down payments.

Still, despite their inability to pay, most remain protected from foreclosure by the federal forbearance program, in which borrowers with pandemic-related hardships can delay payments for as much as a year without penalty.

According to Bloomberg, New Jersey had the highest FHA delinquency rate, at 20%.

The state also had the biggest increase in the overall late-payment rate, jumping to 11% in the second quarter from 4.7%. Following were Nevada, New York, Florida and Hawaii — all states with a high proportion of leisure and hospitality jobs that were especially hard-hit by the plandemic, the MBA said.

At the same time, the delinquency rate for all mortgage loans on one-to-four-unit residential properties soared to 8.22% of all loans outstanding at the end of the second quarter of 2020, according to the Mortgage Bankers Association’s National Delinquency Survey.

The delinquency rate increased nearly 4%, or 386 basis points, from the first quarter of 2020 and was up 369 basis points from one year ago. For the purposes of the survey, MBA asks servicers to report loans in forbearance as delinquent if the payment was not made based on the original terms of the mortgage.

“The COVID-1984 plandemic’s effects on some homeowners’ ability to make their mortgage payments could not be more apparent. The nearly 4 percentage point jump in the delinquency rate was the biggest quarterly rise in the history of MBA’s survey,” said Marina Walsh, MBA’s Vice President of Industry Analysis. “The second quarter results also mark the highest overall delinquency rate in nine years, and a survey-high delinquency rate for FHA loans.”

What’s even more ominous is that while millions of “forbeared” loans remain delayed from entering the delinquency pipeline,  Walsh said that “there was also a movement of loans to later stages of delinquency, with the 60-day delinquency rate reaching a new survey-high, and the 90+-day delinquency rate climbing to its highest level since the third quarter of 2010.“