Based on 85 monthly individual factors, The Chicago Fed’s National Activity Index unexpectedly plunged in February. Against expectations of a +0.75 print, the data showed a -1.09 (a reading below 0 indicates below-trend growth in national economy). 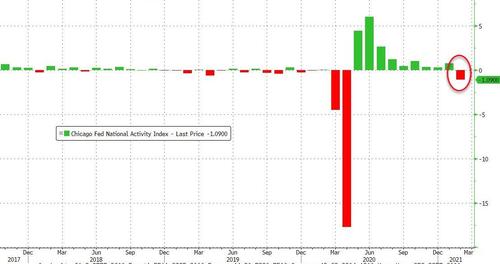 This is the first decline since April 2020.

34 of the 85 monthly individual indicators made positive contributions, while 51 indicators affected the index negatively (led by declines in indicators related to production and personal consumption and housing).

But, of course, none of that matters now that around $2 trillion of malarkey is about to wash away any anxiety (for now).