Despite trillions in Fed “stimulus” and endless government handouts, John Stanford, co-executive director of the Small Business Roundtable, told CNBC this week that “it continues to be a very painful time for small businesses.”

“We have to remember, PPP was a bridge program,” Stanford said.

“It was meant to keep people on the payroll, it wasn’t meant necessarily to keep businesses open.”

In what will likely come as a surprise to many, amid political pressure to reopen nationwide – since lock downs have been shown to be utterly useless – 22% of U.S. small businesses were closed in February, up significantly from October’s 14%, and back near May’s pandemic peak when 23% of small and medium-size businesses closed (just 1 percentage point higher than the current closure rate).

The report, from Facebook and the Small Business Roundtable, found that different areas of the country were experiencing varying degrees of difficulty. 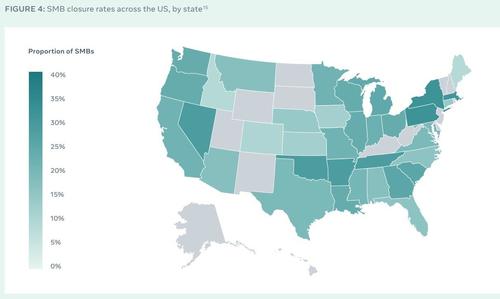 Some states, like Maine, Idaho and Colorado, were seeing 9%-10% closures, while others like New York, Pennsylvania, and Massachusetts were seeing at least 30% closed.

“While larger companies with larger capital reserve may be doing OK, small businesses can’t just take the risk to stay open, and I think we’re seeing that play out with these high numbers,” warned Stanford, adding that despite the currency vaccine and Biden Bailous hope, 51% of the businesses surveyed said they were not planning to rehire former employees within the next six months.

Small business leaders expressed their renewed sense of desperation in the survey:

“After 26 years as an owner of this business, very close to total collapse.”

“The pandemic not only shut my doors, but it created massive competition should I even consider returning to operations.”

“As much as I would love to support small businesses, I need to be more careful of how I spend money at the time.”

“I do prefer to shop at small businesses, but during the current situation that is hard. Many do not have websites online.”

“Bigger businesses tend to be more convenient for online ordering and cheaper.”

It would seem SBR’s Stanford knows this too: “PPP and others really helped get us through a shutdown of a year’s economy, but I think we’ve got a tough road ahead.”