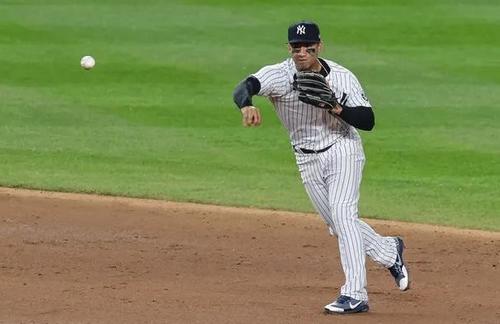 In an unsettling reminder that COVID-19 is still spreading, even as a scandal-scarred Gov. Andrew Cuomo pushes ahead with reopening the Empire State – and even as practically everybody in the organization has already been vaccinated – the Yankees have seen their starting lineup crippled (shortstop Gleyber Torres was kept out of Wednesday’s starting lineup during a game against Tampa Bay) and a number of coaches and staff sidelined due to a sudden flareup of COVID-19.

But the surprising thing is that the Yankees have essentially required players and staff to get vaccinated, so this latest outbreak is afflicting staff and players who have already been fully vaccinated.

The Yankees – which, like the Mets, are reportedly planning to segregate fans in to “vaccinated” and “unvaccinated” sections – have tested all players and staff at least three times since Tuesday.

Manager Aaron Boone shared more information on the situation inside the team on Wednesday in a COVID-themed update that sounded like an unwelcome relic from last season.

…Boone said MLB’s Joint COVID-19 Health and Safety Committee is waiting and reviewing a number of test results. The members of New York’s traveling party have been tested at least three times each since Tuesday.

“I know everybody is going to read into that but hopefully it’s nothing, it’s more just getting all the information,” Boone said of Torres.

Boone said the Yankees expect to receive an update about Torres on Wednesday night. He added that Torres tested positive for COVID-19 in December and has been vaccinated.

“We’re seeing the vaccinations also kind of blunt the effects of the virus,” Boone said. “We’re also learning as we go and getting informed as what we need to do exactly and just try to do as best we can to be able to make quick adjustments on the fly. Just doing the best we can with it all.”

Pitcher Jameson Taillon said the team has been doing a good job of rolling with the punches.

“We’ve been dealing with this thing now for over a year,” Yankees pitcher Jameson Taillon said. “We’re just going to roll with the punches and try to protect each other, and do our responsibility to keep everyone safe. But we’re here and we’re to play.”

Still, word about the positive tests has clearly become a threat to “the narrative”, because in his Friday morning DealBook newsletter, Andrew Ross Sorkin (of NYT & CNBC fame) addressed the issue directly:

Eight fully vaccinated members of the baseball team tested positive for the virus. Some may interpret it as a lesson for businesses when workplaces loosen their protocols for things like masking, even if a majority of employees are vaccinated….Others argue that the Yankees’ frequent testing makes asymptomatic cases more likely to be caught, and given that only one of the eight has shown symptoms, it’s a sign that the vaccines are effective.

New York City is planning to “fully reopen” on July 1, and last night President Biden decreed that Americans who have been fully vaxxed can finally dispense with wearing masks.

Big news from the CDC: If you’re fully vaccinated, you do not need to wear a mask – indoors or outdoors, in most settings.

We’ve gotten this far. Whether you choose to get vaccinated or wear a mask, please protect yourself until we get to the finish line. pic.twitter.com/XI4yPmhWaD

While Pfizer and Moderna have confronted stories like this in the past by reminding the public that their vaccines are only 95% effective. But how can it explain larger outbreaks like this?

Or are these asymptomatic positives simply the result of false positives produced by high-cycle PCR thresholds?