While Wells Fargo is scrapping credit lines for ordinary middle-class Americans, the biggest banks in the US are still doling out mega-mortgages to their pals like it’s nothing. 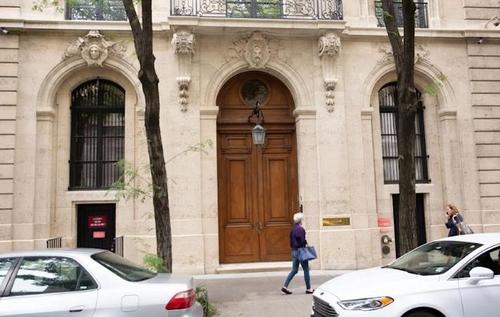 Accoridng to Bloomberg, Goldman Sachs banker Michael Daffey just obtained a $30.6MM loan from Citigroup to buy one of the most infamous pieces of real estate in the US: the Manhattan townhouse formerly owned by Jeffrey Epstein. Daffey, who was recently named chairman of crypto investment bank Galaxy Digital (run by his old friend and former Goldman colleague Mike Novogratz), received the 30-year mega-mortgage back in May, two months after he bought the townhouse located at East 71st Street. He got the mortgage a few months after he purchased the townhouse for a deeply discounted $51MM (the property was marked down 40% from its original asking price of $88MM).

Dalley was previously chairman of Goldman’s Global Markets Division before he left the company.

The limestone mansion, built in the 1930s on the Upper East Side, was first listed for sale about a year after Epstein’s August 2019 death. During the days after the billionaire pedophile’s arrest, onlookers crowded the house and took photos as camera crews surrounded the home.

The entrance is famously adorned with Epstein’s initials: “J.E.” (we imagine Dalley will want to have those removed). According to BBG, crowbar marks and other signs of how authorities Its heavy wood doors bore crowbar marks — evidence of how authorities forced their way in.Before Epstein, the home belonged to L Brands founder Les Wexner, Epstein’s most important client for years. In 2011, the home’s deed was transferred to an Epstein company in the U.S. Virgin Islands.

As BBG points out, the transaction offers “a glimpse at how the rich leverage assets for liquidity.” Bankers, of course, have been keen, if not overeager, to make super-sized mortgages backed by valuable collateral.

Meanwhile, as credit demand by average Joe’s starts roaring back… 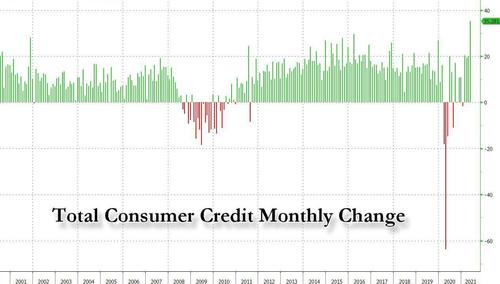 …lenders are starting to cut down on their exposure.