Yesterday, when covering the non-stop drama surrounding China’s most insolvent property developer, Evergrande, we said that it would be remarkably ironic if Evergrande were to announce a default – which everyone knows is coming – today, on the 13th anniversary of Lehman’s bankruptcy filing on Sept 15, 2008.

Well, in this delightfully absurd world we live in, that’s just what happened only instead of Evergrande making the announcement, it was the entity that will soon control the massively overlevered property developer that made it for them: the Chinese government.

According to Bloomberg, Chinese authorities told major lenders to China Evergrande Group not to expect interest payments due next week on bank loans, which takes the cash-strapped developer a step closer the nation’s largest modern-day restructurings, and guarantees that China’s “Lehman Moment” is now just a matter of days, if not hours.

According to Bloomberg, citing unnamed sources, the Ministry of Housing and Urban-Rural Development told banks in a meeting this week that Evergrande won’t be able to pay its debt obligations due on Sept. 20, and instead most of Evergrande’s working capital in now being used to resume construction on existing projects, the housing ministry told bankers, according to a Bloomberg source.

And since nonpayment of interest and principal will represent an event of default, the company is unlikely to make any subsequent interest, or principal, payments either since it will have already default even though Bloomberg claims that “Evergrande is still discussing the possibility of getting extensions and rolling over some loans.” It won’t, especially since the developer will also miss a principal payment on at least one loan next week, which means it’s game over.

Meanwhile, as reported previously, Chinese authorities are already laying the groundwork for a debt restructuring of the $300 billion company (which recently hired Houlhan Lokey to advise it during the upcoming historic bankruptcy), assembling accounting and legal experts to examine the finances of the group. With senior leaders in Beijing silent on whether they will allow Evergrande creditors to suffer major losses, bondholders have priced in slim odds of a rescue infuriating countless investors and creditors who have mobbed the company’s offices across the country and also gathered at its HQ, demanding the company “return their money.” It won’t happen.

It’s unclear whether Evergrande, founded by billionaire Hui Ka Yan, intends to pay about $84 million of dollar-bond interest due Sept. 23. We doubt it: according to Bloomberg, Guangdong officials have turned down at least one bailout request from Hui, who owns a controlling stake in the developer.

The company’s complex web of obligations to banks, bondholders, suppliers and homeowners has become one of the biggest sources of financial risk in the world’s second-largest economy.

China banks and property firms tumbled after Bloomberg reported the delayed payments, while Evergrande dollar bonds and shares hit session lows Wednesday afternoon, after Bloomberg’s report, as bond investors are bracing for missed payments and as Moody’s and Fitch both downgraded Evergrande this month, citing an increasing likelihood of default. The Firm’s 8.75% note due 2025 fell 1.6 cents on the dollar to 25.8 cents as of 2:27pm in Hong Kong, according to Bloomberg-compiled prices. The 8.25% dollar bond due 2022 dropped 1.4 cents to 25.3 cents, on pace for record closing low. Shares fell as much as 6.1% to their lowest since January 2014.

As noted on Monday, Evergrande’s failure to meet its obligations on time has led to protests across China by homebuyers, retail investors and even the developer’s own staff, raising the prospect of social unrest if the property giant’s troubles spin out of control. The company said on Tuesday if it’s unable to repay debts on time or get creditors to agree to extensions or alternative arrangements, it may lead to cross-default.

Whether the selloff drags down the broader credit market may depend on the company’s ability to buy time with banks, as well as the overall state of the Chinese economy. A messy default on loans could stoke fears of widespread contagion, something Xi Jinping’s government has been keen to avoid even as it tightens financing restrictions on overstretched developers and discourages government bailouts.

Commenting on the upcoming fireworks, Keith Temperton, sales trader at Forte Securities said “The Asian banks will get hit hard if there’s a default, but then there will be a 10-year recovery process. The market’s getting a hang of it. The way they’ve managed the news flow seems quite clever. They haven’t let a swathe of bad news at once.”

That’s true, but as Mark Twain said, when explaining “How do you go bankrupt? Two ways. Gradually, then suddenly.” Until now we were in the “gradually” phase. Today, we just got to the “suddenly” part.

Evergrande Suspends Trading In All Bonds

Earlier today we pointed out that in what can (obviously) only be a remarkable coincidence, China’s largest, and most systematically important real estate developer, China Evergrande (and its $300+ billion in debt), collapsed on the 13th anniversary of Lehman’s bankruptcy filing, when Beijing told Evergrande’s creditor banks that the insolvent company, which recently hired Houlihan Lokey as bankruptcy advisor, would not pay interest on its debt next week, nor would it repay principal, in effect blessing the coming default.

And yet there was some trace of hope, because as Forte Securities trader Keith Temperton said “The Asian banks will get hit hard if there’s a default, but then there will be a 10-year recovery process. The market’s getting a hang of it. The way they’ve managed the news flow seems quite clever. They haven’t let a swathe of bad news at once” giving investors and creditors some hope that the money could still miraculously reappear.

Not any more: in an exchange filing on Thursday, Evergrande’s main unit (onshore real estate) said that trading in all of its onshore bonds would be suspended on Sept 16 to ensure fair information disclosure following a downgrade to A from AA (which in China is viewed as the lowest investment grade rating) by China Chengxin International, to wit:

In order to ensure fair information disclosure and protect the interests of investors, after the company’s application, all existing corporate bonds of Evergrande Real Estate will be suspended for one trading day from the opening of the market on September 16, 2021, and will be opened on September 17, 2021. 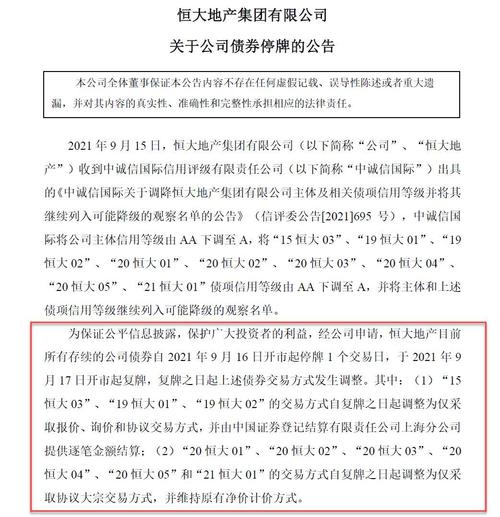 The press release ends with the hilarious “Investors are kindly requested to pay attention to investment risks.” Well… we sure can be certain they are paying attention now.

It wasn’t clear why the company would need to suspend trading in all bonds for an entire day to “ensure” that everyone was aware that the company’s bonds were no longer rated as investment grade in China (they should be rated as default but we’ll cross that bridge in time) when just a simple press release would suffice.

Instead, what the company did say is that the bonds would resume trading on Sept. 17, and the trading method for some of the securities will change to only allow block trades even as the previous pricing method will remain.

Despite the company’s promise that its bonds will resume trading, we somehow doubt it and instead we expect that in the coming months, the frozen bonds will be equitized as part of China’s largest ever debt for equity exchange. Come to think of it, the rest of the market doesn’t believe it either with Evergrande stock plunging another 7% (Zeno’s paradox means the company can keep falling at double digits every day in perpetuity) and as of Thursday Evergrande’s only traded security was at the lowest price since Oct 2011, on its way to 0.

Meanwhile, as the book on Evergrande’s story closes, the company’s imminent default and the sudden collapse in China’s property market which as we noted last night saw a 90% crash in land sales values in August…

… have led to a dire outlook for the nation’s developers and their creditors. As Bloomberg’s Richard Frost writes, Country Garden, the nation’s largest developer by sales, plunged 16% in the past two days, while Gemdale slumped 12% as a  gauge of property shares in Shanghai tumbled almost 5% in the period, with valuations firmly below book value. Following the news, Guangzhou R&F Properties drops 10.8% to the lowest since Dec. 2008 while Greentown China -9.1%. At this point, one can safely call it a crisis.

As contagion spread, risk is also hitting banks whose shares are suffering their fastest selloff in seven weeks. Furthermore, as discussed yesterday ahead of the coming Evergrande debt crisis, lenders in China are accepting the highest rates in four years to swap their dollars for yuan, a sign they may be preparing for what Mizuho calls a “liquidity squeeze in crisis mode.” 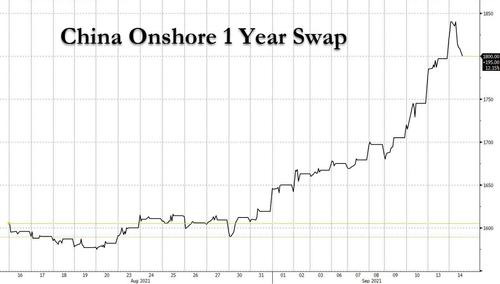 The pain will only get worse. China’s government is unlikely to ease up on its tough curbs toward the property market given its current priorities of promoting common prosperity and deterring excessive risk-taking, according to Macquarie. The property sector will be a “main growth headwind” for next year, although policy makers may loosen restrictions to defend 5% GDP expansion, Macquarie analysts wrote in a Wednesday note.

Adding to the pain, contagion concerns from Evergrande is making it more difficult for Chinese developers to refinance, despite a “critical” need to do so, according to Citigroup. Bond issuance is trickier onshore due to lower demand, and offshore due to increasing costs, they wrote in a Wednesday note. As we showed earlier this week, yields on China’s high-yield dollar have exploded rose to 13.7%, the highest since last year’s March market meltdown. 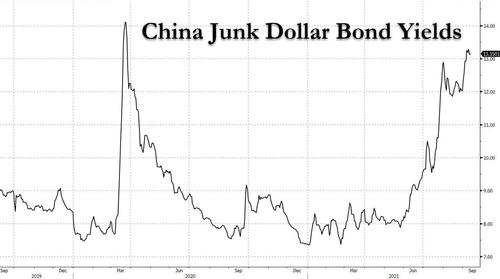 Finally, always last to the party, the rating agencies chimed in, with Fitch saying that smaller banks exposed to Evergrande or other weaker developers may face “significant” increases in non-performing loans in the event of a default, while S&P downgraded Evergrande deeper into junk, saying the developer’s liquidity and funding access “are shrinking severely.”