I don’t buy this. .Gov would not allow a union to blockade our national economy if they didn’t want it to be blockaded. What’s your take? 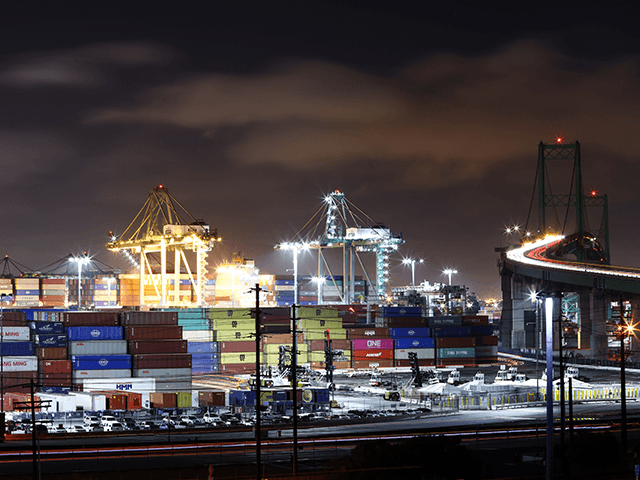 (Wendell Husebø) Identified as Alfred to Yahoo News, the longshoreman blamed Pacific Maritime Association (PMA) for “cutting the work” at the port, which is increasing the jam of containers stuck at sea and on the docks.

“They’re [PMA] the ones who are not training: skilled positions. [That] means crane operators, top handler drivers, trans drivers,” said Alfred. “They’re the ones who are keeping the ships out there at sea anchored.”

Despite the delays and mounting shipping costs American families and workers are experiencing, Alfred maintained “we have the manpower there, [they] just keep cutting the work.”

Alfred also said there is “not enough space” to offload the containers and stack it on the port, questioning the unions rules that are increasing the backlog. “There are truck drivers that come in and are waiting for a chassis and the company does not allow us to give them it,” Alfred said.

The port backlogs have often been blamed on too few truck drivers. President and CEO of the American Trucking Associations (ATA) Chris Spear told CNN last week the industry is short a record amount of drivers, 30 percent.

But a truck driver named Carlos Rameriz told Yahoo News the ports are not releasing containers to the drivers. “It’s been the worst month I ever had. There’s no work. They’re not releasing anything from [the port],” said Rameriz. “That’s what pays my bills.”

Rameriz also said many of the truckers are waiting three hours or longer to enter the port to pick up a container. The drivers are at the “mercy of longshoremen who operate on their own schedule,” Rameriz said.

“There’s a lot of us that are willing to work,” Rameriz added before noting he does not know “anybody that is working 24/7.”

Biden signed an executive order forcing unions to keep a few ports operational 24 hours a day, yet Rameriz said that order has not panned out the way the administration promised it would.

“If there was work, we [would] be working 24/7,” he explained. “Please send the National Guard because that will be a big solution.”

Alfred and Rameriz are not the only ones who think unions are primarily to blame for the port backlogs. Nfiindustries.com reported in July the International Longshore and Warehouse Union (ILWU) will conclude combative negotiations with the PMA in 2022. Apparently a sticking point in the negotiations is the amount of automation that should be allowed on the ports. Over regulation is also an issue:

The primary reason is that cargo handling costs on the West Coast are going up owing to regulation, and as the port range continues to lose market share to Canada and the US East and Gulf coasts. Automation, although expensive to implement, is an option terminals need in order to address rising costs.

On top of that, there is the estimated $4 billion marine terminal operators will have to spend to install zero carbon cargo handling equipment at LA–Long Beach terminals in compliance with the 2030 Clean Air Action Plan.

Meanwhile, prices for goods have increased and shelves have become bare. The supply chain crisis is expected to go into 2022 to 2023 with inflation curbing around the same time.

Why Supply Chain Disruptions Will Persist

Worst News Yet? Allegedly Intercepted Video From CCP
Saying All Americans Who ‘Took The Vax Are Dead’
Released By VA GOP House Candidate Jarome Bell
We Are Trying To Validate The Translation – Video