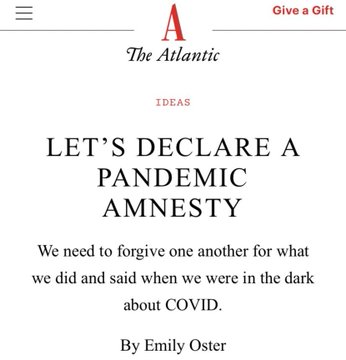 Now that the truth is out about covid, those smug and self-righteous pushers of vaccines that did not vaccinate and masks that didn’t work are demanding we just forget about the whole thing.

Emily Oster of The Atlantic wants to declare Pandemic Amnesty, which would forgive her and the rest of the Faucists who cheered the use of the power of the state to shut down the economy and force people to take shots or lose their jobs.

She wrote, “Given the amount of uncertainty, almost every position was taken on every topic. And on every topic, someone was eventually proved right, and someone else was proved wrong. In some instances, the right people were right for the wrong reasons. In other instances, they had a prescient understanding of the available information.

“The people who got it right, for whatever reason, may want to gloat. Those who got it wrong, for whatever reason, may feel defensive and retrench into a position that doesn’t accord with the facts. All of this gloating and defensiveness continues to gobble up a lot of social energy and to drive the culture wars, especially on the internet. These discussions are heated, unpleasant and, ultimately, unproductive. In the face of so much uncertainty, getting something right had a hefty element of luck. And, similarly, getting something wrong wasn’t a moral failing. Treating pandemic choices as a scorecard on which some people racked up more points than others is preventing us from moving forward.”

Every one of those mocking chimps on late-night TV mocked the hell out of those who dared question authority.

People lost their jobs over this. They jailed a man for surfing when no one else was around. People died alone because the federal government banned hospital visits.

Covid panic was used to stop Trump’s re-election. Democrats used covid as an excuse to flood the ballot box with mailed-in votes of a dubious nature.

Response on Twitter to Oster’s demand of amnesty was awesome, which in itself is awesome in that Twitter was part of the government’s enforcers to silence those who questioned authority.

Janice Dean tweeted, “Oh no, @ProfEmilyOster. Many of us won’t ever forgive or forget. Especially when it comes to the seniors who died in nursing homes after leaders flooded their residences with covid patients and never told us or protected them. They knew better. We deserve justice first.”

And she tweeted, “Thanks for mentioning the thousands of dead nursing home seniors after several governors decided to flood their nursing homes with covid infected patients. Oh wait. You didn’t.”

Other tweets are here.

“Please bro, I know we fired people from their jobs and exiled them from society bro, we didn’t know bro, I know we arrested old women for feeding pigeons and trampled people with horses and raided their homes but we were misinformed bro, we were only following orders bro.”

“I lost my job over this lie.”

“Me too. After keeping the bastards going throughout lockdowns, they moved the business location and continued to break the rules that they expected me to follow. Not sure I want to work and pay tax again, only for it to be misappropriated and misused, again, by Cretins.”

“I liked the verbal and physical assaults at the supermarkets.”

Elon Musk tweeted, “The amount of times I was asked to wear a masked or yelled at to put my mask above my nose during a flight…”

This response from someone else was pure gold, “Forgiveness is the right approach. I mean, genuine contrition on the part of those who were wrong would be a great start.“

“The best part is the entire time they were screaming at us about how we’re misinformed while using social media to restrict what we could say.”

“Maybe we can all dig up our dead relatives so we can have a proper funeral for them now.”

“Took us almost two years to have a family get together for my dad and he died in October 2020. Meanwhile I got to watch my PM fly all over the planet and party it up. That’s fuckin’ unforgivable.”

“Would of been nice to hold my newborn child while my wife was undergoing lifesaving surgery.”

“If I spoke my honest opinions about these tyrants, even Elon would ban me.”

That one made me laugh.

Not only did Oster refuse to apologize, she refused to say it won’t happen again.

She ended her piece, “The standard saying is that those who forget history are doomed to repeat it. But dwelling on the mistakes of history can lead to a repetitive doom loop as well. Let’s acknowledge that we made complicated choices in the face of deep uncertainty, and then try to work together to build back and move forward.”

They did not make complicated choices. They acted like experts on something they knew little about. Their string of mistakes began by sending covid patients to nursing homes which killed 15,000 grannies in New York alone. It continued with shutting down the economy and rejecting with laughter the use of HCQ simply because it may have made Trump look good. They called on withholding treatment for the unvaccinated. They revealed how wickedly ignorant and authoritarian they are.

If you want to change the world, then stop tolerating the intolerable. Resist, complain, detach, scream, fight, withdraw — or simply refuse to participate. Put evil people on the defensive and demand THEY explain why THEY are such horrible people. Doing all this may or may not change the world. But it will definitely change YOUR world.

Democrats BEG for covid forgiveness after DESTROYING the lives of millions

Every single headline here is from the Atlantic …