Or so it seems from a new survey placing those three digits above looks, ambition, courage, and sense of humor.

It turns out credit scores are statistical shorthand for a whole lot more than the likelihood you’ll repay a loan, according to a number of consumer surveys and academic studies. One study, released two years ago, looked at consumer credit data over 15 years and found that the higher the year-end credit score, the likelier the person was to form a romantic relationship over the next year.

Now comes a survey from Discover Financial Services and Match Media Group, parent of Tinder and other dating sites, that shows just how appealing a good credit score can be. Financial responsibility was ranked as a very or extremely important quality in a potential mate by 69 percent of the 2,000 online daters surveyed. That placed it ahead of sense of humor (67 percent), attractiveness (51 percent), ambition (50 percent), courage (42 percent), and modesty (39 percent). A good credit score was associated with being responsible, trustworthy, and smart. 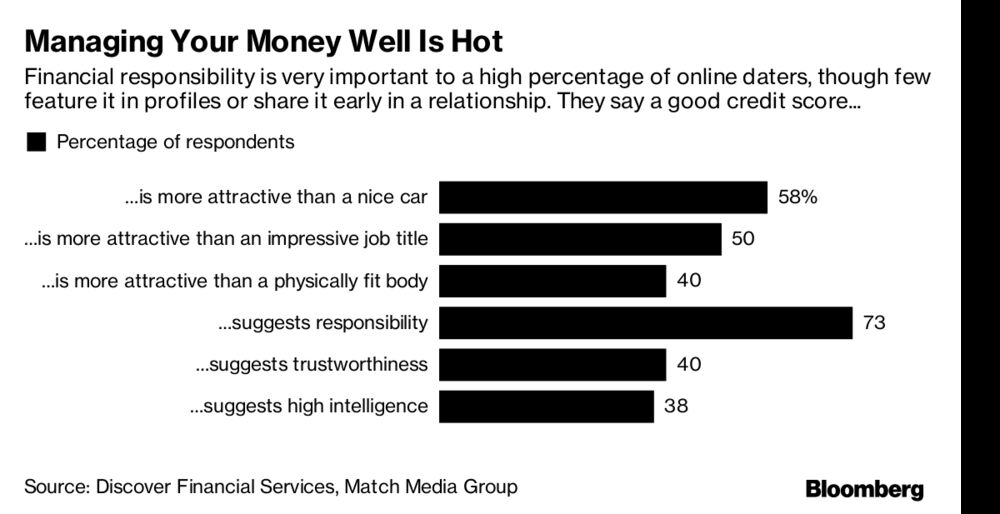 Those dating-app pictures of people in cool cars or cute gym outfits? Nah, gimme a scorching 810. A good credit score is more appealing than a nice car, said 58 percent of those surveyed. More people might swipe right if daters put up a screenshot of that
red-hot percentage.

“If you’ve got a pretty good credit score, you probably have other good personality traits,” said biological anthropologist Helen Fisher, Match.com’s chief scientific adviser and a senior research fellow at the Kinsey Institute. “You’re not only managing your money, you’re managing your family, your friends. You’re kind of a managing person. It says a lot more about you than a fancy car.” She even called it “an honest indicator of who you really are.”

She even called it a “Darwinian mechanism for measuring your reproductive ability.” (!)

There is something to this. What do people want in a mate? Many want someone who is responsible, dependable, willing to commit, and able to maintain a relationship. What does it take to get a good credit score? Mostly a long history of responsibility, dependability, and careful maintenance of accounts. Both sexes in the survey valued financial responsibility highly—77 percent of females and 61 percent of men.

Beth Rahn, a vice president for a private equity firm in Chicago and a user of online dating sites, is one of the 77 percent. Rahn, 30, thinks asking directly about the credit score on a first date would be a “quick way to scare someone off.” And if a date bragged about an 810 out of the blue, it would be a turnoff. But if the two of them were commiserating about loans or rates, say, and the 810 came up that way, she said, “my immediate reaction would be that they are responsible, on top of their expenses, they’ve been able to effectively manage debt in the past, whether it’s student loan debt, credit card debt or a mortgage.”

Dating someone whose score is similar to yours when you meet increases the odds the relationship will succeed, a 2015 paper, Credit Scores and Committed Relationships (PDF), found. When you meet, because married couples’ credit scores tend to converge over time.

The authors analyzed 15 years of data from the Federal Reserve Bank of New York Consumer Credit Panel/Equifax, which covers millions of consumers and provided detailed credit record information. People “with higher credit scores are more likely to form committed relationships relative to other observably similar individuals” and more likely to maintain relationships, the authors found. They identified committed relationships by creating an algorithm to spot the formation and dissolution of marriages and long-term cohabitation. 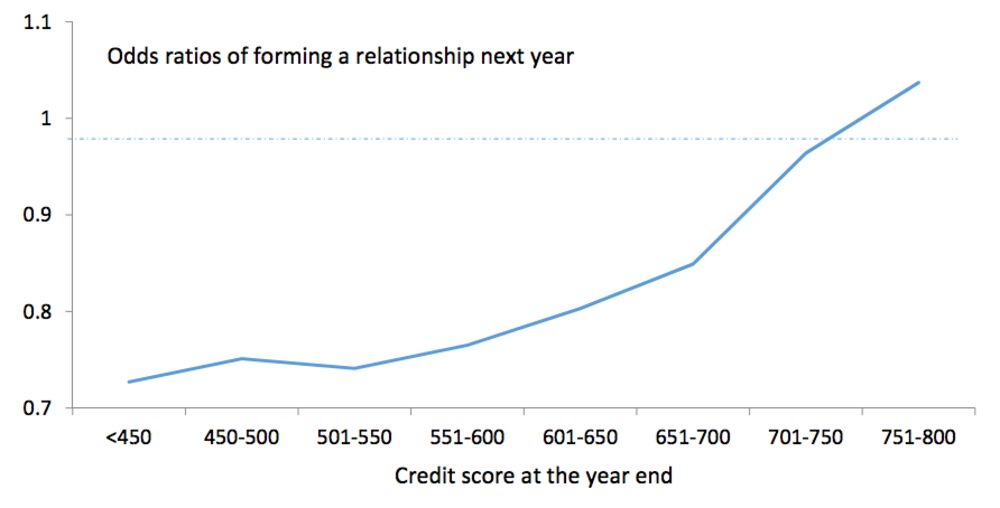 The bigger the mismatch in scores when daters meet, the higher the likelihood the relationship won’t work out in the long run, the data showed. For example, between two couples, one with scores of 700 each and another with scores of 660 and 730, the second couple would have

But this is no statistics lesson. This is lo-o-o-ove. Just look: 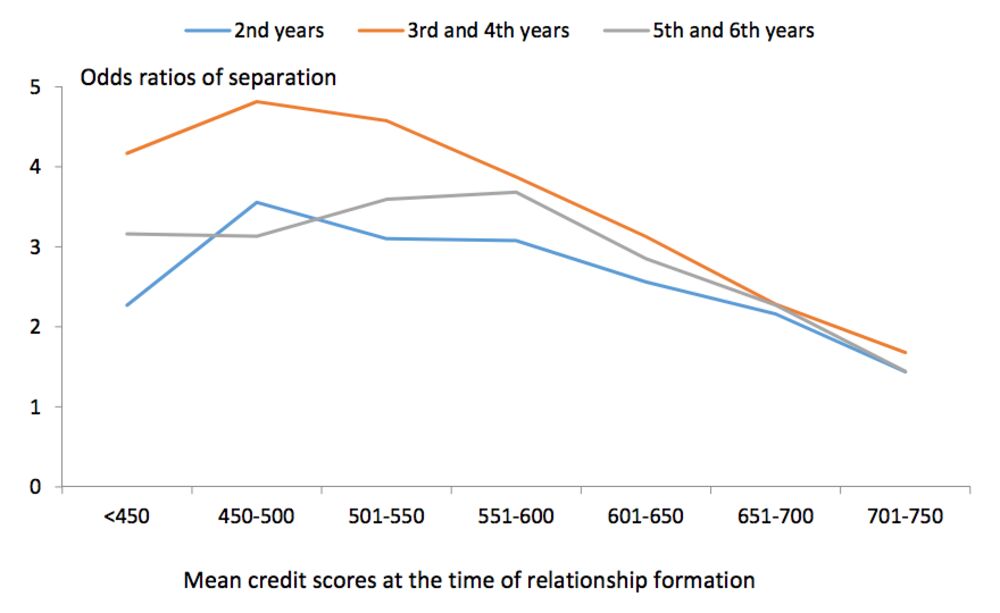 Mind you, it’s also true that people with excellent credit scores are likelier than those with bad scores to be frequent exercisers and bigger fans of Charlie Rose than of Jimmy Kimmel, and to prefer hockey to soccer and dogs to cats. And Taylor Swift to Kanye West. That’s according to a 2016 WalletHub survey of 1,000 consumers.

Even if we accept that the score is a proxy for inclinations and tastes, guiding us toward people in the same socioeconomic circles with similar financial behaviors, can that 810 really release a rush of dopamine?

Perhaps not, Fisher allowed, noting that dopamine is the brain chemical associated with feelings of intense romantic love. But there is a different brain system in which “it could really stimulate some of the molecular structure for attachment,” she said. That system is tied to mating and reproduction and involves feelings of deep attachment. A credit score could trigger feelings about reliability and responsibility and trustworthiness, which could trigger that attachment system, she said.

At any rate (and that rate will depend on your credit score), daters may want to trust but verify. A survey done earlier this year for student loan company SoFi found that nearly 24 percent of respondents said a date or partner had lied to them about how much debt they carried. The 2,000 millennial daters surveyed said debt was the second second-biggest potential deal-breaker, behind workaholism. That may explain why 40 percent said they’d rather talk about their socially transmitted diseases than their debt.

In the Discover/Match survey, only 7 percent of online daters said they would provide information on their credit score, debt level, income, and spending habits before meeting a date IRL. For most people, the soonest they’d feel comfortable sharing financial details is sometime in the first six months of a relationship.

“It can be difficult enough to find someone you’re compatible with, so to suddenly go from this emotional connection to this practical part of your brain, it can seem incredibly clinical, and you don’t want that,” said Adam Scott, a financial planner at Westside Investment Management in Santa Monica, California. “But if you don’t pay attention in the beginning, you aren’t building your relationship on a sound footing, and it will come back to haunt you.” Being on the same basic page financially will “ultimately be one of the predictors of the success of the relationship,” he said. “It will be one of the defining things, maybe even more than sex.”

People may be hesitant to reveal their credit scores now, but “the data suggest that it might become the norm over time,” said Kate Manfred, vice president of brand communications and consumer insights for Discover. She envisions a day when people “do dueling phones and you pull up your scores right there, in under 60 seconds. You pull out your phone and say, ‘Look, here’s my credit score, what’s yours? Let’s swap.’ ”

Or, as Shakespeare wrote:
My mistress’ eyes are nothing like the sun
Her sweetest gift, a lambent 801.