2017 was a year of remarkable tranquility in financial markets, but 2018 has been quite the opposite. After going an entire year without a 2% weekly move, the S&P 500 (SPY) has recorded eight such weekly moves through the first twelve weeks of 2018. This week, volatility was reignited by a flurry of headlines centering around US trade policy, a political “data breach” at Facebook (NASDAQ:FB), a “hawkish hike” by the Federal Reserve, and a $1.3 trillion spending bill.

This week, the S&P 500 (SPY) dipped nearly 6%, which was the worst week for US stocks in more than two years. Investors are increasingly anxious that rising protectionism threatens to upend the best period of global economic growth in a decade. Others, however, remain confident that the Trump administration’s hard-line stance on trade is a negotiating tactic that will inevitably result in lower overall trade barriers. Real estate sectors are relatively immune from these effects. REITs (VNQ and IYR) and home builders (XHB and ITB) outperformed this week, dropping 5% and 3%, respectively. Yield-sensitive equity sectors, including REITs and home builders, have outperformed over the past month as interest rates and inflation expectations retreated. 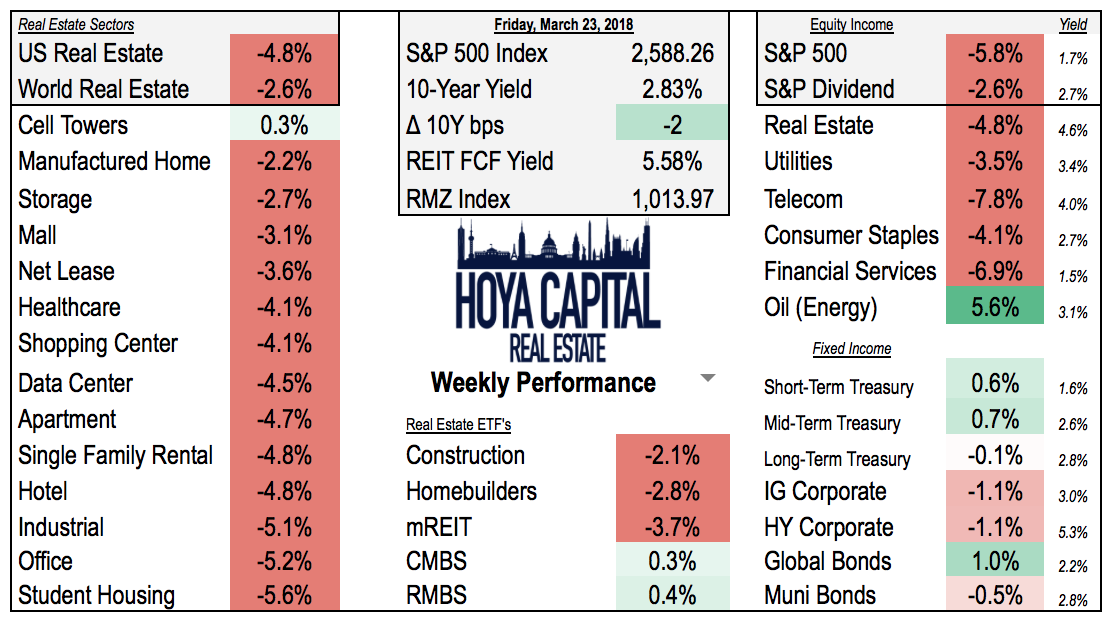 The 10-Year Yield ended the week 2bps lower at 2.83% after climbing to 2.90% following the Federal Reserve’s “hawkish hike.” The Fed hiked short-term rates by 25bps, as expected, but compared to the last meeting, more Fed officials now expect four rate hikes in 2018. Since inflation remains relatively subdued, investors fear that a rate-hike plan this aggressive may be unnecessarily restrictive and slow the US economy, indicated by the flattening yield curve.

Across other areas of the real estate sector, mortgage REITs (REM) declined by nearly 4% while international real estate (VNQI) fell roughly 3%. Within the Equity Income categories, we note the performance and current income yield of the Utilities, Telecom, Consumer Staples, Financials, and Energy. Within the Fixed Income categories, we look at Short-, Medium-, and Long-Term Treasuries, as well as Investment Grade and High Yield Corporates, Municipal Bonds, and Global Bonds. 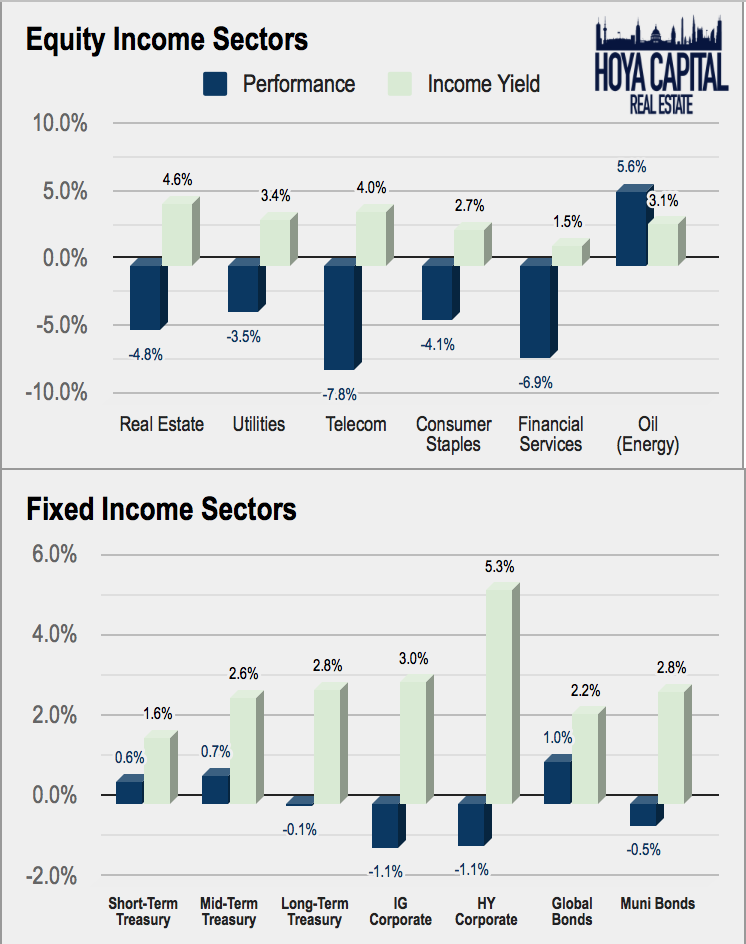 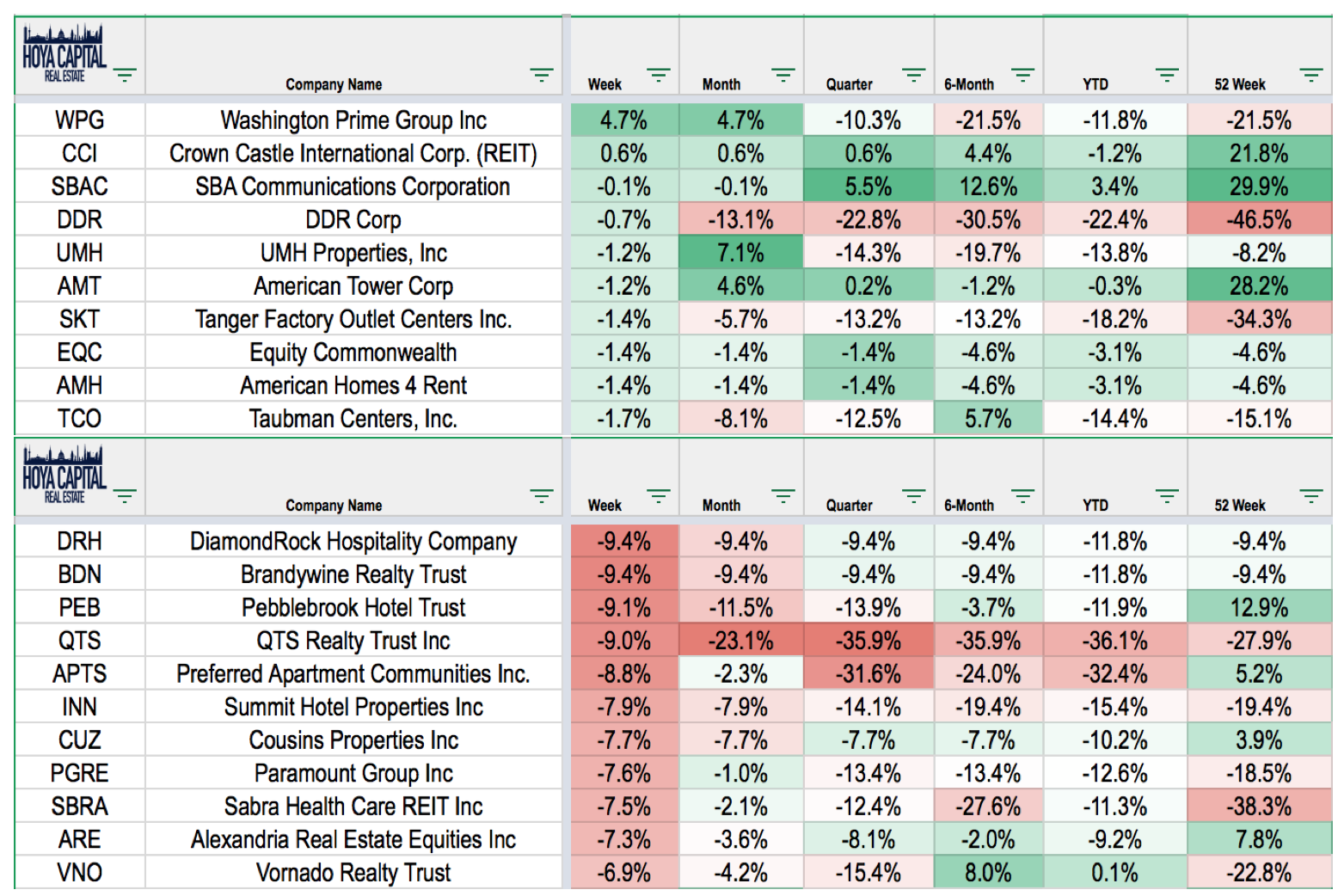 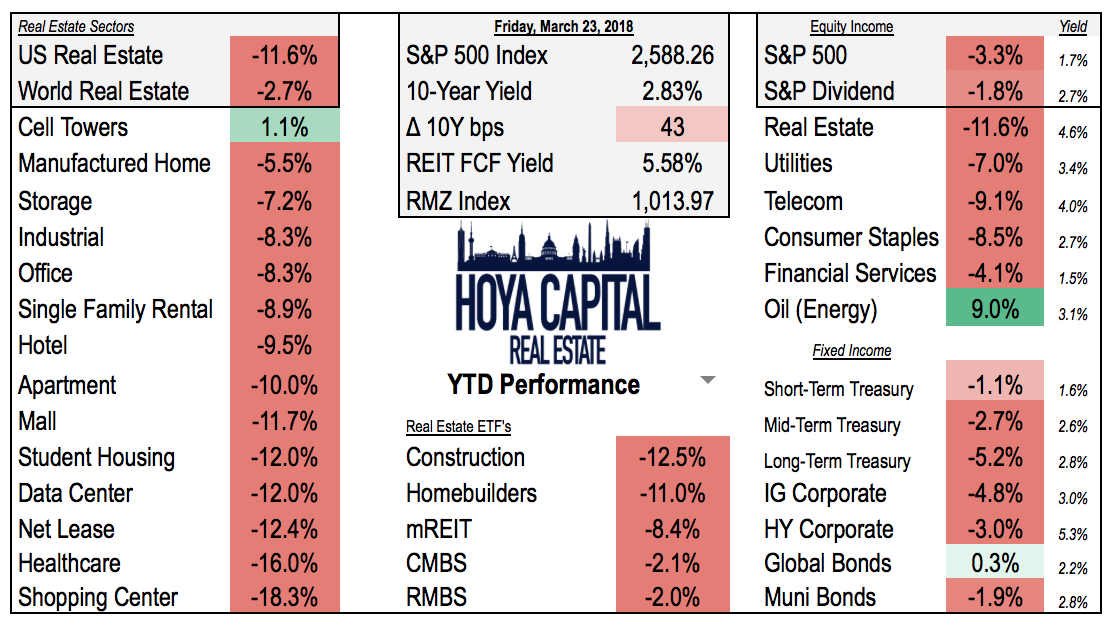 REITs ended 2017 with a total return of roughly 5%, lower than the 20-year average annual return of 12%. Going forward, absent continued cap-rate compression, it is reasonable to expect REITs to return an average of 6-8% per year with an annual standard deviation averaging 5-15%. This risk/return profile is roughly in line with large-cap US equities. 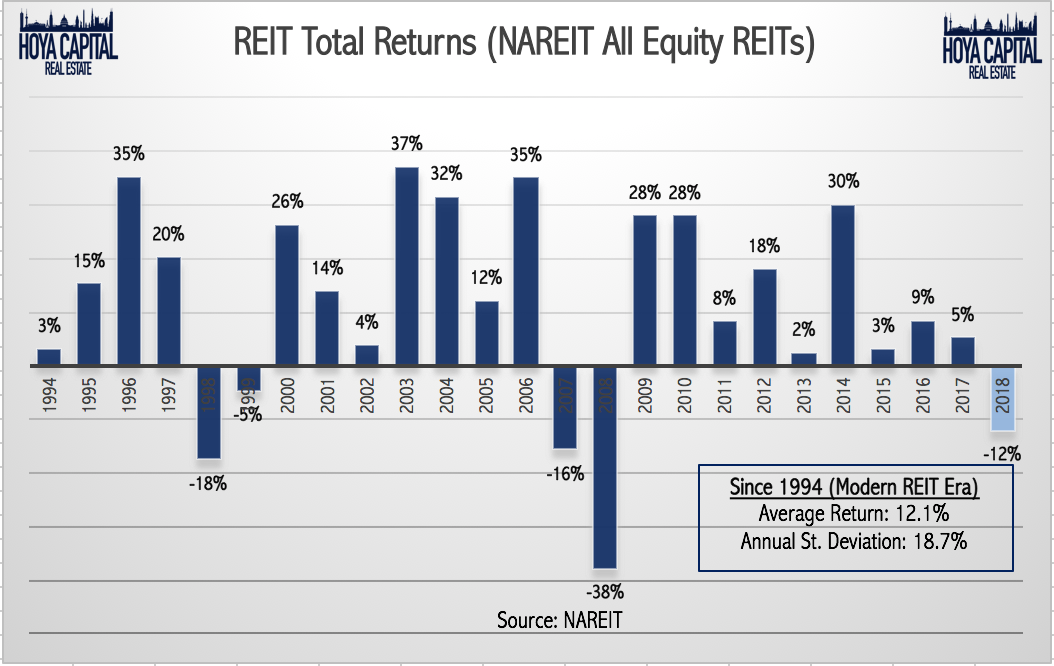 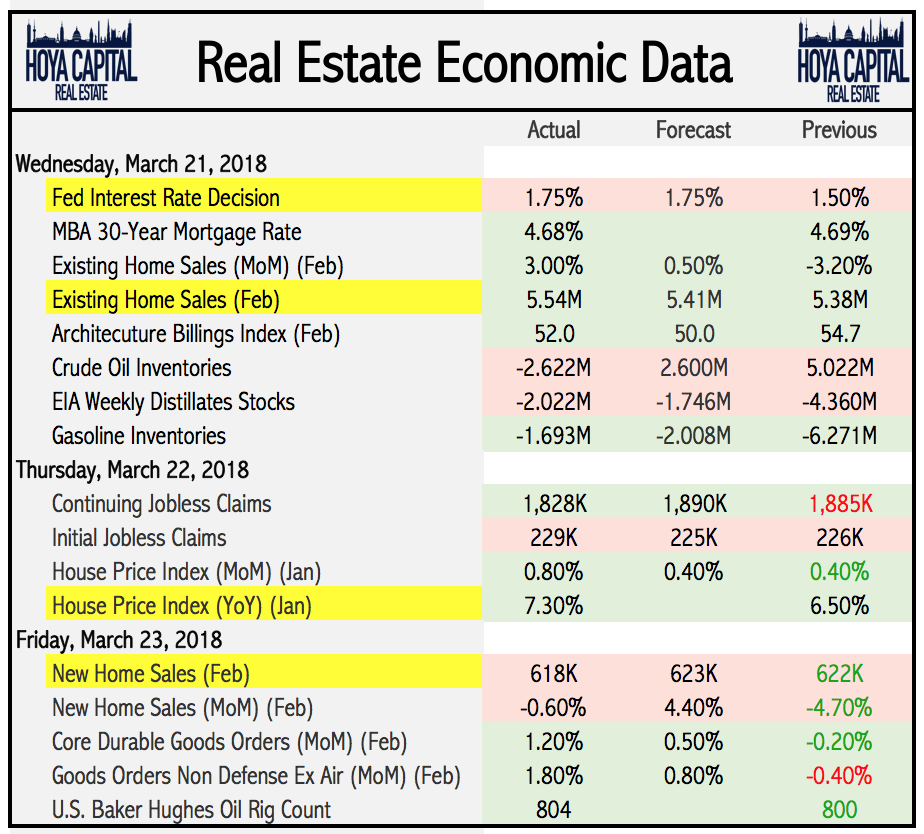 New and Existing Home Sales Continue to Be Soft

Last week, we analyzed February housing starts data, which indicated that housing construction activity has slowed in recent quarters, dragged down by a sustained pullback in multifamily building. Single-family construction remains relatively solid, but rising mortgage rates and changes to the tax code threaten to stall the plodding housing recovery. Total housing starts have grown just 2.0% over the past twelve months, the slowest rate of growth since 2011. 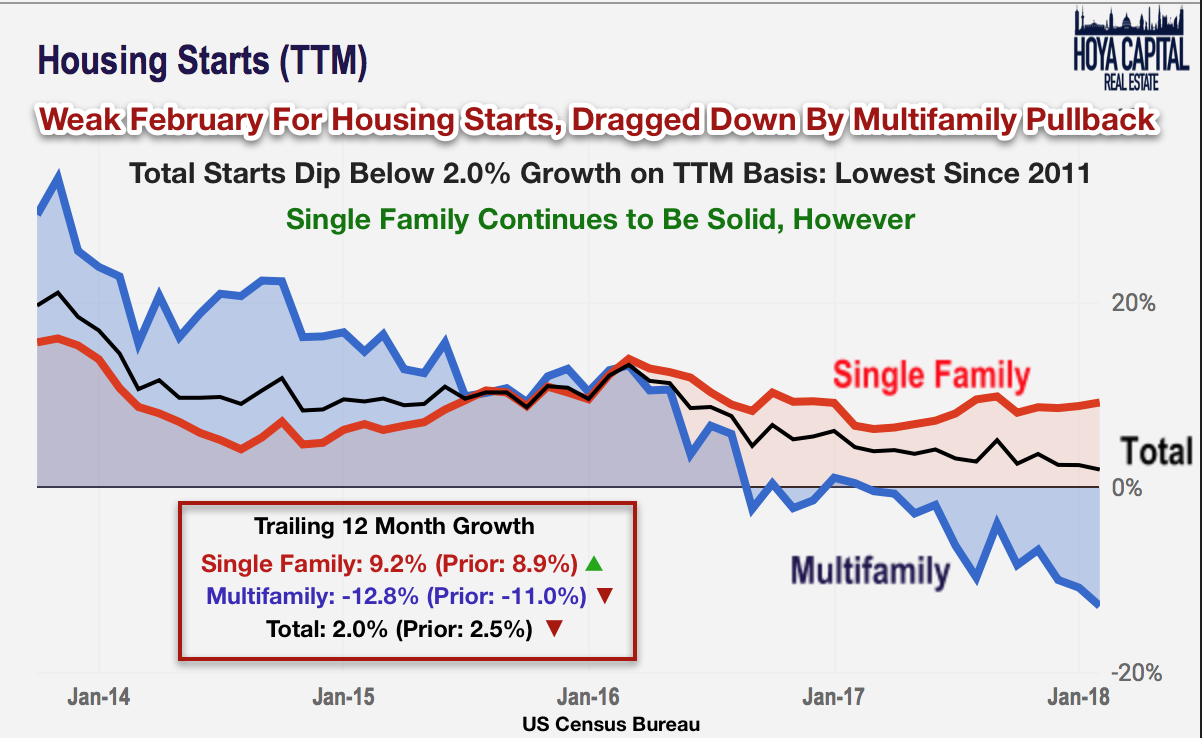 This week, new and existing home sales data was released. Both new and existing home sales were strong in early 2017 but faded into year-end, likely due to rising mortgage rates, unaffordability issues, and continued tight supply levels. Existing homes were sold at a 5.54m seasonally adjusted annualized rate in February, slightly missing expectations. Existing sales have risen just 1% over the past year, the weakest rate of growth since early 2015.

New homes were sold at a 618k rate, which was roughly in line with expectations after upward revisions to past months. New home sales, which are primarily comprised of single-family homes, have been the relative bright spot, growing 7.5% on a TTM basis. This rate of growth, however, is also the second slowest since early 2015. 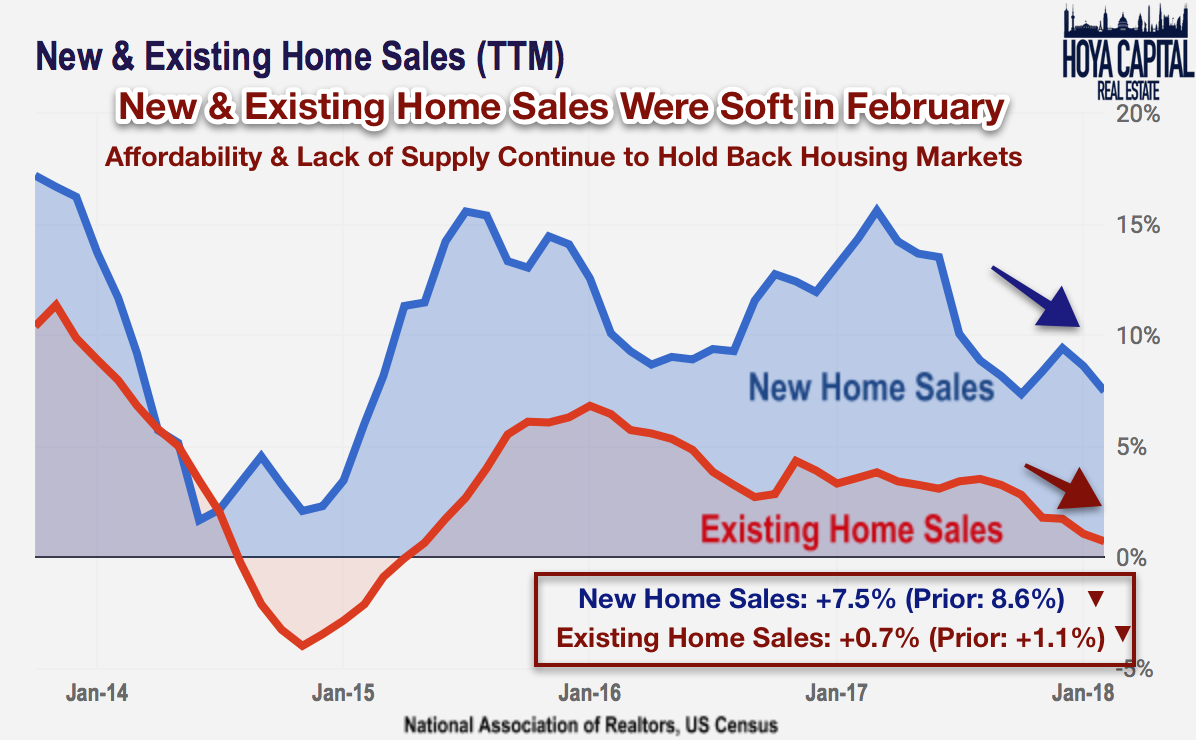 At roughly 600k per year, the rate of new home sales remains well below pre-recession levels and remains low by historical standards. The period between 1970 and 2000 saw an average of 650k home sales per year while the average population during that time was 30-40% below current levels. The rate of existing home sales, however, remains relatively healthy. At around 7% per year, the turnover rate of existing homes is roughly in line with pre-2000 levels. A number of factors have contributed to the “wide bottom” in new single-family housing construction: the lingering effects of overbuilding in the run-up to the housing bubble, a generational shift to renting, restrictive zoning restrictions, and lower investment returns from home building. 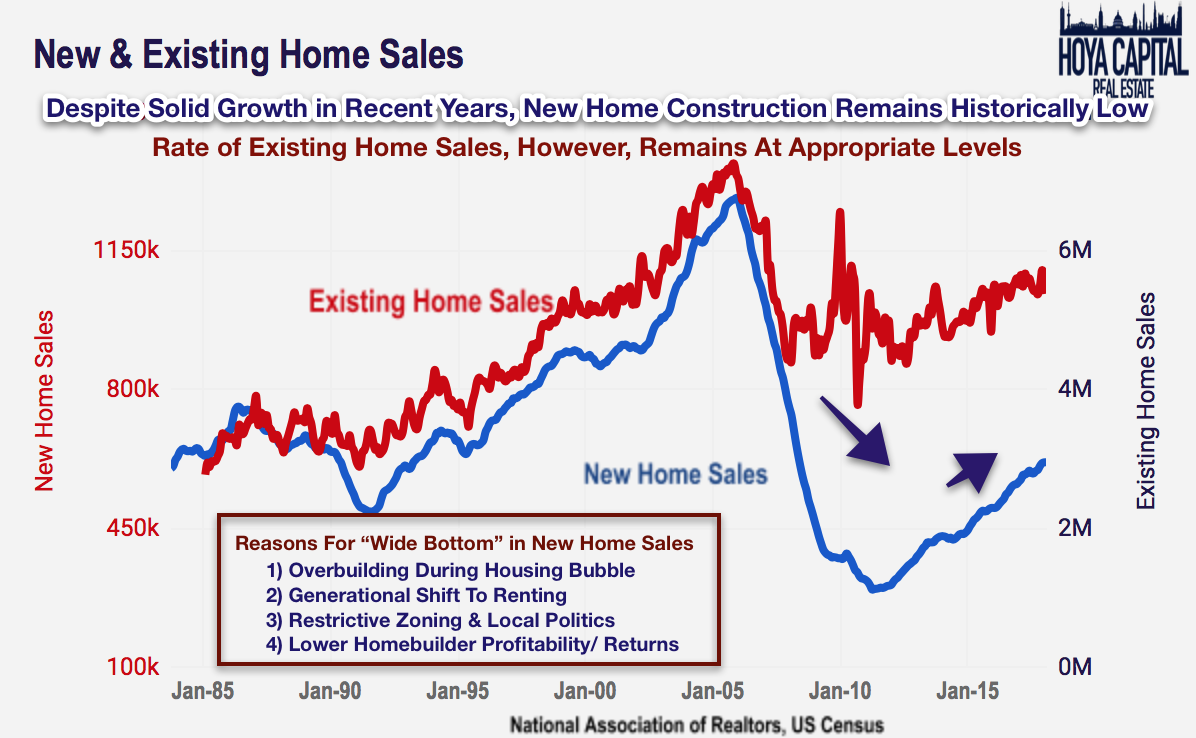 Existing home inventory remains near historically low levels, primarily a result of this “wide bottom” in new single-family housing construction. Existing housing supply was just 3.4 months in February, down from 3.8 months in February 2017. Other effects are at play, too, including the increased institutional presence in the single-family rental markets and the rising rate of home ownership among the older demographics. First-time home buyers made up 29% of total existing home sales, down from the 32% in February 2017. The rate of first-time home buyers remains stubbornly below the pre-bubble level of 40-45% and the bubble-peak of 52%. We have yet to see the younger demographics enter the home ownership markets in any significant numbers. 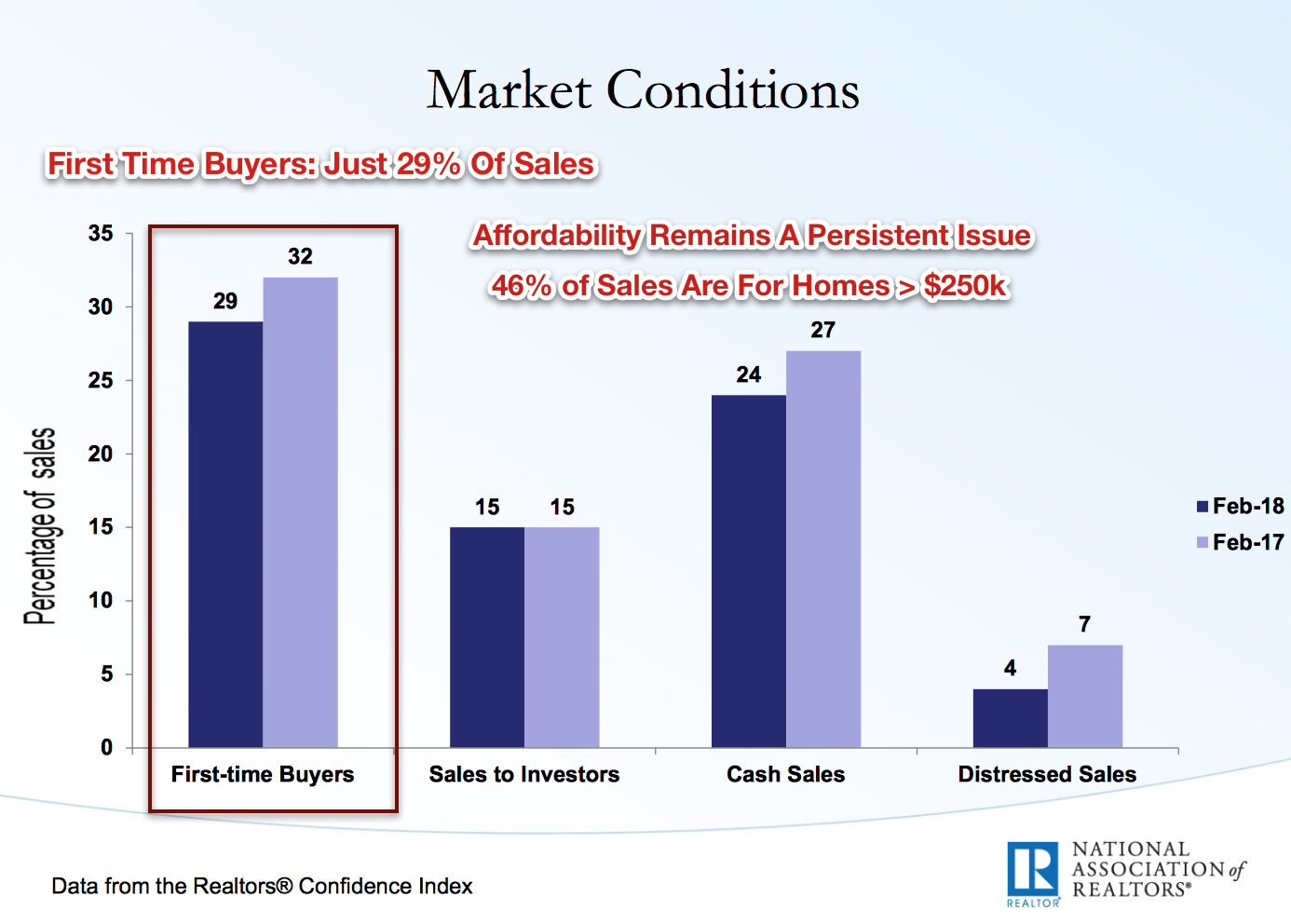 Last week, we published our Real Estate Earnings Review for 4Q17. Earnings season concluded last week in the real estate sector. Overall, 4Q17 results were slightly better than expected (80% beat or met estimates), but REITs raised caution heading into 2018. As supply growth has intensified, fundamentals continue to moderate across the real estate sector as rental markets approach supply/demand equilibrium after nearly a decade of above-trend rent growth. Same-store NOI grew 2.6% in 2017, the slowest rate of growth since 2011. Occupancy levels remain near record highs, however, as real estate demand growth continues to be robust. 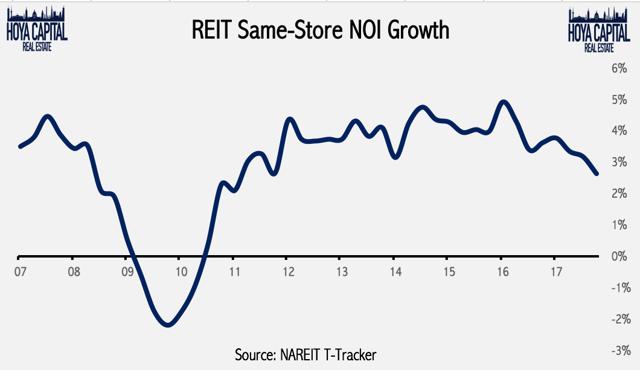 Amid rising trade and political tensions, US equities dipped nearly 6% this week, the worst weekly performance in two years. REITs fell 5% while home builders declined 3%. A flurry of headlines reignited volatility this week including a Fed rate hike, retaliatory tariffs from China, a major data breach at Facebook, and a $1.3 trillion spending bill. Investors are increasingly anxious that protectionism threatens to upend the best period of global economic growth in a decade. Real estate sectors are relatively immune from these negative effects.

Yield-sensitive equity sectors, including REITs and home builders, have outperformed during the past month as interest rates and inflation expectations have retreated. The effects of tax reform and rising mortgage rates are beginning to impact housing markets. Existing home sales are higher by just 1% as first-time buyers remain on the sidelines.

Last week, we published our quarterly update on the cell tower sector: Cell Tower REITs Shrug Off SpaceX Launch. Cell towers were the best performing REIT sector in 2017. After strong 4Q17 earnings results, cell towers remain the lone REIT sector in positive territory so far in 2018. The enormous spectacle of the SpaceX launch and the grand ambitions of Elon Musk to launch a competing satellite-based internet service temporarily jolted investor confidence in the sector. Despite potential competition from small-cells and satellite, macro towers continue to be the most economical way to provide comprehensive coverage. The risk of technological obsolescence is often overstated. Positive catalysts are on the horizon for 2018.

We also published our quarterly update on the industrial sector: Industrial REITs: Only A Trade War Can Spoil The Good Times. Over the past five years, industrial REITs have emerged as the hottest real estate sector. Booming global trade and the growth of e-commerce have boosted demand for warehouse distribution space. While supply growth has picked up in recent years, markets remain tight. Occupancy is near record highs, rent growth is relentless, and demand indicators suggest that there’s further room to run. Fears of a “trade war” have escalated after the US enacted tariffs on steel and aluminum imports. Uncertainty over trade policy could disrupt supply chains and weaken industrial REIT fundamentals.

So far, we have updated up REIT Rankings on the Industrial, Single Family Rental, Cell Tower, Apartment, Net Lease, Data Center, Mall, Manufactured Housing, Student Housing, and Storage sectors. We will continue our updates over the coming weeks.

Please add your comments if you have additional insight or opinions. We encourage readers to follow our Seeking Alpha page (click “Follow” at the top) to continue to stay up to date on our REIT rankings, weekly recaps, and analysis on the real estate and income sectors.