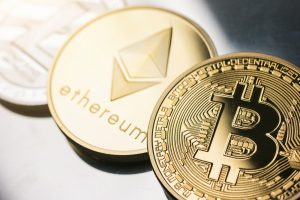 Upon first glance, Bitcoin is a terrible candidate for such a role. It’s volatile, hard to understand, and difficult to access given how it exists outside of the traditional banking system.

So why would anyone consider it desirable during a crisis? Because it exists outside of the traditional banking system.

One of the first parabolic up-moves for the cryptocoin began with a banking crisis in Cypress. Back in 2013, while still reeling from the aftermath of the financial crisis, the tiny Mediterranean country found its banking system teetering, and reached out to the bigger European powers for help.

But instead of offering them a bailout, the EU came back with something more along the lines of a bail-in, as it demanded that Cypriot banks confiscate a portion of their customers deposits to shore up their balance sheets. To add insult to injury, they also imposed capital controls that prevented people from moving their money to a safer jurisdiction.

As you can see on the chart below, a decentralized form of money like Bitcoin, despite its drawbacks, can suddenly look very appealing when the centralized system starts to falter.

Crypto skeptics who tell us that digital money should not be worth anything often forget that fiat money like the Euro is also in of itself worthless. It’s only valuable when someone else is willing to trade a good or service for it. But you can’t get anything in exchange for money that the government is taking or locking up, which is why the Cypriot crisis brought a lot of attention to the then relatively unknown Bitcoin.

Government officials don’t like cryptocurrency because they transfer the sovereignty of money from their control to a decentralized consensus mechanism, a transfer that they view as a downgrade in the quality of money. If our existing system of money and banking was always stable, they would have a point.

But every time there is a crisis, it reminds the public that the folks in charge are not as smart as they think they are. When those same leaders respond to the crisis with draconian capital controls (or selective bailouts for their once and future employers on Wall Street) they remind the public that they aren’t as fair as they think they are, either. Bitcoin might be volatile and hard to understand, but it’s always fair, because math does not discriminate, nor does it change the rules when people start to panic.

So why bring this issue up now? Because there is financial trouble brewing in certain corners of the global financial system, and if things continue to deteriorate, this year might serve as an important test of the crypto economy.

Iran and Venezuela are in the midst of the kinds of hyper inflationary currency death spirals that bring societies to their knees. In Argentina, the peso has fallen to an all-time low against the dollar as inflation and interest rates spike. Turkey is having problems of its own, and China continues to do everything it can to prevent its citizens from liberating their own money.

Some of this weakness was to be expected, because the Federal Reserve is now removing the liquidity it has provided for the past decade. But there’s a bigger issue in play, as the perennial economic mismanagement of developing nations is now rubbing up against the increasing political instability (Brexit, Trump, Catalonia, Five Star) of developed ones.

In the old days, the two best candidates for flight to quality assets were gold and the Dollar. But the former is hard to get a hold of and even harder to store, and the latter is no panacea either. When the Argentinian government last devalued its currency back in 2001, it first forced all local banks to convert the dollar-denominated accounts of its citizens to the Peso. Even the citizens that were smart enough not to trust the local currency had their savings destroyed, learning the valuable lesson that dollars in the bank is not the same as dollars under the mattress.

One of the most important takeaways from past financial crisis is that when the stuff hits the fan, banks are nothing more than a policy tool for the government.

So can a cryptocurrency like Bitcoin be considered a flight to quality asset for certain countries? Given everything we’ve learned in the past 20 years, a better question to ask might be how could it not.