As the Federal Reserve kicked off its second round of quantitative easing in the aftermath of the Great Financial Crisis, hedge fund manager David Tepper predicted that nearly all assets would rise tremendously in response. “The Fed just announced: We want economic growth, and we don’t care if there’s inflation… have they ever said that before?” He then famously uttered the line “You gotta love a put”, referring to the Fed’s declared willingness to print $trillions to backstop the economy and financial markets. Nine years later we see that Tepper was right, likely even more so than he realized at the time.

The other world central banks followed the Fed’s lead. Mario Draghi of the ECB declared a similar “whatever it takes” policy and has printed nearly $3.5 trillion in just the past three years alone. The Bank of Japan has intervened so much that it now owns over 40% of its country’s entire bond market. And no central bank has printed more than the People’s Bank of China.

It has been an unprecedented force feeding of stimulus into the global system. And, contrary to what most people realize, it hasn’t diminished over the years since the Great Recession. In fact, the most recent wave from 2015-2018 has seen the highest amount of injected ‘thin-air’ money ever:

In response, equities have long since rocketed past their pre-crisis highs, bonds continued rising as interest rates stayed at historic lows, and many real estate markets are now back in bubble territory. As Tepper predicted, financial and other risk assets have shot the moon. And everyone learned to love the ‘Fed put’ and stop worrying.

But as King Louis XV and Bob Dylan both warned us, what’s coming next will change everything.

This halcyon era of ever-higher prices and consequence-free backstopping by the central banks is ending. The central banks, desperate to give themselves some slack (any slack!) to maneuver when the next recession arrives, have publicly committed to ‘tightening monetary policy’ and ‘unwinding their balance sheets’, which is wonk-speak for ‘reversing what they’ve done’ over the past decade.

Most general investors today just don’t appreciate how gargantuanly significant this is. For the past 9 years, we’ve become accustomed to a volatility-free one-way trip higher in asset prices. It’s been all-glory with no risk while the ‘Fed put’ has had our backs (along with the ‘EBC put’, the ‘BOJ’ put, the ‘PBoC put’, etc). Anybody going long, buying the (few, minor) dips along the way, has felt like a genius. That’s all over.

Based on current guidance from the central banks, “global QE” is expected to drop precipitously from here: 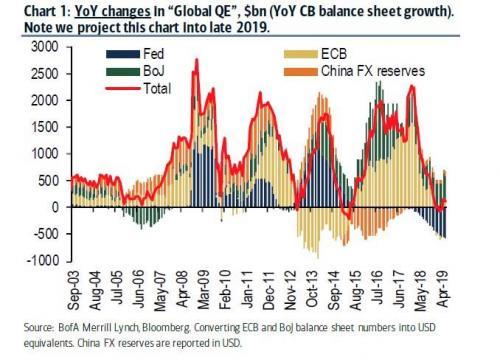 With just the relatively tiny amount of QE tapering so far, 2018 has already seen more market price volatility than any year since 2009. But we’ve seen nothing so far compared to the volatility that’s coming later this year when QE starts declining in earnest. In parallel with this tightening, global interest rates are rising after years of flat lining at all-time lows. And it’s important to note that our recent 0% (or negative) yields came at the end of a 35-year secular cycle of declining interest rates that began in the early 1980s.

Are we seeing a secular cycle turn now that rates are creeping back up? Will rising interest rates be the norm for the foreseeable future? If so, the world is woefully unprepared for it. Countries and companies are carrying unprecedented levels of debt, as are many households. Rising interest rates increases the cost of servicing that debt, leaving less behind to invest or to meet basic operating needs. 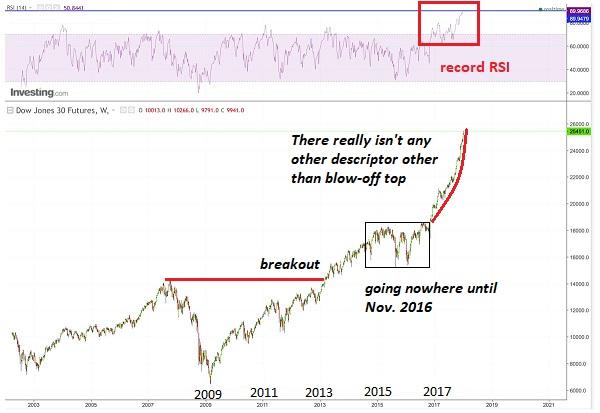 So we’re presented with a simple question: What happens when the QE that’s grossly-inflating markets stops at the same time that interest rates rise? The answer is simple, too: Prices fall.

They fall commensurate with the distortion within the system. Which is unprecendented at this stage.

So the situation is dire. But it gets worse. Our debt that’s getting more expensive to service? Well, not only are we (in the US) adding to it at a faster rate with our newly-declared horizon of $1+ trillion annual deficits, but we’re increasingly antagonizing the largest buyers of our debt.

This is most notable with China (the #1 Treasury buyer), whom we’ve dragged into a trade war and just announced $50 billion in tariffs against. But Japan (the #2 buyer) is also materially reducing its Treasury purchases. And not to be outdone, Russia recently dumped half of its Treasury holdings, $47 billion worth, in a single fell swoop. Should this trend lead, understandably, to lower demand for US Treasures in the future, that only will put further pressure on interest rates to move higher.

And this is all happening at a time when the stability of the rest of the world is fast deteriorating. Developing (EM) countries are getting destroyed as central bank liquidity flows slow and reverse — as higher interest rates strengthen the USD against their home currencies, their debts (mostly denominated in USD) become more costly while their revenues (denominated in local currency) lose purchasing power. Fault lines are fracturing across Europe as protectionist, populist candidates are threatening the long-standing EU power structure. Italy’s economy is struggling to remain afloat and could take the entire European banking system down with it. The new tit-for-tat tariffs with the US aren’t helping matters. And China, trade war aside, is seeing its fabled economic momentum slow to multi-decade lows.

All players on the chessboard are weakening.

The Timing Is Becoming Clear

Yes, the financial markets are currently still near all-time highs (or at the high, in the case of the NASDAQ). And yes, expected Q2 US GDP has jumped to a blistering 4.8%. But the writing is increasingly on the wall that these rosy heights won’t last for much longer.

These next three charts from Palisade Research, combined with the above forecast of the drop-off in global QE, paint a stark picture for the rest of 2018 and beyond. The first shows that as the G-3 central banks have started their initial (and still small) efforts to withdraw QE, the Global Financial Stress Indicator is spiking worrisomely:

Next, one of the best predictors of global corporate earnings now forecasts an imminent collapse. As go earnings, so go stock prices: 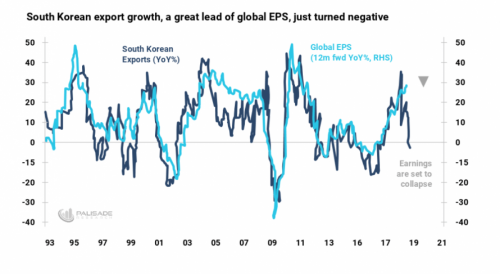 And looking at trade flows — which track the movement of ‘real stuff’ like air and shipping freights — we see clear signs that the global economy is slowing down (a trend that will be exacerbated if oil prices rise as geologist Art Berman predicts): 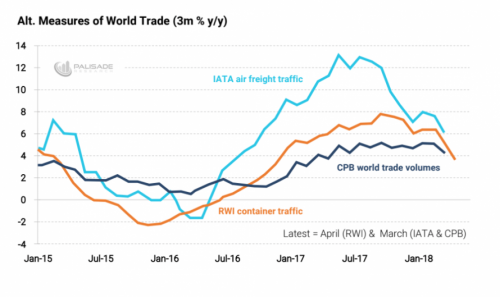 The end of QE, higher interest rates, trade wars at a time of slowing global trade, China/Europe weakening, EM carnage — it’s like both legs of the ladder you’re standing on being sawed off, as well all of the rungs underneath you.

Conclusion: a major decline in the financial markets is due for the second half of 2018/first half of 2019.

We’re lurching through the final steps of familiar territory as the status quo we’ve known for the past near-decade is ending. The mind-mindbogglingly massive central bank stimulus supporting asset prices are disappearing. Interest rates are rising. It’s hard to overemphasize how seismic these changes will be to world markets and the global economy. The coming years are going to be completely different than what society is conditioned for. Time is running short to get prepared. Because when today’s Everything Bubble bursts, the effect will be nothing short of catastrophic as 50 years of excessive debt accumulation suddenly deflates.