That’s the backdrop to understand the timing and presentation of the interview content.

As to the substance of the interview, President Trump is 100% accurate.  If the U.K. keeps the pre-existing trade pact with the EU, and essentially stays economically attached to the EU through acquiescence to the EU trade bloc, then any bilateral trade deal between the U.S. and the U.K. is essentially impossible.   Duh.

The EU doesn’t allow member nations to conduct their own trade negotiations.  So, any agreement that keeps the U.K attached to the EU economically means any trade deal with the U.K. would be a trade deal with the EU; and the EU trade positions are adverse to the ongoing economic interests of the United States.

This factual reality is the basis for President Trump telling The Sun any trade deal with the U.K. will be impossible under the current ‘Brexit’ terms that Prime Minister Theresa May has consigned herself to accept.   According to the interview President Trump warned Prime Minister May of this likelihood. Mrs. May then screwed herself and her nation’s economic interests by following the path of appeasement with the European Union.  It is not Trump’s fault for calling out the reality of the British economic position.

If President Trump speaking honestly about the economic consequence from PM May’s decision causes consternation, well, so be it.  When the Brits get done gnashing their teeth, the math remains unchanged.  Attach yourself to the EU and no bilateral trade deal with the United States is possible.  No amount of foot-stomping is going to change that.

The Brits can kick out Theresa May and do what they should have done two years ago; withdrawn from the European Union – a ‘hard Brexit’.  Or, if they like the way things are going…. just keep on keeping on.  It’s their decision.

May looks as if she knows she is screwed;
Mr. May looks like he knows his wife is screwed and he hates everything;
The President looks like Thor;
and Melania looks like a misplaced Goddess, above the fray.
Just a Great photo! 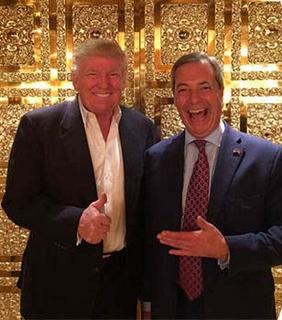