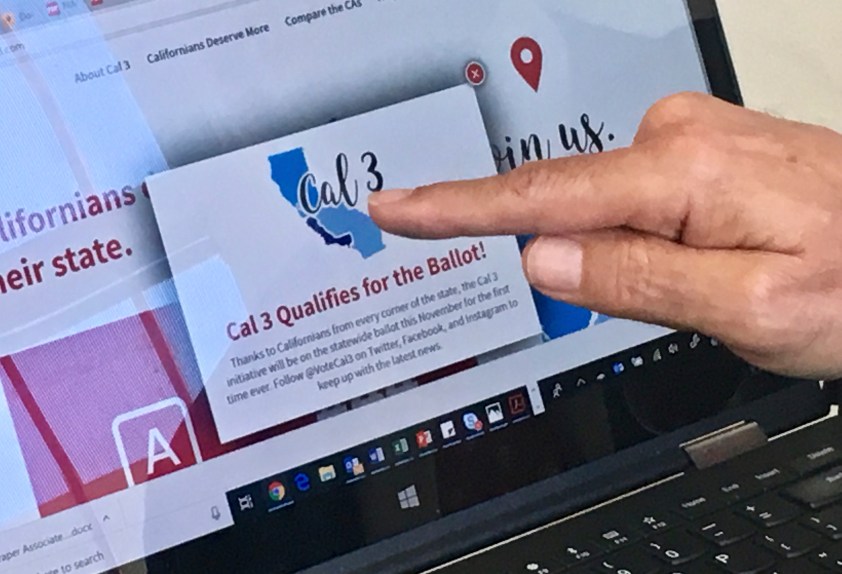 In this June 18, 2018, photo, venture capitalist Tim Draper points to a computer screen at his offices in San Mateo, showing an initiative to split California into three states qualified for the ballot. Opponents of an initiative are asking the state Supreme Court to pull the measure from the ballot. (AP Photo/Haven Daley)

Voters will decide in November on a proposition that calls for California to be split into three new and separate states.

This column isn’t the place to debate the merits of the idea. Nor will I ponder its odds at the ballot box. And I’ll leave to other pundits the vast legal, political and operational impacts of such a historic change — and that’s only if the breakup ever got all the necessary approvals after a winning vote.

We are here to talk one thing: What might these three new state housing markets look like based on historical trends. Geographically speaking, the plan creates new state borders along county lines.

Knowing the new county lineup, I filled my trusty spreadsheet with historical housing data provided by Attom Data Solutions. Looking at stats from 2000 through 2018’s first quarter, here are 10 things you should know about the housing markets within each of the new proposed states.

1. Price tags: When you shuffle the counties into three states, what does a sales-weighted median for 2018’s first-quarter selling prices for all properties look like? It’s no surprise that it would cost the most to buy in Northern California at $580,200. Next was the new coastal California at $571,900. Southern California was most affordable — remember all the cheaper inland properties are in this new state — at $426,000.

2. Best bet: Where was the best performance this century, as measured by growth in median selling prices for all properties, 2000 through this year? Well, seaside property rocks. The Pacific-hugging new California’s 181 percent gain was tops vs. Southern California at 148 percent and Northern California’s 120 percent.

3. Most pain: Split or not, don’t forget the pain of housing’s bubble bursting! What new state’s housing market would have fared the worst in the 2006-2011 downturn? Northern California’s 46 percent price drop was the largest loss and a shade ahead of Southern California’s fall of 45.6 percent and new California’s 41.4 percent tumble.

4. Top recovery: Where was the post-recession rebound the best, measured by the 2011-2018 selling price upswing? Northern California produced 108 percent in gains in seven years vs. Southern California at 84 percent and new California’s 83 percent.

7. Sales dips: Home buying is down since the turn of the century as homeowners choose to move less and ownership is less affordable. New California’s sales pace is down 19 percent since 2000; Northern California is off 10 percent; Southern California is down 4.5 percent. 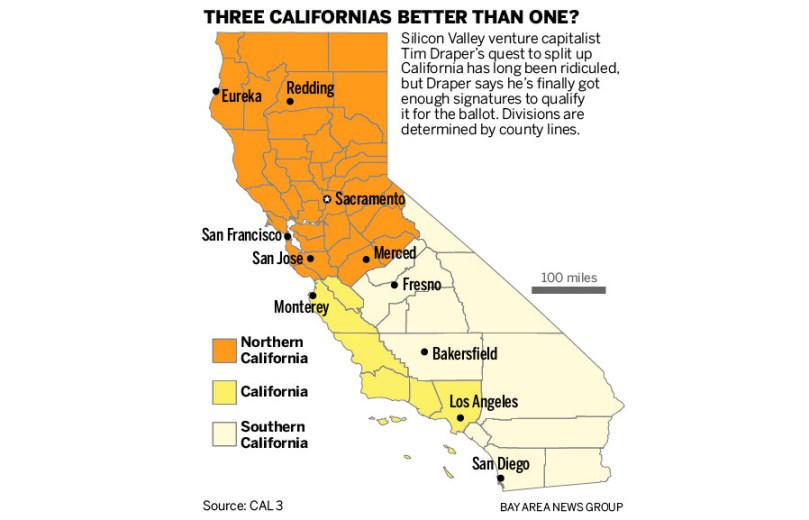 9. Price extremes: Where’s the budget-busting housing in the proposed new states  … and where are the bargains? Southern California’s priciest single-family homes are in Orange County at an average value of $871,635 vs. the cheapest county, Kings, at $202,699. New California’s priciest is Santa Barbara County at $804,942 vs. San Benito County’s $541,434 low. Of course, Northern California has an insane gap: the highest prices are in San Mateo County at $1.61 million vs. the cheapest county, Modoc, at $89,158.

10. Tax bite: Ownership equals property taxes. How would that cost for single-family homes slice up among the three proposed states? Southern California’s 2017 tax collections for single-family homes ran $12.13 billion or $4,372 per average taxpayer. Northern California property taxes totaled $15.53 billion or $5,419 per average taxpayer. And the biggest individual tax bills were in the new California where $10.38 billion in collections translates to an average $5,636 per property.