2008 has special significance for gold bugs, both because of the money they lost in August of year and the the money they made in the half-decade that followed. Today’s world is beginning to feel eerily similar.

Let’s start with a little background. The mid-2000s economy boomed in part because artificially low interest rates had ignited a housing mania which featured a huge increase in “subprime” mortgage lending. This – as all subprime lending binges eventually do – began to unravel in 2007. The consensus view was that subprime was “peripheral” and therefore unimportant. Here’s Fed Chair Ben Bernanke giving ever-credulous CNBC the benefit of his vast bubble experience.

The experts were catastrophically wrong, and in 2008 the periphery crisis spread to the core, threatening to kill the brand-name banks that had grown to dominate the US and Europe. The markets panicked, with even gold and silver (normally hedges against exactly this kind of financial crisis) plunging along with everything else. Gold lost about 20% of its market value in a single month:

Gold mining stocks – always more volatile than the underlying metal – lost about half their value.

Silver also fell harder than gold, taking the gold/silver ratio from around 50 to above 80 — meaning that it took 80 ounces of silver to buy an ounce of gold.

The world’s governments reacted to the crisis by cutting interest rates to record lows and flooding the financial system with credit. And precious metals and related mining stocks took off on an epic bull market. So it’s easy to see why the investors thus enriched look back on 2008 with nostalgia. 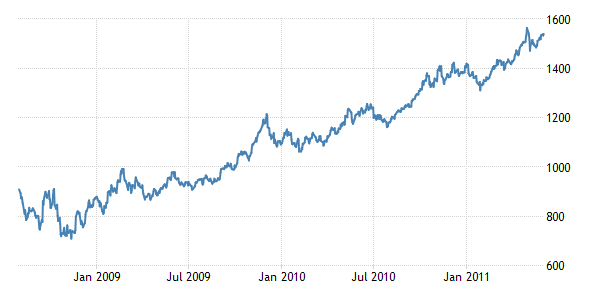 Now fast forward to Autumn 2018. The global economy is booming because of artificially low interest rates and massive lending to all kinds of subprime borrowers. One group of them – the emerging market countries – made the mistake of borrowing trillions of US dollars in the hope that the greenback would keep falling versus their national currencies, thus giving them a profitable carry trade.

Instead the dollar is rising, threatening to bankrupt a growing list of these countries – which, crucially, owe their now unmanageable debts to US and European banks. The peripheral crisis, once again, is moving to the core.

And once again, gold and especially silver are getting whacked. This morning the gold/silver ratio popped back above the 2008 level.

So are we back there again? Maybe. Some of the big western banks would probably fail if several major emerging markets default on their debts. And historically – at least since the 1990s – the major central banks have responded to this kind of threat with lower rates, loan guarantees and, more recently, massive and coordinated financial asset purchases.

So watch the Fed. If the EM crisis leads to talk of suspending the rate increase program and possibly restarting QE, then we’re off to the races. Just like 2008.