As hopes for a steeper yield curve have lifted bank stocks, Wells Fargo CEO Tim Sloan is apparently trying to bolster Wells’ lagging share price as the numerous scandals that have tarnished the banks credibility and triggered fines, criminal probes and an unprecedented Fed sanction have continued to take their toll.

Per Bloomberg, Sloan is planning to trim its workforce by between 5% and 10% over the next three years with the explicit goal of propping up the company’s shares. While the cuts could provide the bank with necessary cover to purge bad apples from its employee ranks, they have also been broadly expected since the bank reported one of its worst-ever mortgage numbers as the division struggles under the yoke of Fed sanctions and with a housing market that is already beginning to roll over.

In recognition of Wells’ collapse in mortgage lending, Sloan announced last month that the bank would lay off more than 600 employees from its mortgage division after losing the mantle of America’s top mortgage lender to non-bank fintech phenom Quicken Loans. Also, the fact that the housing market is beginning to roll over isn’t helping bolster the bank’s assets.

Sloan, who made the announcement to employees at a town-hall meeting on Thursday, has reduced headcount as he cleans up the bank and streamlines operations. The San Francisco-based lender is struggling to grow under the weight of a Federal Reserve assets cap. It had 265,000 employees as of June 30, according to a regulatory filing.

“It says something about the revenue environment for them,” Charles Peabody, an analyst at Portales Partners, said in an interview. “If they’re not in the midst of recognizing that revenues are in trouble, they’re anticipating it.”

Sloan has already promised $4 billion in cost cutbacks by the end of next year. The cuts announced Thursday have already been incorporated into the bank’s year-end expense targets for 2018, 2019 and 2020, according to the company.

“We are continuing to transform Wells Fargo to deliver what customers want – including innovative, customer-friendly products and services – and evolving our business model to meet those needs in a more streamlined and efficient manner,” Sloan said in a statement.

Wells shares have climbed 23% since Sloan took the reins in October 2016. However, it continues to lag the KBW Ban Index by 53%.

Meanwhile, analysts’ continued pessimism has sparked rumors that the bank’s board is seeking to oust Sloan. Earlier this year, reports circulated that they had approached Gary Cohn about taking over.

Analysts cut their estimates for Wells Fargo earnings again and again after the Fed punished the bank with an unprecedented cap on growing assets. The analysts began this year predicting a record $24 billion annual profit, and now the average estimate is for less than $21 billion, the weakest since 2012. Speculation that the bank wants a new CEO spilled into public this week when the New York Post said the board had approached former Goldman Sachs Group Inc. executive Gary Cohn. Cohn, who earlier this year finished a stint as a White House adviser, denied the report, as did Wells Fargo Chair Betsy Duke, who said Sloan “has the unanimous support of the board, and this support has never wavered.”

But with the bank unable to meaningfully expand its assets thanks to the Fed’s sanctions, Sloan has few alternatives aside from trimming head count and costs if he wants to impress the analysts. Expect more heads to roll in the near future. 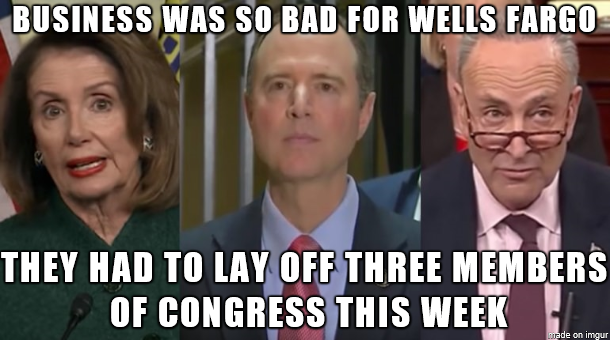