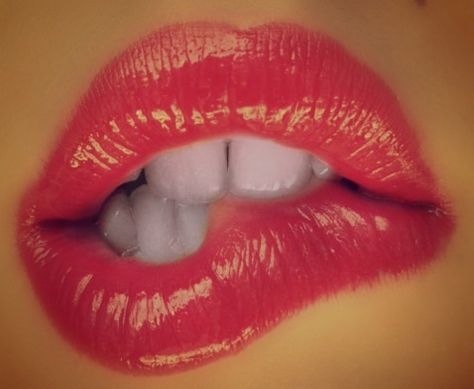 When it comes to the growth dynamo behind the global economy, nobody can match the US consumer – not even China: accounting for trillions in annual spending, the US consumer, who represents roughly 70% of US GDP, is also responsible for roughly 17% of global GDP, slightly ahead of the entire country of China. 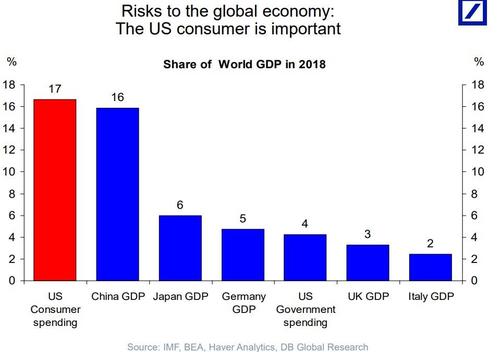 However, as recent economic data has shown, the future of the US consumer is suddenly looking ominously cloudy, for two big reasons: rising interest rates, which as Deutsche Bank notes are “beginning to bite” as observed in the number of working hours in sector selling big ticket items… 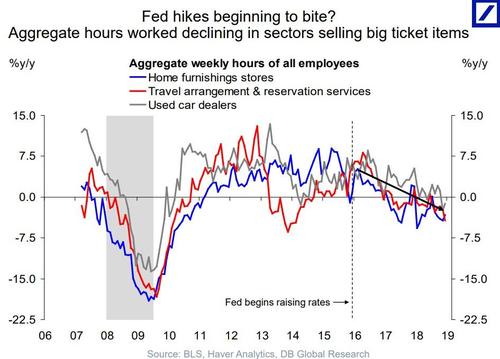 … and increasingly tighter loan terms, which coupled with softer loan demand means that the purchasing power of the US consumer is suddenly facing a very troubling air pocket. 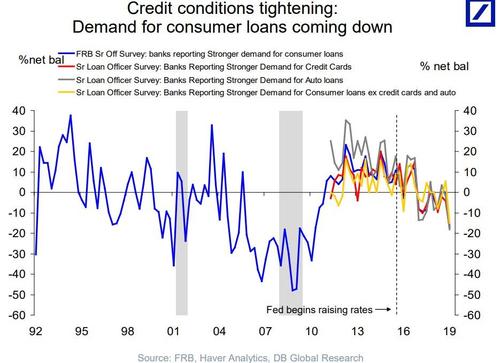 One driver behind the sudden drop in loan demand may also be the most obvious one: interest rates on credit cards have soared to the highest in over two decades… 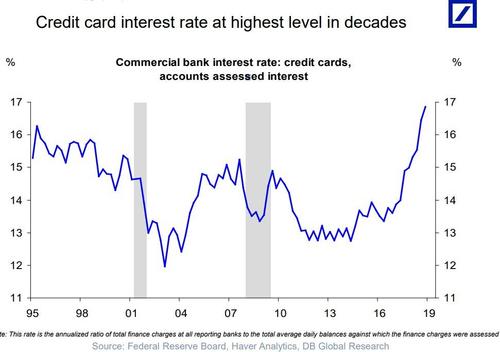 … while auto loan interest rates are now the highest since 2011 and rapidly rising, making the average auto loan payment the highest on record as reported recently. 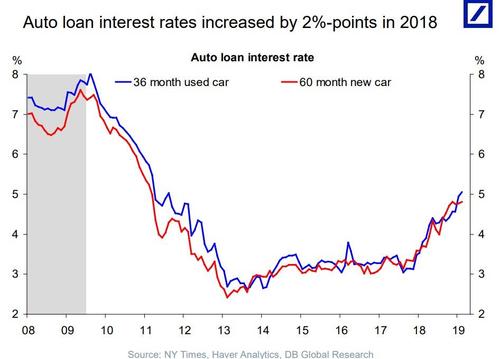 It’s not just credit cards and auto loans: the aggregate household interest payment has soared at a 15% Y/Y rate. Virtually every prior time when interest payments spiked this much, a recession promptly followed. 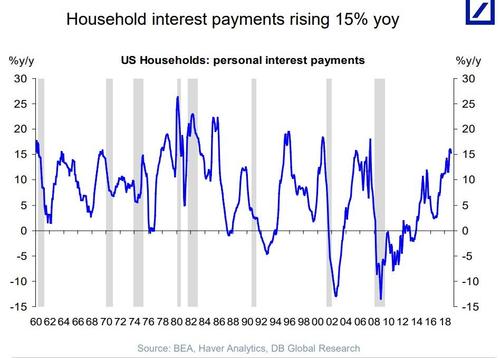 And while not quite at “redline levels” just yet, interest payments as a share of total household spending has jumped to the highest level since the financial crisis. 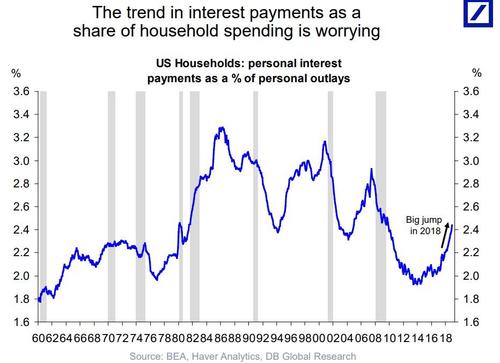 Meanwhile, as US purchasing power shrinks, so do intentions to purchase both cars… 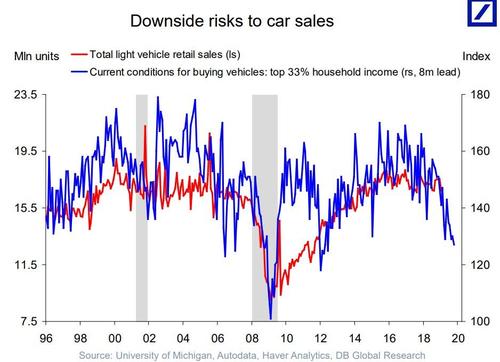 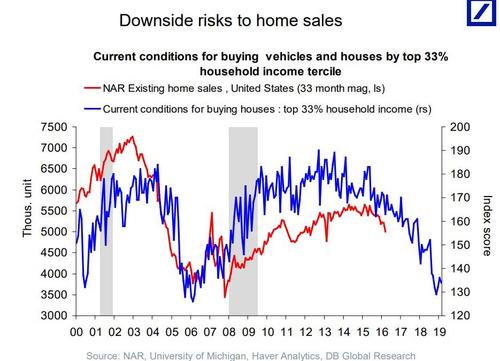 And while many legacy economists and pundits have said to ignore the dismal December retail sales print, considering the collapse in spending intentions for most other goods and services, it is only a matter of time before consumer spending slides into recession (and the latest retail sales print is confirmed as the accurate one). 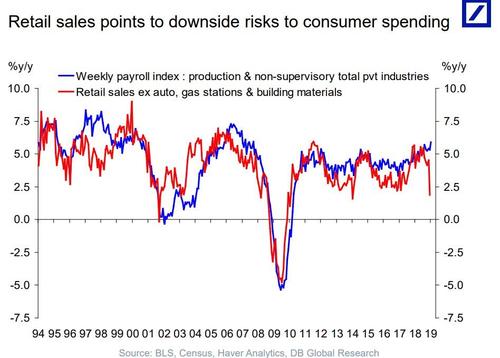 With rates rising, and with ever greater monthly payments, both credit card… 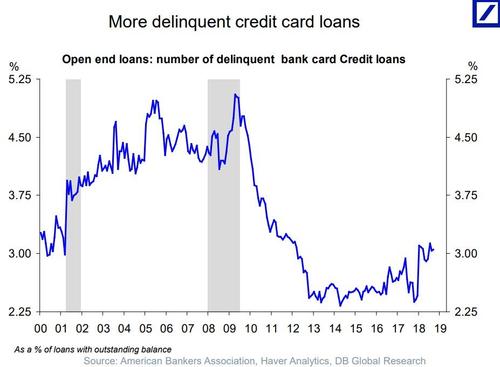 … and auto delinquencies are surging. 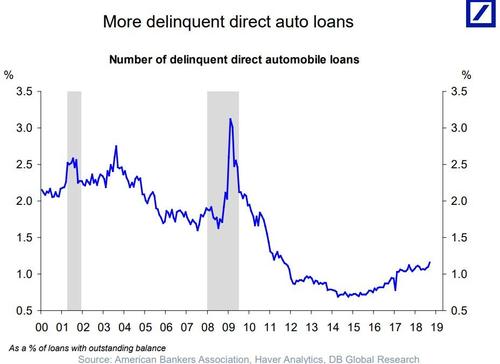 And so, with the credit cycle having peaked and absent rate cuts (and QE) by the Fed, only set to make life for US consumers even more difficult, it is just a matter of time before the economic slowdown follows. 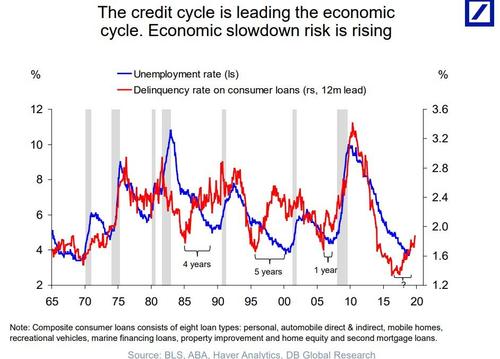 As usually happens, one generation is especially exposed to the upcoming period of economic weakness: the millennials, whose delinquency rate is already the highest among all age cohorts. 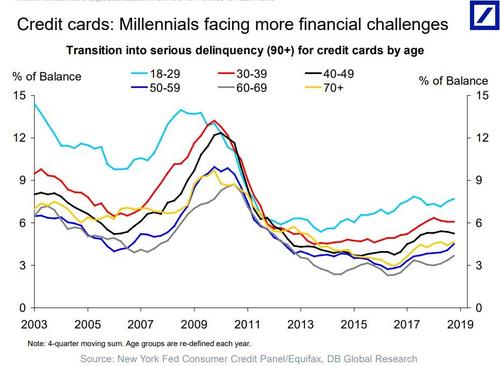 Finally, while all of the above have yet to hit the US economy where GDP recently printed at a solid 2.6% in Q4, in Q1 GDP is expected to plunge below 1% (Atlanta Fed has it at a paltry 0.3%); once that happens, US small business confidence which is already plunging at the fastest rate since the financial crisis after having soared higher after the Trump election, will crater sending the US economy into a steep recession if not worse. 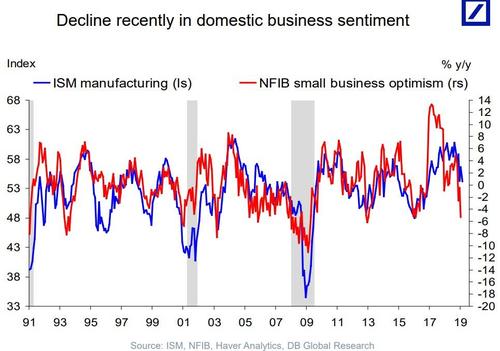