Back in 2017, ZeroHedge explained why the “fate of the world economy is in the hands of China’s housing bubble.” The answer was simple: for the Chinese population, and growing middle class to keep spending vibrant and borrowing elevated, it had to feel comfortable and confident that its wealth would keep rising. However, unlike the US where the stock market is the ultimate barometer of the confidence boosting “wealth effect”, in China it has always been about housing as three quarters of Chinese household assets are parked in real estate, compared to only 28% in the US, with the remainder invested in financial assets.

Beijing knows this, of course, which is why China periodically and consistently reflates its housing bubble any time it feels the broader economy is slowing, hoping that any subsequent popping of the bubble, which happened in late 2011 and again in 2014, will be a controlled, “smooth landing” process. For now, Beijing has been successful in maintaining price stability at least according to official data, allowing the air out of the “Tier 1” home price bubble which peaked in early 2016, while preserving modest home price appreciation in secondary markets.

How long China will be able to avoid a sharp price decline remains to be seen, but in the meantime another problem faces China’s housing market: in addition to being the primary source of household net worth – and therefore stable and growing consumption – it has also been a key driver behind China’s economic growth, with infrastructure spending and capital investment long among the biggest components of the country’s goalseeked GDP. One result has been China’s infamous ghost cities, built only for the sake of Keynesian spending to hit a predetermined GDP number that would make Beijing happy.

Meanwhile, in the process of reflating the latest housing bubble, another dangerous byproduct of this artificial housing “market” has emerged: tens of millions of apartments and houses standing empty across the country. As we reported recently, according to recent research, roughly 22% of China’s urban housing stock is unoccupied, according to Professor Gan Li, who runs the main nationwide study. That amounts to more than 50 million empty homes. 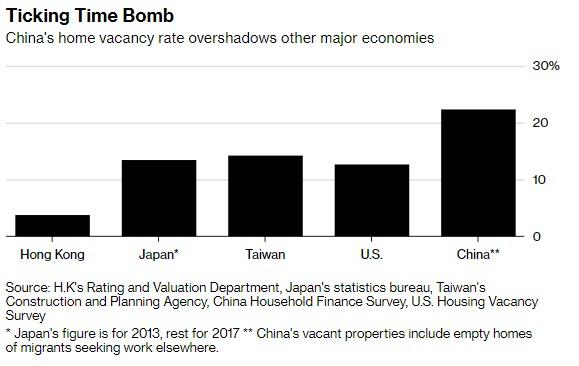 The reason for the massive empty inventory glut: to keep supply low and prices artificially elevated by taking out as much inventory off the market as possible. This, however, works both ways, and while it helps boost prices on the way up as the economy grow and speculators flood the housing market with easy money, the moment the trend flips the spike in supply as empty units are offloaded will lead to a panic liquidation of homes, resulting in what may be the biggest housing market crash ever observed, and putting the US home bubble of 2006 to shame.

Indeed, as Bloomberg noted, the “nightmare scenario” for Chinese authorities is that owners of unoccupied dwellings rush to sell when cracks start appearing in the property market, causing a self-reinforcing downward price spiral.

Which is why preserving the narrative (or rather myth) of constantly rising prices is so critical for China: any cracks in the facade of the price appreciation story could have a dire consequence first for the housing market, and then, the broader economy whose growth is already the slowest in modern Chinese history, as any scramble to liquidate inventory could promptly result in a bidless market as the tens of millions of empty units are suddenly exposed for both buyers and sellers to see.

While the key role of China’s housing market in the country’s economy, and thus the world’s, has long been known, a recent troubling development is that despite what Beijing deems stable home prices, the foundations behind the housing market are starting to crack. As the WSJ recently reported, in early December, a group of homeowners stormed the sales office of their Shanghai complex, “Central Washington”, whose developer, Shanghai Zhaoping Real Estate Development, was advertising new apartments at a fraction of the prices of the ones sold earlier in the year. One apartment owner said the new prices suggested the value of the apartment she bought from the developer in March had dropped by about 17.5%.

“There are people who bought multiple homes who are now trying to sell one to pay off the mortgage on another,” said Ran Yunjie, a property agent. One of his clients bought an apartment last year for about $230,000. To find a buyer now, the client would have to drop the price by 60%, according to Ran.

Meanwhile, in a truly concerning demonstration of what will happen when the bubble finally bursts, in October we reported that angry homeowners who paid full price for units at the Xinzhou Mansion residential project in Shangrao attacked the Country Garden sales office in eastern Jiangxi province last week, after finding out it had offered discounts to new buyers of up to 30%.

Country Garden cut the selling price at one of its residential developments by 1/3. Those who paid full price smashed the sales office. Similar incidents had happened before, and will again. It’s impossible to remove “the guarantee of principal”（刚性兑付）in China. pic.twitter.com/UxHFODYxmc

“Property accounts for roughly 70 per cent of urban Chinese families’ total assets – a home is both wealth and status. People don’t want prices to increase too fast, but they don’t want them to fall too quickly either,” said Shao Yu, chief economist at Oriental Securities. “People are so used to rising prices that it never occurred to them that they can fall too. We shouldn’t add to this illusion,” Shao added, echoing Ben Bernanke circa 2005.

The bottom line is that just like true price discovery for US capital markets is prohibited (and sees Fed intervention any time there is an even modest, 10-20% drop in asset prices) or else the risk of an all out panic is all too real, in China true price discovery is also not permitted, however when it comes to the country’s all important, and wealth effect boosting, real estate.

Which is a problem, because whereas China suddenly appears to be suffering from all the conventional signs of deflation in the auto retail sector, where as we noted previously, neither lower prices nor easier loans have managed to put a dent the ongoing demand plunge… 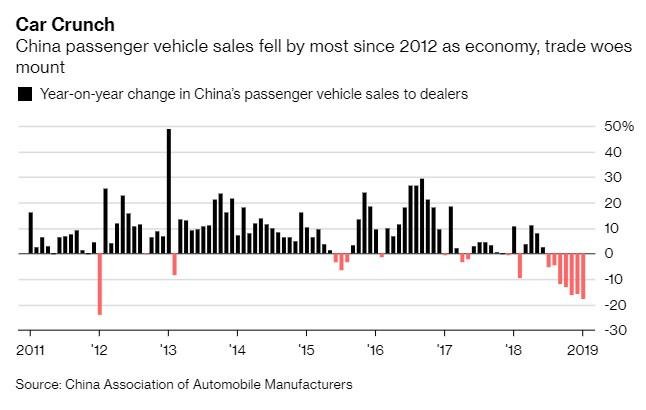 … the same ominous price cuts – which are clearly meant to boost flagging demand – are starting to emerge in China’s housing sector.

Case in point, according to China’s Paper, Hui Ka Yan, the Chairman of Evergrande, China’s biggest property developer, and China’s second richest person announced it must ramp up home sales and to do that it would sell all its properties at a 10% discount after its home sales tumbled in January amid a cooling market. 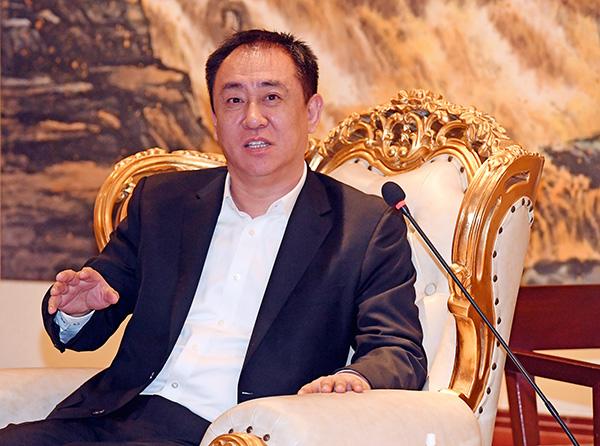 The fact that Evergrande has had financial difficulties for the past year is not new. In November, Evergrande, which carries the industry’s largest debt pile of any Chinese housing developer, was caught in a vicious funding squeeze and raised eyebrows with a $1.8BN, 5-year bond deal, which it had to pay a whopping 13.75% coupon, prompting analysts to say the move “carried a whiff of desperation.” The fact that chairman Hui Ka Yan, China’s second-richest person, bought $1bn of it himself, added to a sense that outside investors were shunning the company.

In many ways, Evergrande had no choice: after the property market boomed for the past three years, helping to power the economy through Xi Jinping’s crucial political transition year of 2017, in 2018 the market slowed sharply, after local governments shifted focus to controlling frothy prices and China Development Bank, the policy lender, phased out a $1 trillion subsidy program for homebuyers in smaller cities, where Evergrande’s projects are concentrated, the FT reported.

Even the official China News Service, usually a cheerleader for the economy, acknowledged recently that the property market “was a bit chilly”. Nomura chief China economist Ting Lu put it more starkly, forecasting a “frigid winter”.

The bigger problem for Evergrande, which had $208 billion in total liabilities at the end of June 2018 — the most of any Chinese developer — including $43bn maturing in 2019, is that should China’s housing market suffer a steep downturn, it will likely be the company to suffer the most, if for no other reason than its massive leverage which stood at a net debt to equity ratio of 400%.

Commenting on the bond sale, a high-yield debt underwriter at a western bank in Hong Kong told the FT that “Evergrande is very levered, so, yes, they do need cash,” said “That said, they are not a name we see as having a near-term liquidity crisis. That cannot be said about other smaller players.”

That was in November; and while there are no signs that the funding situation at Evergrande has deteriorated sharply since then – especially since the company is widely seen as systematically important and Beijing would never let it fail (although the same was said about Kaisa, another Chinese property developer that did default not too long ago), it now appears that the company has decided to start liquidating properties in an unexpected scramble to either gain market share, or to obtain much needed funding.

In any case, the fact that China’ largest property developer is now slashing prices across the board by as much as 10%, means that a deflationary hurricane is about to blow across what most see as the most important sector in China’s economy, and worse, should other property developers follow in slashing prices launching a race to the bottom, nobody knows how far prices could truly fall should a liquidation domino effect ensue.

What is most troubling however, is that as recently as November, the property slowdown was seen to be in large part due to efforts by city governments to restrain runaway price increases, which has included draconian interventions such as price controls and sales bans.

However, now that Evergrande is rushing to slash prices, it appears that runaway home prices are no longer a concern for Beijing, and in fact, a far greater concern is how Beijing may intervene to prevent what could soon be a price plunge spiral; many have already speculated that Beijing will have no choice but to bar Evergrande’s sales. If it doesn’t, or if homeowners have already figured out that their home prices are floating in the sky on a bubbly foundation that has now burst, the knock on effect could be devastating as instead of an asset, China’s most popular and aspirational “wealth effect” product could turn into a liability overnight.

If that happens, no amount of intervention by Beijing could stop the avalanche of selling that would ensue, not to mention the deflationary shock wave that a hard landing – i.e. crash – in China’s housing market would launch across the entire world…