Confirming last week’s advance goods data which saw the biggest trade deficit on record in December, moments ago the BEA reported that the U.S. trade deficit soared to a 10-year high of $621 billion in 2018, jumping by $68.8 billion, or 12.5 percent in the year, and crushing Trump’s pledges to reduce it, as tax cuts boosted domestic demand for imports while the strong dollar and retaliatory tariffs weighed on exports.

The data release was originally delayed a month by the partial government shutdown. January figures are due March 27.

Worse, for goods only, the deficit with the world surged to a record $891.3 billion in 2018 from $807.5 billion the prior year, as merchandise deficits with Mexico and the European Union also hit records. Offsetting the record good deficit was the surplus in services which kept rising, and also hit a a record – in the other direction – rising to a $270.2 billion surplus in 2018.

The reason for the massive jump in the deficit is that while exports increased $148.9 billion or 6.3% as shipments of goods including crude oil, petroleum products and aircraft engines increased. However, imports increased even more, some 7.5%, or $217.7 billion, on purchases of items from pharmaceuticals to computers, along with services such as travel.

On a monthly basis, the December deficit soared from $50.3 billion to $59.8 billion, also a 10-year high and far worse than the consensus estimate of $57.9 billion. 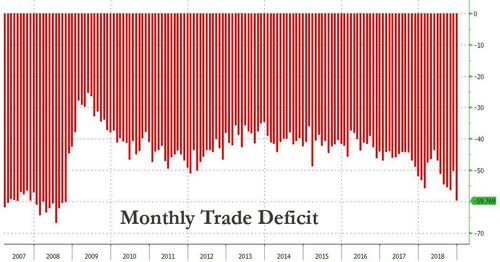 How did the deficit soar so much in one month? Simple: less exports, more imports, as exports fell 1.9% from the prior month, the biggest decline since early 2016, to $205.1 billion, on lower shipments of civilian aircraft, petroleum products and corn.

Also worth noting: the December goods deficit hit an all time high.

Ironically, the biggest culprit was China, as the deficit with Beijing – the target of Trump’s trade war – hit a record $419.2 billion in 2018, following the previously noted plunge in Chinese imports from the US. 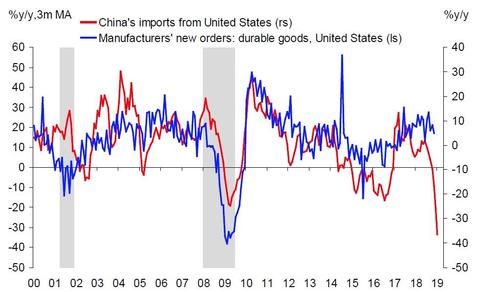 Ironically, as Bloomberg notes, while Trump has repeatedly cited the deficit as evidence of the failure of his predecessors’ trade policies, the gap has surged by $119 billion during his two years as president. Even if he completes an accord to end the tariff war with China, substantially shrinking the deficit may prove tough as cooling global growth weighs on exports while domestic demand keeps driving shipments from abroad.

And so Trump is trapped: if he concedes the trade war to China just to keep his precious stock market higher, the deficit will continue rising; if on the other hand, Trump pushes for a hard line on trade, the S&P – which has now priced in the end of the trade war – will tumble. The ball is now in Trump’s court which option to choose.