After years of farm income falling and the U.S./China trade war now taking its toll on the sector, Wall Street banks look as though they are giving up on lending to farmers, according to Reuters. 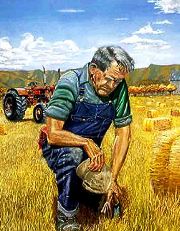 Meanwhile, total U.S. farm debt is slated to rise to $427 billion this year, up from an inflation adjusted $317 billion just 10 years ago. The debt is reaching levels not seen since the 1980’s farm crisis.

An analysis performed by Reuters identified the banks by their quarterly filings of loan performance with the FDIC and grouped banks that were owned by the same holding company.

The slide in farm lending is happening as cash flow worries surface for farmers. We’ve highlighted numerous instances of farmers under pressure due to the U.S./China trade war and poor conditions, like this report from early June and this report on farmer bankruptcies from May.

Sales of products like soybeans have fallen significantly since China and Mexico imposed tariffs in retaliation to U.S. duties on their goods. The trade war losses exacerbated an already strained sector, under pressure from “years over global oversupply and low commodity prices.”

“My phone is ringing constantly. It’s all farmers. Their banks are calling in the loans and cutting them off.”

At the same time, surveys are showing that demand for farm credit is growing. The demand is most pronounced among Midwest grain and soybean producers. Having fewer options to borrow could threaten the survival of many farms, especially when incomes have been cut in half since 2013.

Gordon Giese, a 66-year-old dairy and corn farmer in Mayville, Wisconsin, was forced to sell most of his cows, his farmhouse and about one-third of his land last year to pay off his debt obligations.

“If you have any signs of trouble, the banks don’t want to work with you. I don’t want to get out of farming, but we might be forced to.”

Michelle Bowman, a governor at the U.S. Federal Reserve called the decline in farm incomes a “troubling echos of the 1980’s farm crisis”.

The four-quarter growth rate for farm loans at all FDIC-insured banks slowed from 6.4% in December 2015 to 3.9% in March 2019. But many smaller, regional banks depend on farms as the main key to their loan books.

Curt Everson, president of the South Dakota Bankers Association said: “All you have are farmers and companies that work with, sell to or buy from farmers.”