Given where Ford’s CDS was trading – more in line with B1/BB- rated American Axle – it should hardly come as a surprise that S&P has finally bitten the bullet and downgraded Ford debt to junk. 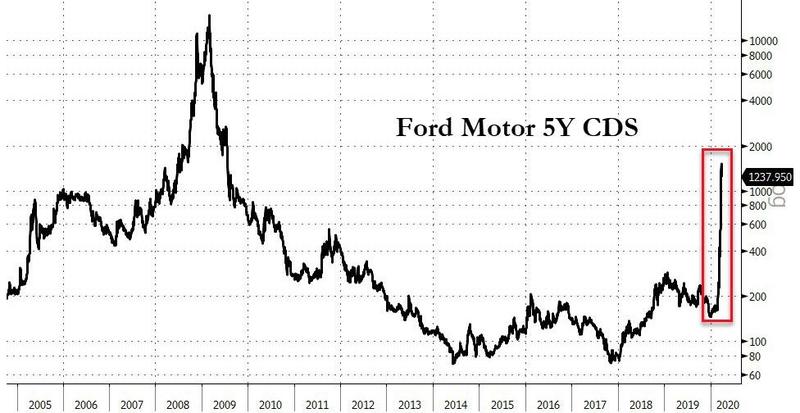 The decision to downgrade Ford Motor Co. from investment grade to speculative grade reflects that the company’s credit metrics and competitive position became borderline for the investment-grade rating prior to the coronavirus outbreak, and the expected downturn in light-vehicle demand made it unlikely that Ford would maintain the required metrics.

Ford Motor Co. announced it is suspending production at its manufacturing sites in Europe for four weeks and halting production in North America to clean these facilities and boost containment efforts for the COVID-19 coronavirus. We expect Ford’s EBITDA margin to remain below 6% on a sustained basis and believe that its free operating cash flow to debt is unlikely to exceed 15% on a consistent basis.

We are downgrading our long-term issuer credit rating to ‘BB+’ from ‘BBB-‘. At the same time, we are assigning issue-level ratings of ‘BB+’ on Ford’s unsecured debt.

We are also placing the ratings on Credit Watch with negative implications, which reflects at least a 50% chance that we could lower the ratings depending on factors such as the duration of the plant shutdowns, the rate of cash burn, and the adequacy of Ford’s liquidity position.

With a total amount of public bonds & loans outstanding around $95.8 billion, according to data compiled by Bloomberg, Ford has just become one of the largest fallen angels yet.

Will this sudden large fallen angel lead to further repricing in the junk bond market, just as the market is dead-cat-bouncing on Fed intervention?

Perhaps of most note, the downgrade to junk means – we think – that this disqualifies Ford debt from The Fed’s corporate-bond-buying bandwagon – which is likely to make the cliff for Ford debt even more dramatic (especially after rallying so hard the last two days).