When Goldman’s crude oil analysts wrote on Monday that “This Is The Largest Economic Shock Of Our Lifetimes“, they echoed something we said last week – nameley that the record surge in excess oil output amounting to a mind blowing 20 million barrels daily or roughly 20% of global demand… 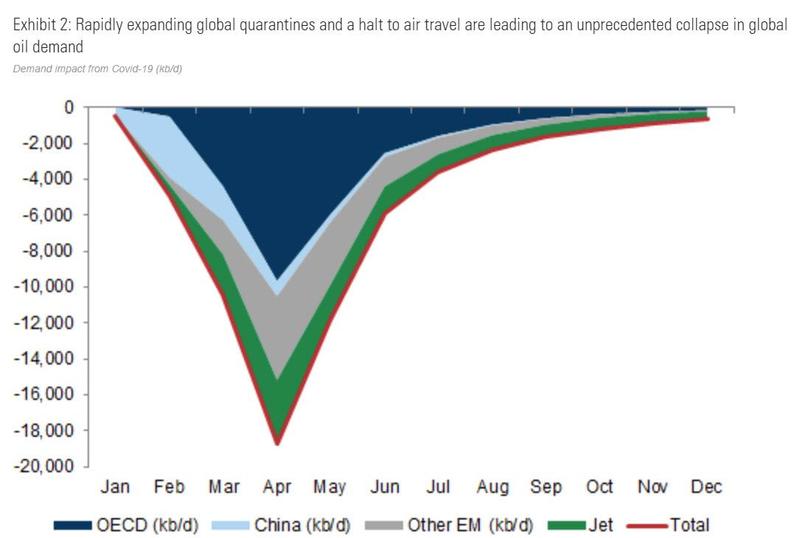 … which is the result of the Saudi oil price war which has unleashed a record gusher in Saudi oil production, coupled with a historic crash in oil demand (which Goldman estimated at 26mmb/d), could send the price of landlocked crude oil negative: “this shock is extremely negative for oil prices and is sending landlocked crude prices into negative territory.”

We didn’t have long to wait, because while oil prices for virtually all grades have now collapsed to cash costs…

… Bloomberg points out that in a rather obscure corner of the American physical oil market, crude prices have now officially turned negative as “producers are actually paying consumers to take away the black stuff.”

The first crude stream to price below zero was Wyoming Asphalt Sour, a dense oil used mostly to produce paving bitumen. Energy trading giant Mercuria bid negative 19 cents per barrel in mid-March for the crude, effectively asking producers to pay for the luxury of getting rid of their output. 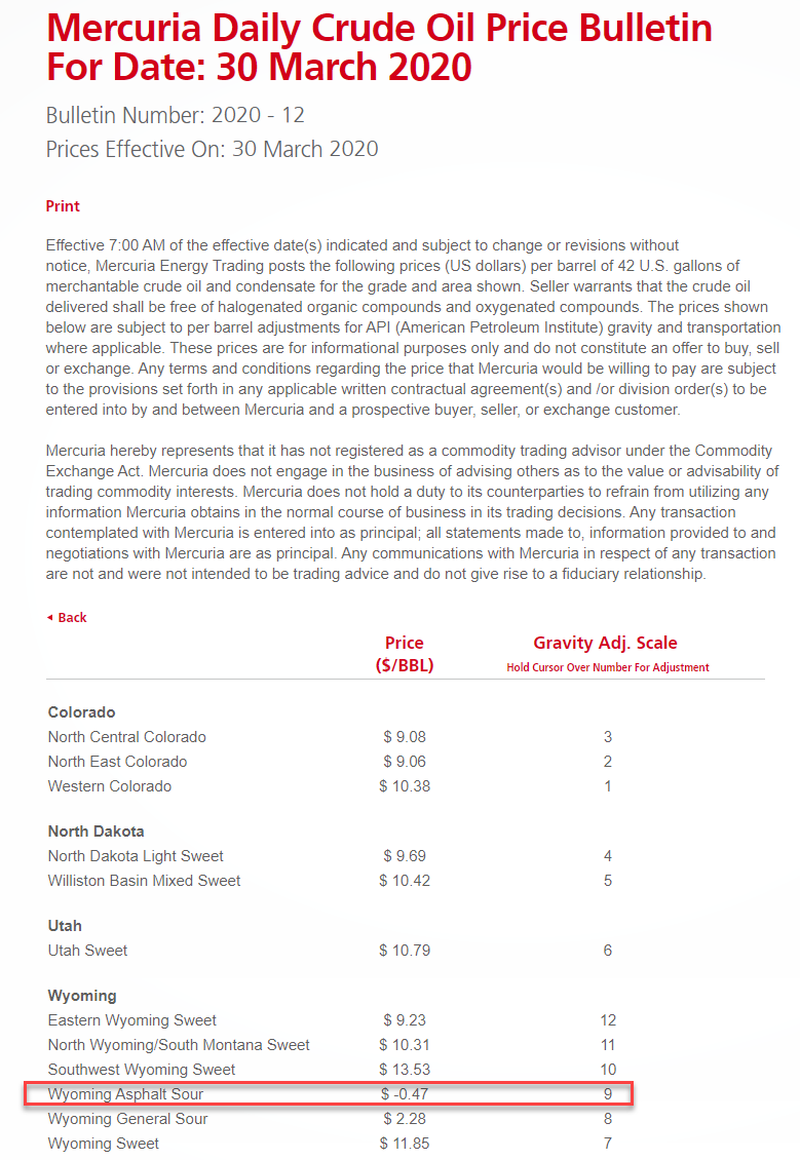 Echoing Goldman, Elisabeth Murphy, an analyst at consultant ESAI Energy said that “these are landlocked crude with just no buyers. In areas where storage is filling up quickly, prices could go negative. Shut-ins are likely to happen by then.”

While Brent and WTI are hovering just around $20 a barrel, in the world of physical oil where actual barrels change hands  producers are getting much less according to Bloomberg as demand plunges due to the lock down to contain the spread of the coronavirus.

Oil traders believe other crude streams are likely to see negative prices soon at the well-head as refiners reduce the amount of crude they process, leaving some landlocked crude without easy access to pipeline trapped. Goldman’s Jeffrey Currie explained this pricing divergence as follows:

Brent is a waterborne crude priced on an island in the North Sea, 500 meters from the water. In contrast, WTI is landlocked and 500 miles from the water. As I like to say, I would rather have a high-cost waterborne crude oil that can access a ship than a landlocked pipeline crude sitting behind thousands of miles of pipe, like the crude oils in the US, Russia and Canada.

As we noted last night, when we asked who would see zero dollar oil first, several grades in North America are already trading in single digit territory as the market tries to force some output to shut-in. Canadian Western Select, the benchmark price for the giant oil-sands industry in Canada, fell to $4 on Monday, while Midland Texas was last seen trading just around $10. 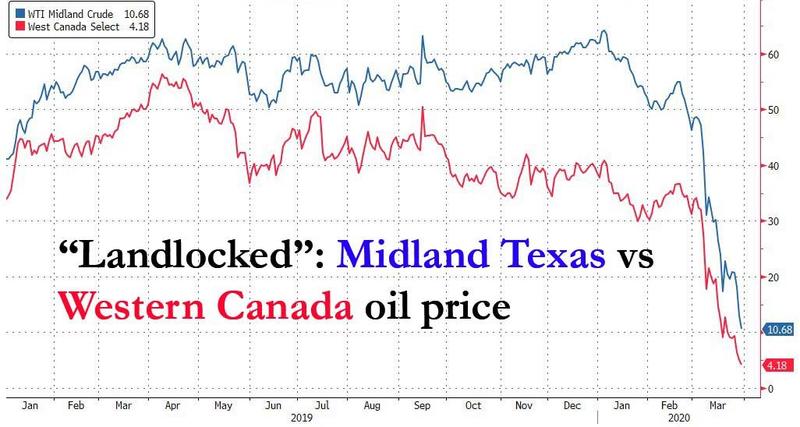 Southern Green Canyon in the Gulf of Mexico is worth $11.51 a barrel, Oklahoma Sour is changing hands at $5.75, Nebraska Intermediate at $8, while Wyoming Sweet prices at $3 a barrel, per Bloomberg.

While there is very little hope of a dramatic improvement in the situation, late on Tuesday, President Trump said the U.S. would meet with Saudi Arabia and Russia with the goal of halting the historic plunge in oil prices. Trump, speaking at the White House Tuesday, said he’s raised the issue with Russian President Vladimir Putin and Saudi Crown Prince Mohammed bin Salman.

It’s unclear what if anything Trump “can do” in what is effectively a collusive war between the two nations meant to crush shale oil.

Trump’s intervention comes as April shapes up to be a calamitous month for the oil market. Saudi Arabia plans to boost its supply to a record 12.3 million barrels a day, up from about 9.7 million in February. At the same time, fuel consumption is poised to plummet by 15 million to 22 million barrels as coronavirus-related lock downs halt transit in much of the world.

There is another problem: oil demand has been so battered by government lock downs to stop the spread of the coronavirus that any conceivable oil production cut agreement between the U.S., Canada, Russia and OPEC members would still fall well short of what’s needed to shore up the market, Goldman calculated. In fact, assuming roughly 20 million in excess supply currently, the only thing that could balance the oil market is nothing short of both Saudi Arabia and Russia halting all output together. And that will never happen.

Finally, below we put the “long history” of oil prices in context: