2020 is shaping up to be nothing short of a complete and total meltdown for the U.S. auto industry.

The industry was already barely holding on by a thread before the coronavirus pandemic started, with China leading the rest of the globe’s auto industries into recession over the last 18 months. Now, in a post-coronavirus world, automakers in the U.S. are expecting nothing less than full collapse.

And the things that were barely holding the industry up to start 2020, namely low rates and modest consumer confidence, don’t matter. Businesses are closed, would-be buyers are strapped for cash and the country’s economy has simply been turned off. The industry’s annualized selling rate could slow to 11.9 million in March, according to Edmunds. 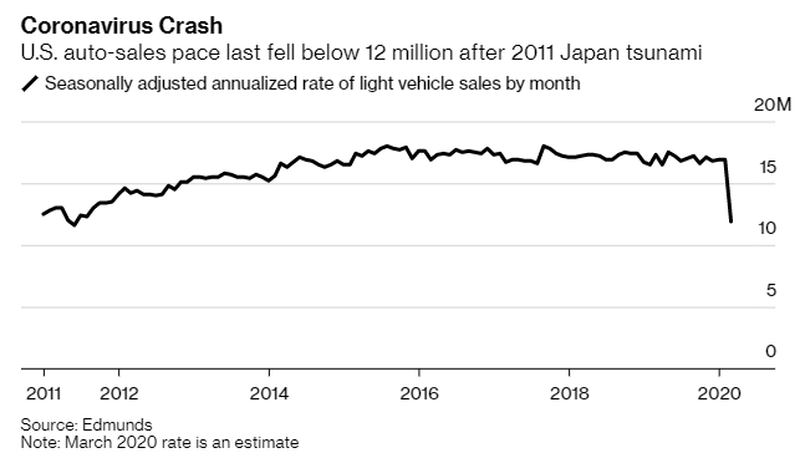 The coronavirus lock downs across the nation will also put a damper on April, which is traditionally a good month for auto sales. Ford is all but shutting down and names like Fiat and GM are expected to release extremely weak numbers later this week.

Morgan Stanley analyst Adam Jonas put it simply: “There are basically no U.S. auto sales right now. Investors have fully embraced the reality that the U.S. auto industry may be shut down for one or two full months. We’re now being asked to run scenarios of six-month or nine-month shutdowns.”

The President’s extension of his social distancing guidelines to the end of April will also act as a headwind for the industry. Factory shutdowns that started in March will now head toward their second month of no production, as the U.S. consumer, for the most part, remains stuck at home.

Jeff Schuster, senior vice president of forecasting for research LMC Automotive commented: “We just don’t know when and how this ends, and that’s the biggest problem right now. All of this uncertainty creates a lot of angst and that has been spreading really like a wildfire through the industry.”

He predicts that the industry’s annualized selling rate will continue to plummet to between 9 million and 10 million vehicles. Those numbers are well below the 10.4 million autos sold in 2009, the year GM and Chrysler both filed for bankruptcy. J.P. Morgan has an even more pessimistic view, with estimates of a pace of 6 million to 7 million vehicles over the next month.

More data is on its way on Wednesday, when most automakers will report quarterly data. The results are expected to be grim, despite many people expecting the declines.

Richard Curtain, University of Michigan economist and director of surveys said: “Mitigating the negative impacts on health and finances may curb rising pessimism, but it will not produce optimism. Rebuilding confidence first requires a clear and unmistakable turning point in the fight against the virus as well as continued financial support to avoid a deeper and extended recession.”

ZeroHedge highlighted the collapse of the industry in China in February, where industry wide, sales fell 79% in February, marking the biggest ever monthly plunge on record. 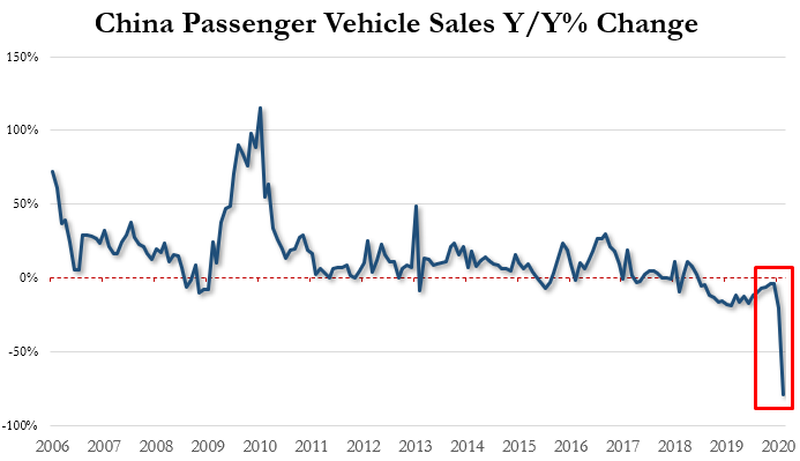 Sales for February fell to just 310,000 vehicles from a year earlier, marking the 20th straight month of declines.

The U.S. can expect a similar type of rude awakening for its March numbers. The only question now is what quarter – if any – the industry will start to see some type of a rebound. At this point, analysts have already skipped over the idea of the second or third quarter offering hope, and have moved on to eye the fourth quarter.

Schuster concluded: “Do we get any lift in the fourth quarter? That’s really what’s in question. There is the potential that we have waves of infection, where you essentially shut things down for a short period to try to manage outbreaks. If we’re dealing with that next year, obviously we don’t get the rebound.”