The plandemic-induced summer of escape from New York continues at a moment violent crime is on the rise, restaurant and public venue closures make the city less appealing, public transit is reeling in debt, and remote working set-ups are giving those with means greater mobility.

More worrisome trends… or rather signs of the times signalling that for many the gentrified Big Apple has as one family recently put it reached its “expiration date”. Two separate NY Times reports on Sunday detailed that moving companies are so busy they’re in an unprecedented situation of having to turn people away, while simultaneously the suburbs are witnessing an explosion in demand “unlike any in recent memory”. 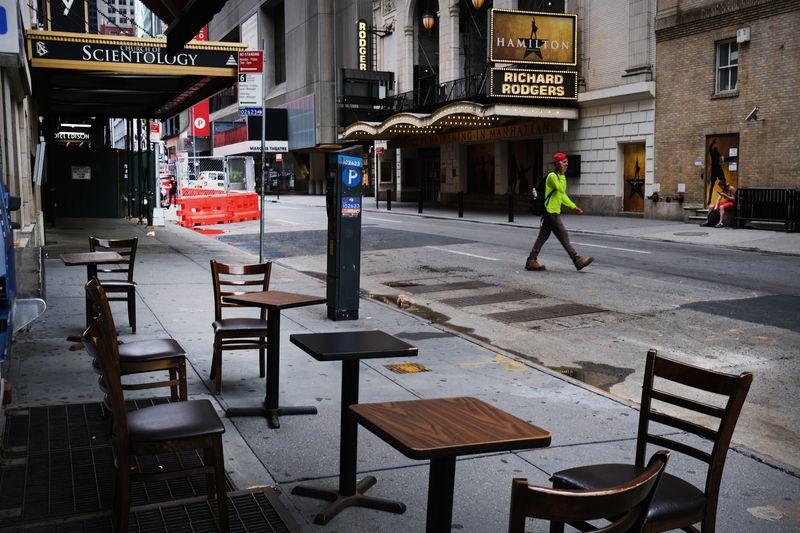 And then there’s fresh data showing that during the plandemic Americans are fast getting the hell out of the more expensive “real estate meccas” of New York and New Jersey.

First, New York City moving are reporting a rush of customers so high it feels like “move out day on a college campus”:

According to FlatRate Moving, the number of moves it has done has increased more than 46 percent between March 15 and August 15, compared with the same period last year. The number of those moving outside of New York City is up 50 percent — including a nearly 232 percent increase to Dutchess County and 116 percent increase to Ulster County in the Hudson Valley.

“The first day we could move, we left,” a dentist was cited as saying of the moment movers were declared an “essential service” by Gov. Cuomo late March. Her family moved to Pennsylvania where they had relatives.

And second, the Times details the unprecedented boom in the suburban real estate as an increasingly online workforce is fed up with closures in the city, losing its appeal and vibrancy. 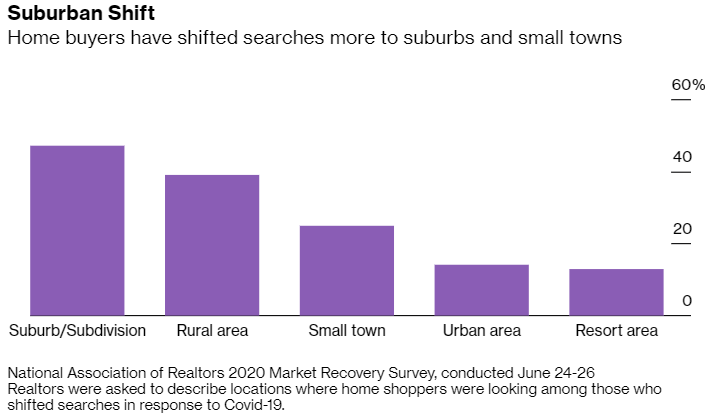 July alone witnessed a whopping 44% increase in home sales among suburban counties near NYC compared to the same month last year, as the report details:

Over three days in late July, a three-bedroom house in East Orange, N.J., was listed for sale for $285,000, had 97 showings, received 24 offers and went under contract for 21 percent over that price.

On Long Island, six people made offers on a $499,000 house in Valley Stream without seeing it in person after it was shown on a Facebook Live video. In the Hudson Valley, a nearly three-acre property with a pool listed for $985,000 received four all-cash bids within a day of having 14 showings.

Since the pandemic began, the suburbs around New York City, from New Jersey to Westchester County to Connecticut to Long Island, have been experiencing enormous demand for homes of all prices, a surge that is unlike any in recent memory, according to officials, real estate agents and residents.

They’re not just fleeing for the suburbs or upstate, but also to the significantly cheaper and lower cost of living areas of the country like Texas, Florida, South Carolina, and Oregon, or to rural areas.

COVID-1984 is fast reviving American mobility on scales reminiscent of the mid-20th century. Bloomberg describes separately that“Far more people moved to Vermont, Idaho, Oregon and South Carolina than left during the pandemic, according to data provided to Bloomberg News by United Van Lines.” 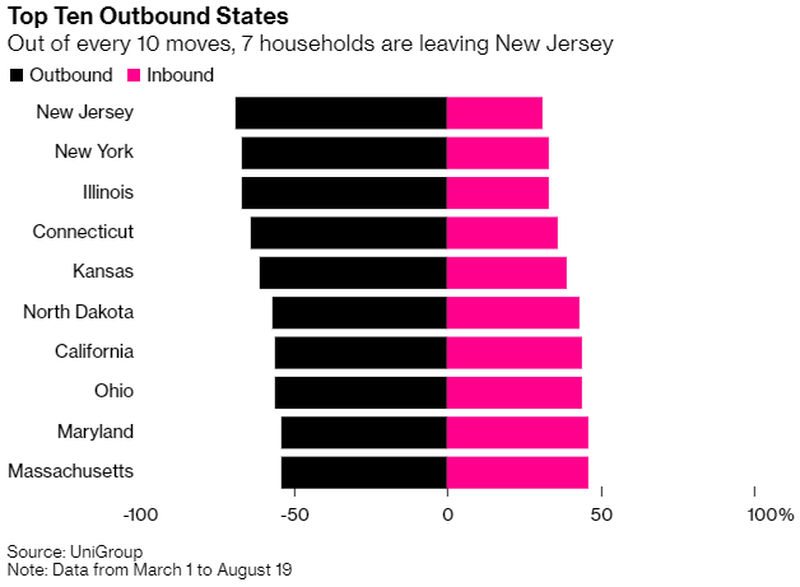 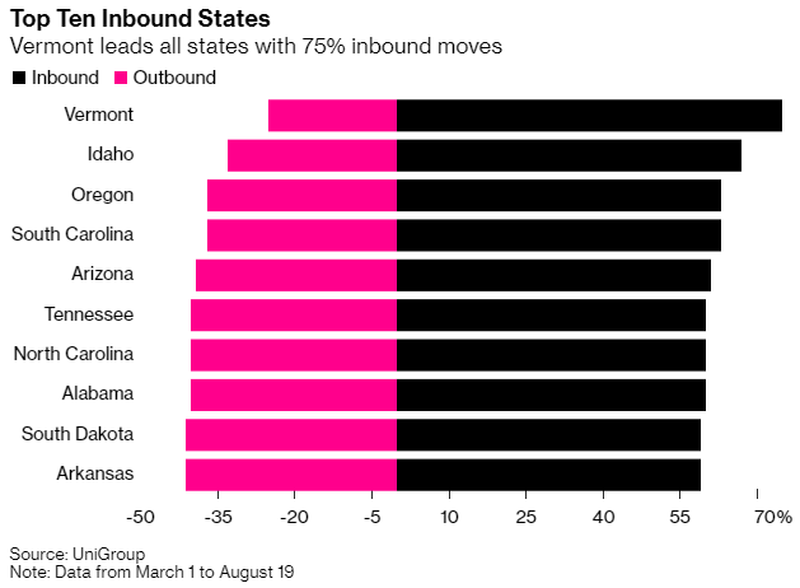 “On the other hand, the reverse was true for New York and New Jersey, which saw residents moving to Florida, Texas and other Sunbelt states between March and July,” the report finds.

General fear of living in densely populated areas, better enterprise video communications platforms making possible fully remote workplaces which in some cases are ‘canceling’ the traditional office space altogether, and a lack of nightlife or entertainment allure of big cities is driving the exodus.

In addition to the aforementioned states, “Illinois, Connecticut and California, three other states with big urban populations, were also among those losing out during the plandemic,” according to United Van Lines data.