When we recently described the upcoming “Unprecedented monetary overhaul” which will come in the form of the Fed sending out digital dollars directly to “each American”, we explained that “absent a massive burst of inflation in the coming years which inflates away the hundreds of trillions in federal debt, the debt tsunami that is coming would mean the end to the American way of life as we know it. And to do that, the Fed is now finalizing the last steps of a process that revolutionizes the entire fiat monetary system, launching digital dollars which effectively remove commercial banks as financial intermediaries, as they will allow the Fed itself to make direct deposits into Americans’ “digital wallets”, in the process enabling truly universal basic income, while also making Congress and the entire Legislative branch redundant, as a handful of technocrats quietly take over the United States.”

In short, we laid out the Fed’s true reasoning behind the coming Digital Dollars not as how Fed Chair Powell recently described them, which as a reminder was as follows:

… but as a short circuit to a clearly broken monetary transmission mechanism, one which seeks to facilitate universal basic income and unlimited helicopter money, by completely overhauling how money reaches Americans.

Of course, it would be heresy to admit that the Fed’s true motive is to effectively spark runaway inflation as that would provoke howls of outrage from ordinary Americans if they only learned that the $1000 or so in “free money” they would receive from the Fed was not a gift, but a curse which would make their cost of living unbearable in very short notice. And yet none other than DoubleLine recently penned a scathing op-ed admitting just that, warning that “The Pandora’s Box Of Fed’s Digital Currency Will Ignite An Inflationary Conflagration.“

Today, none other than BofA chief investment strategist also takes the plunge into “tinfoil land”, which of course is where the truth can be found, and admits the truth about digital currencies.

Hartnett begins by laying out a short history of revolutionary monetary policies, writing that in the past 13 years central banks have cut interest rates 972 times, bought $19tn of financial assets via QE, introduced NIRP, ZIRP, YCC, TLTROs, resulting in a near-record $16.8tn of negatively-yielding global bonds. 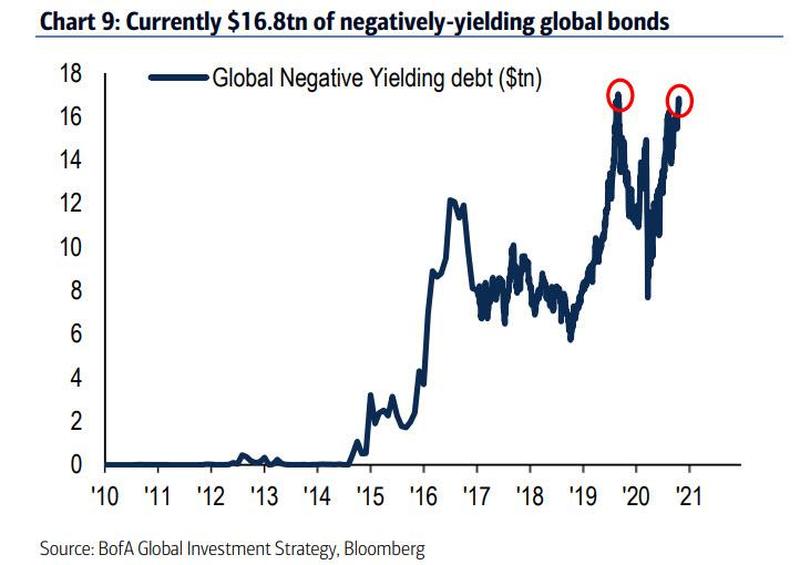 Hartnett lays out the 15 key “revolutionary” events in monetary policy since the Bear Stearns collapse in the table below: 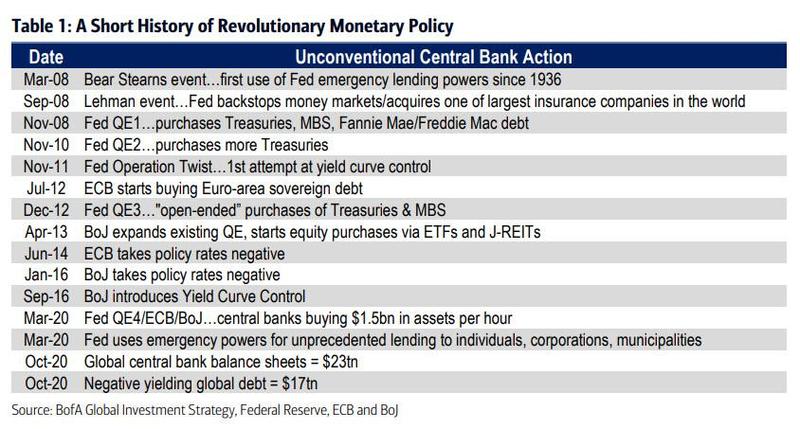 That’s the past, what about the future?

Here Hartnett echoes everything we have said recently on the matter, and there’s quite a bit of it…

… and writes that “the next frontier for central bank revolution is use of digital currencies as conduit for policies such as UBI (universal basic income), MMT (Modern Monetary Theory), student debt forgiveness, to induce sustained rise in inflation expectations.”

And since his job is to summarize trends into an actionable recommendation, he has a simple one: “own inflation assets.“

That, or just bet on continued dollar debasement as can be seen in the following:

“big picture of bigger government, smaller world, excess debt in 2020s will be financed via currency debasement, particularly reserve currency of US dollar; own volatility.”

Too simple? Here are the parting thoughts from DoubleLine credit portolfio manager Bill Campbell, which we presented in their entirety 3 weeks ago:

With QE, central banks have printed excess reserves that have benefited  only  the  very  wealthy  and  large  institutions.  The innovation of a digital currency system as described by Mastercard could deliver stimulus directly to consumers. Such a mechanism could open veritable floodgates of liquidity into the consumer economy and accelerate the rate of inflation. While central banks have been trying without success to increase inflation for the past decade, the temptation to put CBDCs into effect might be very strong among policymakers. However, CBDCs would not only inject liquidity into the economy but also could accelerate the velocity of money. That one-two punch could bring about far more inflation than central bankers bargain for.

When first implementing QE, central banks promised that this measure would be temporary and would be unwound after the crisis ended, a pledge that I have doubted for a while.8  Central  banks as we know have perpetuated QE as part of their updated toolbox of monetary policies. The first use of digital currencies in monetary policy might start small as policymakers, out of caution, seek to calibrate this experiment in quasi-fiscal stimulus. However, such initial restraint could give way to growing complacency and greater use of the tool – just as we saw with QE. The temptations of CBDCs are not limited to excesses in monetary policy.  CBDCs  also  appear  to  be  an  effective  mechanism  for bypassing the taxation, debt issuance and spending prerogatives of government to implement a quasi-fiscal policy. Imagine, for example,  the  ease  of  enacting  Modern  Monetary  Theory  via CBDCs. With CBDCs, the central banks would possess the necessary plumbing to directly deliver a digital currency to individuals’ bank accounts, ready to be spent via debit cards.

Let me quote again from Charles I. Plosser’s warning in 2012: “Once a central bank ventures into fiscal policy, it is likely to find itself under increasing pressure from the private sector, financial markets, or the government to use its balance sheet to substitute for other fiscal decisions.” With a flick of the digital switch, CBDCs can enable policymakers to meet, or cave in to, those demands – at the risk of igniting an inflation conflagration, abandoning what little still survives of sovereign fiscal discipline and who knows what else. I hope the leaders of the world’s central banks will approach this new financial technology with extreme caution, guarding against its overuse or outright abuse. It’s hard to be optimistic. Soon our monetary Pandoras will possess their own box full of new powers, perhaps too enticing to resist.

Source: ZeroHedge
*
*
*
The pending BANKING FOR ALL ACT… and you