(Peter Krauth) “Temporarily out of stock.” – That’s the message most hopeful physical silver buyers have been getting since the last days of January. Odds are bullion dealers going to have a tough time keeping any silver in stock.

Everyone is buying, and no one is selling the physical metal. Dealers are asking for 35% premiums… and that’s if you can get your hands on any silver at all.

And yet, I remember well, less than a year ago in mid-March when the world started a major lockdown in response to the Covid-19 pandemic. Gold and silver bullion dealers were nearly completely sold out within days. In some cases, silver premiums reached historic highs, near 100% of spot prices.

In the recent #silversqueeze hype, silver traded at an 8-year high, as demand was exploding. Silver has given back $2 since its $29 peak on Feb. 1. But it’s still up 20% since late November and has gained 125% since its March lows.

And silver stocks have been surging. It’s all related to the now infamous WallStreetBets calls to action, the latest of which targeted silver. It was enough to cause the Comex to raise silver margins by 18% after just two up days.

But silver’s story is still in its early days. Dramatically, higher silver prices are still squarely ahead.

Here’s What Really Happened to Silver

A Reddit subgroup called WallStreetBets sent out a call-to-action to buy silver on January 28th. Retail investors piled in en masse and kept doing so on Friday, Jan. 29 and Monday, Feb. 1. By Sunday, January 31, most bullion dealers were outright sold out. By Monday, February 1, silver was up nearly 8% from the Friday close. 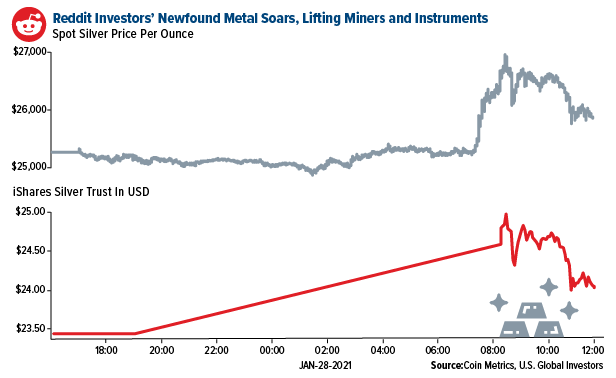 Silver had soared to an 8-year high. Silver stocks were ripping higher, and many were seeing their trading volumes explode anywhere from 6-10 times normal levels.

Some of this move will turn out to be a short-term speculative buying frenzy. But what this whole saga has done is to introduce a massive new following to the silver space.

Huge forces are going to keep pushing silver higher for years to come.

Supply peaked in 2015 and has been falling consistently for the last 5 years.

Not one of the top 10 silver-producing countries has escaped this trend. Several consecutive years of low prices have led to underinvestment and underexploration. Output has dropped along with reserves. According to the Silver Institute, global silver output was down 1% in 2019 year-over-year. (Other reason silver price is soaring: disruptions in Latin America – MINING.COM) As well, the Institute estimates that, thanks mostly to Covid-19 shutdowns, mined silver was down again in 2020 by 6.3%, reaching levels not seen for 9 years.

And with 70% of mined silver as a by-product of mining other metals, those miners are not motivated to produce more even when silver rises: it’s too small a portion of their revenues.

All this is happening while multiple demand forces are building.

Vehicle demand for silver is soaring. Whereas internal combustion engines need 15-28 grams of silver, EVs need double that amount at 25-50 grams per vehicle. Globally, EV sales are projected to rise dramatically. The Silver Institute projects a 50% rise in automotive silver demand, from 60M oz. currently to over 90M oz. in just 5 years. (Silver Consumption in the Global Automotive Sector to Approach 90 Million Ounces by 2025) 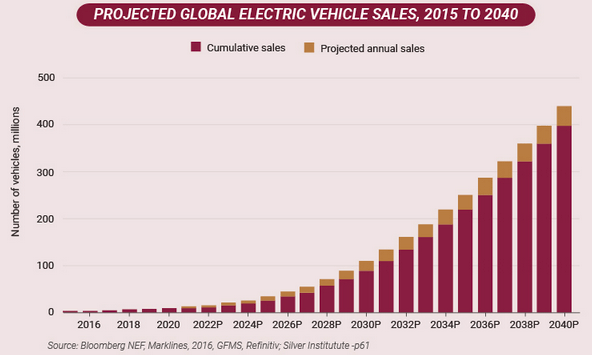 Meanwhile, the solar sector is also likely to boost silver demand. It currently represents 100M oz. of silver annually. And although efficiencies have been leading to lower silver consumption per solar panel, in my view expanding volumes will more than make up for that.

However, I believe the wild card will be investment demand for silver. Even without the dramatic, explosive action in silver markets over the last week, investment demand has been gradually increasing over the last 5 years. 2019 saw an impressive increase of 12% over 2018. But 2020 was an absolute standout, with a 16% increase over 2019. None of this happened with any hype.

That translates into global silver ETF holdings now in the 1 billion ounce range. 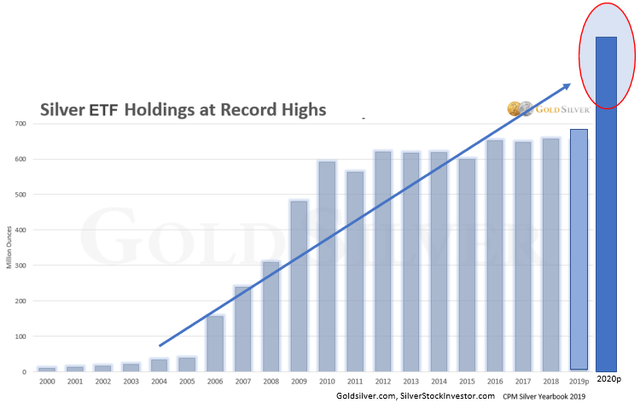 Consider that these total holdings are the equivalent of a whole year’s silver supply: mine production and recycling.

And yet silver remains stunningly cheap, especially relative to gold. 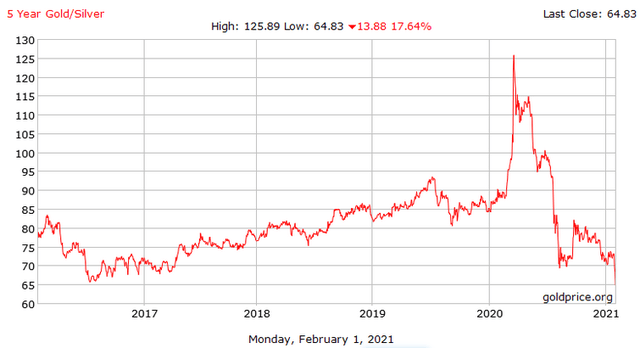 The gold silver ratio has reversed in a dramatic way from its all-time high last March at 125, and has just broken below support at 70. I believe it’s heading towards 55 or even 50. Silver remains cheap on a fundamental basis, a relative basis, and an historical basis.

In the end, this pullback is just par for the course, especially in silver. The way I see it, all it does is give us more time and another opportunity to keep accumulating silver and silver miners at discount prices.

The mania stage still lies ahead. This past week was just a small taste of the opening act.

A graphical representation of what we’ve been repeatedly saying. There is NO WAY that the sham $SLV could add 111,000,000 ounces of silver in three days. It’s simply a logistical impossibility. Watch full video: https://youtu.be/J_Wc_oZpuaA 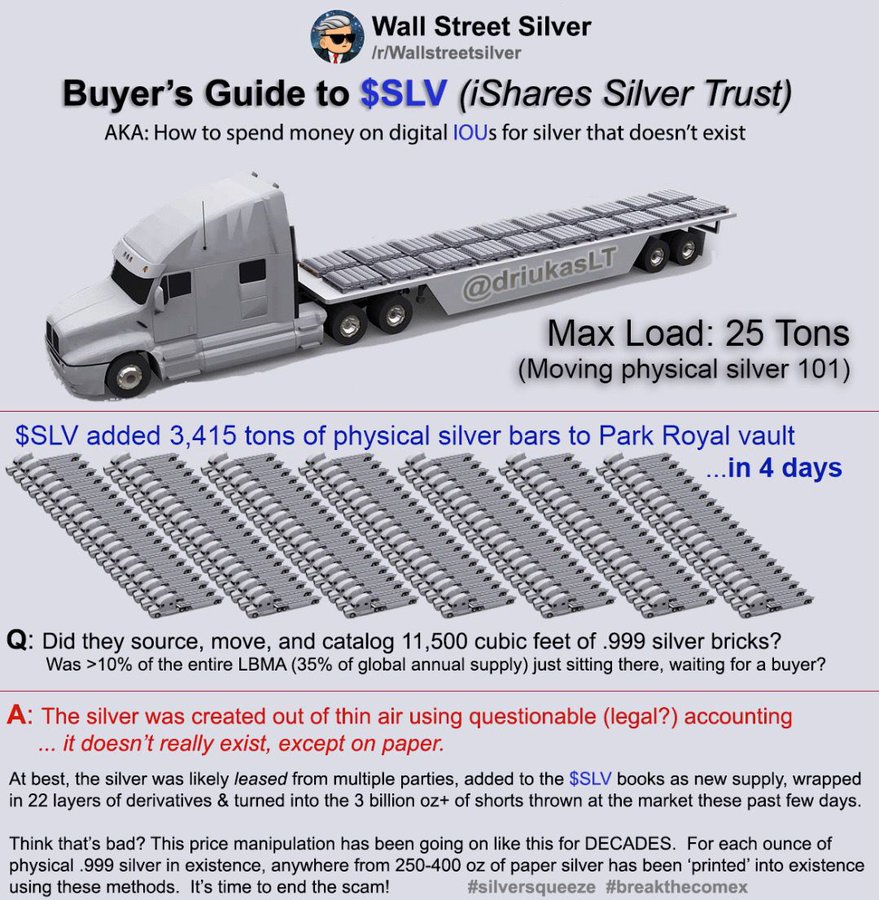