(Tyler Durden) The Fed’s most frequent lament is that no matter how many trillions in bonds (and stocks and ETFs) it buys or how much liquidity it forehoses into the market, it just can’t push inflation higher.

Well, here’s an idea: maybe all the central-planning megabrains at the Marriner Eccles building and 33 Liberty Street can take a break from whatever circle jerk they are engaged in right now, and look at the latest Case Shiller numbers which showed not only that home prices surged at the fastest pace in seven years, rising at a double-digit pace for the first time since 2014… 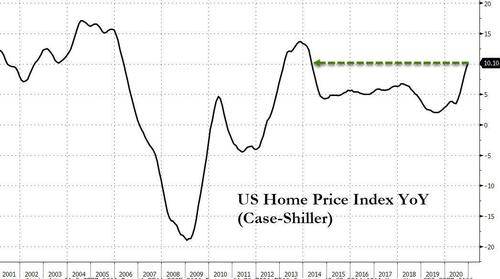 … but that for the first time since the financial crisis, the annual price increase in every major US MSA (according to Case Shiller there are 20 of them) rose by at least 7.7% Y/Y (in the case of Las Vegas) and as much as 14.4% in Phoenix, meaning that the average home prices across all of the US is now rising at over 5 times the Fed’s stated inflation target, and even the cheapest US MSA is rising at nearly 4 times the Fed’s inflation goal. 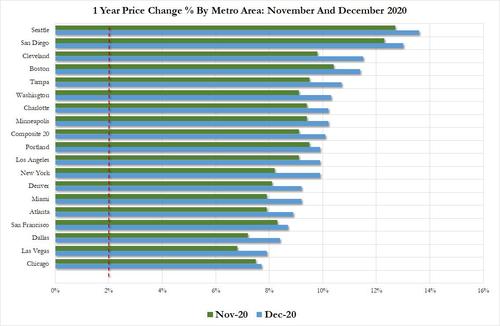 Why does this matter? Simple: Because if – as Joseph Carson mused last month – CPI measured actual house prices, inflation would be above 3% right now.

For those who missed it, here again is the explanation:

“Actual” consumer price inflation is rising during the recession. That runs counter to the normal recessionary pattern when the combination of weak demand and excess capacity works to lessen inflationary pressures.

The main source of faster consumer price inflation is centered in the housing market. The Case-Shiller Home Price Index posted a 7% increase the last year, more than twice the gain of one-year ago.

If actual house prices were used in place of rents core CPI would have registered a 3% gain in the past year, nearly twice the reported gain of 1.6%. 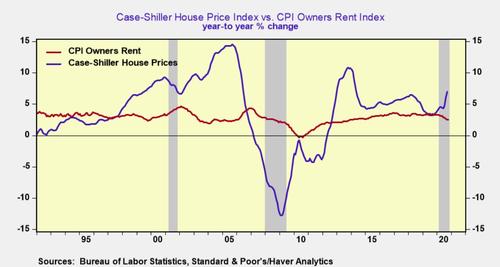 If aggregate price measures did not exist house prices would be one of the most important measures to gauge inflation and the proper setting of official interest rates. That’s because house price cycles include easy credit/financial conditions, excess demand, and inflation expectations, three key ingredients of inflation cycles.

Rising consumer price inflation is added to the list of unique features of the 2020 recession. Others include an increase in corporate debt levels instead of debt-liquidation and rising equity prices instead of share price declines.

If the 2020 recession has economic and financial features that normally appear during economic recovery what does that imply for the next growth cycle? The debt overhang at the corporate and federal debt should impede the next growth cycle. And if the cyclical rise in housing demand is occurring in recession it can’t be repeated during recovery.

The next economic cycle will be filled with unique tipping points, and no one should assume that policymakers can control or offset them.