The rigging of interest rates by hapless central banks continues to do its job in distorting the market. In addition to boosting both bonds and stocks, it also has homeowners drawing on cash out refinancings at the quickest clip since the last global financial crisis. 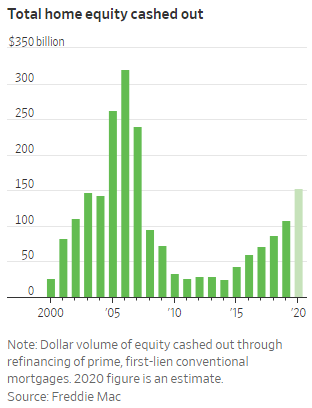 $152.7 billion was cashed out in home equity last year, up 42% from 2019 and the most since 2007, according to the Wall Street Journal. At the same time, lenders originated more mortgages than ever in 2020, helped along by $2.8 trillion in refinancings.

Some home owners chose to use the cash to re-do their homes, since they would be spending more time in them. Others just wanted the cash as a war chest against the uncertainty of Covid.

Susan Wachter, an economist and professor at the University of Pennsylvania, told the Journal: “The support coming from home equity is unparalleled in helping smooth out the degradations from Covid. For those who are in the position to refinance, it’s a major source of support.”

In 2008, cash out refis became the enemy, since they left many people owing more than what their house was ultimately worth. Today, economists believe housing prices will continue to rise and support the idea of cashing out. Low rates also make it an obvious decision; the average rate on a 30 year fixed mortgage fell below 3% for the first time last year.

Daryl Fairweather, chief economist at real-estate brokerage Redfin Corp., said: “There are genuinely a lot of people who want to buy homes to live in. They’re not just buying them to buy them or speculating that home prices will continue to rise. People are buying because they want them and they’re not trying to sell again the next year.”

Median home prices rose to $310,000 in December, up almost 13% from December 2019. The price increases have been felt the most in suburban and rural areas, as an exodus from cities continues. Meanwhile, the median credit score for those who refinanced has approached 800. 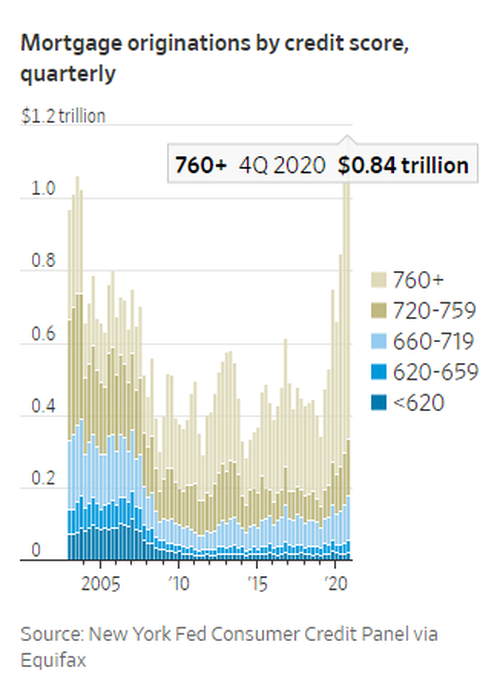 Todd Kennedy of North Texas refinanced and lowered his rate by almost 100 bps. He cashed out $30,000 in the interim to help pay for some home improvements and said he considered a refi when it mortgage company reached out with an offer. His credit score is about 780.

“They said, ‘Hey, you’ve already got equity. We can do a lower rate and get cash back,’” he said.

St. Louis’ Wendi Comello also closed on a cash out refi. Her home, purchased at $95,000 in 2014, appraised for $150,000. She’s going to use the proceeds to pay off credit card debt and renovate her kitchen. Because she had a credit score in the 600s, she wasn’t able to lock in a lower rate.

Mortgage loan officer Eric Henning said many customers have taken out “larger than usual” sums of cash for major renovations or additions: “They can’t find a house to move into, so they’ve basically decided to make their homes work long term.”