(Kevin Means) Interest rates are notoriously difficult to forecast. However, if you believe that rates will continue to rise (as I do), it may be helpful to know which market sectors are likely to be most affected, for good or ill.

At Sapient Investments, we use a proprietary risk model to measure the risks of a stock, bond, fund, or portfolio. It is described more fully in an article on our website entitled “How Much Risk is in My Portfolio?” The four risk factors are:

These four major risk factors are the most important in explaining the behavior of most investments. Although the focus of today’s article is LTB risk, to get an accurate measure, it is important to control for the other risk effects at the same time. That is why our risk model uses multiple regression analysis in which we regress monthly returns against monthly changes in all four risk factors simultaneously. That allows us to disentangle the various risk effects from each other and present a more accurate picture of the true risk factor sensitivities.

Also important is the fact that our risk model uses exponentially-weighted regressions, which weight more recent monthly returns more heavily than those further back in time. Specifically, our regressions use the most recent 36 months, with half of the weight on the most recent 12 months.

In the graph below, we show the LTB betas of the 10 major economic sectors into which U.S. stocks are generally grouped. 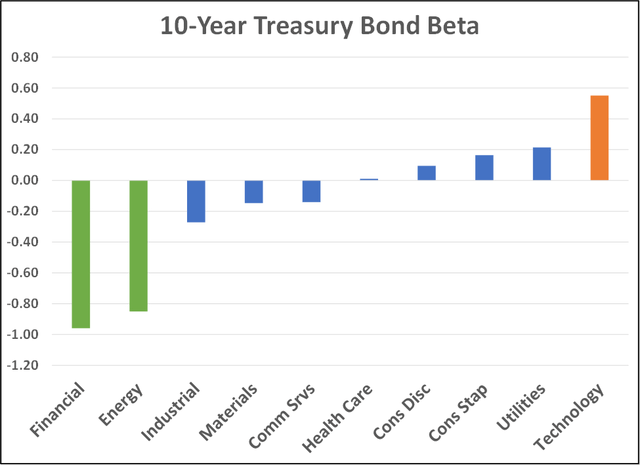 When trying to understand the effects of LTB risk on various sectors, it is helpful to understand why interest rates might be changing. The fact that our risk model emphasizes what has been happening recently is particularly helpful. For example, energy stocks have not historically had a strong relationship with the 10-Year Treasury Bond, either positive or negative. However, recently, energy stocks have been exhibiting a decidedly more negative relationship to bonds than has been typical in the past because of the extremely depressed levels from which energy stocks have been rebounding as hopes for an economic recovery have been emerging. Rising interest rates are often associated with a strengthening economy, which is good for all economically-sensitive stocks. Energy stocks have been behaving with very heightened sensitivity to the outlook for a post-pandemic recovery.

Financial stocks have historically had a slightly negative relationship to the 10-Year Treasury Bond, but they have recently exhibited a much stronger inverse relationship, probably because interest rates have been so low and the yield curve so flat that it has been difficult for financial institutions, particularly banks, to earn normal profits using their traditional model of “borrowing short and lending long.” Rising long-term bond yields help financial stocks to earn a positive spread on their assets.

All financial assets are valued by discounting future cash flows. This relationship is easier to calculate for bonds because all of their cash flows are known in advance—the coupon interest payments and the return of principal are contractual. Bonds with longer maturities have more of their cash flows in the distant future. A bond’s “duration” measures its sensitivity to changes in interest rates, which is exactly what LTB beta measures. The difference is that duration can be calculated exactly ahead of time, but stock LTB beta is estimated using time-series regression analysis. But the underlying rationale is the same. High growth stocks with little or no present earnings are expected to have the bulk of their cash flows occur in the distant future, making their present values much more sensitive to changes in interest rates. They are, in effect, “high duration stocks.”

The graph below shows some of the industries that have unusually extreme LTB betas, either positive or negative. 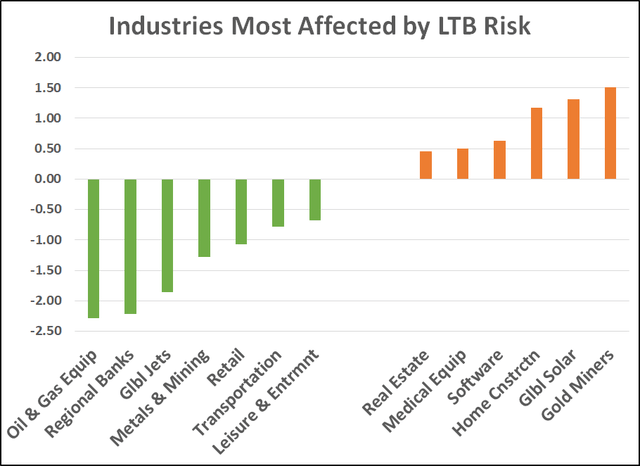 Those on the left side could be described as economic recovery industries. They typically suffered poor returns in 2020 and are only recently seeing their stock prices recover. They are also most often considered value industries as opposed to growth industries.

The industries on the right side are a varied lot. Some are clearly associated with the “winners” in 2020, especially software, medical equipment, and solar. These are all growth industries in which a large portion of the expected cash flows are many years down the road. Consequently, they have been hurt by rising rates through the mechanism of the increased discount rate.

Other industries on the right side are sensitive to changes in interest rates through the economics of how their businesses operate. For example, the demand for real estate and home construction is strongly influenced by mortgage interest rates—when rates move up, demand falls. Similarly, gold miners are affected by the price of gold, which in turn is affected by interest rates because gold does not provide any interest or dividend income, and when interest rates rise, the opportunity cost of owning gold increases, making it a less attractive store of value. 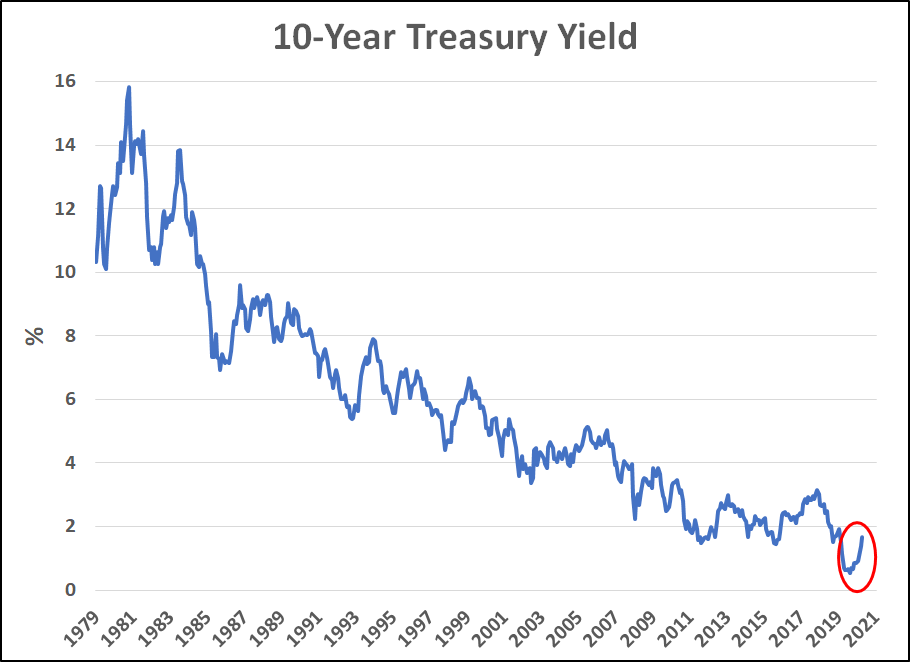 Two observations can be made from this graph. One is that the short-term trend has clearly been up. The other is that if there is a tendency for long-term reversion to the mean, it will be an upward gravitational pull.

What has caused the 10-Year Treasury Yield to move up? Certainly not Fed tightening. The Fed has maintained its unprecedentedly easy money approach, holding short-term rates close to zero and buying huge amounts of longer-term bonds to try to push rates lower all along the yield curve. It appears that the “bond market vigilantes” are back. If bond market participants fear that inflation will devalue their investments, they will naturally sell. They may not wait for the Fed to tighten to stave off inflation or trust that it will, and in fact, given the mindset of the current Fed, the central bank appears much more willing to tolerate much more inflation than would have been the case even a few years ago, in the interest of fostering “full employment.”

With the change in control of both houses of Congress as well as the executive branch, another potentially inflationary element has been added to the policy mix—aggressively expansionary fiscal policy. Blowout deficit spending now looks like it will be the new normal. Historically, when governments have overspent, rather than raise taxes, the easier route has been to weaken the value of the currency through inflation, making repayment of government borrowing easier. Add a propensity towards anti-business, pro-union, and environmental tax and regulatory changes, which are likely to dampen productivity and economic growth, and the mix looks a lot like the policies that led to the “stagflation” conditions of the 1970s.

Inflation has not shown up in the CPI yet, but the bond market is clearly worried about it, and rightly so. The present trends seem unlikely to go away any time soon, and if anything, they seem likely to intensify.

Fed’s “Most Important Rate” Falls For First Time Since February

Hotels: Occupancy Rate Down 17% Compared to Same Week in 2019