Los Angeles County District Attorney George Gascón (D) is planning to “severely downsize or outright dissolve” the office’s Hardcore Gang and Major Narcotics units as early as next month, according to Fox11 LA, citing multiple sources within the DA’s office.

“What we’re hearing is that the Hardcore Gang Unit will be dissolved,” said one of the DA’s prosecutors, who spoke on condition of anonymity.

“My understanding is there’s going to be a dissolution of the unit either April 1 or April 2,” said a second prosecutor, who say they feel they’ve been “hamstrung by Gascón’s decision to ban them from using gang and gun enhancements, and they feel that disbanding the unit will be a disaster waiting to happen, given the violent crime surge across Los Angeles,” according to the report.

“We can already hear in jail calls and interviews with officers on the street telling us that the gang members are laughing at them, I mean it’s undermined the credibility of law enforcement in its entirety,” one of the prosecutors told Fox11.

The Hardcore Gangs unit – responsible for prosecuting the most “heinous and complex gang-related crimes in the county” – is currently juggling 700 active cases, according to FoxLA‘s Bill Melugin. What’s more, “the LA DA Office’s Major Narcotics unit had a meeting with upper management at 3pm and were informed that their unit will be cut by as much as half.”

Sources tell me management is saying Gascon wants to “reimagine” the unit and make it more community based. I’m told management hasn’t answered them on how big the downsizing will be/when it will happen, but the unit will be renamed because administration doesn’t like it. @FOXLA

BREAKING: I’m also told that the LA DA Office’s Major Narcotics unit had a meeting with upper management at 3pm and were informed that their unit will be cut by as much as half. So Major Narco and Hardcore Gangs will both be downsized by order of DA George Gascon. @FOXLA

“He is simply doing what the people have been asking for. That’s why he was elected,” said BLM activist “Akili,” adding “We have called for the disbandment of that unit because we saw how it was abusive, how it was used to criminalize people in neighborhoods, and we saw that it was ineffective. Now he’s simply saying, let’s just swing it back to where it should be.”

The Hardcore Gang unit prosecutors disagree – and say dissolving it will hurt marginalized communities the most.

“The misnomer with my cases, because I do all gang violence cases, gang murder particularly, is that all of my victims are rival gang members, and that’s not true. They miss their targets and they get their enemies wrong fully because of the way they look, whether that’s a Hispanic male with a shaved head or a Black male standing on the corner at the wrong place at the wrong time.”

We think we’ve seen this one before… 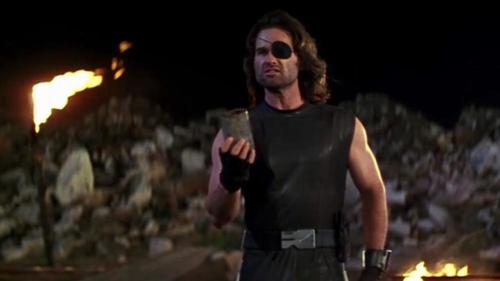 Kurt Russell as Snake Plissken in Escape from New