It is estimated that the average cost of living in America was $53,564 in 2020. The figure fluctuated from $41,600 in Mississippi to $65,740 in California. If one lives in San Francisco, however, no job is needed to provide for one’s needs such as housing, food, hygiene, and security. 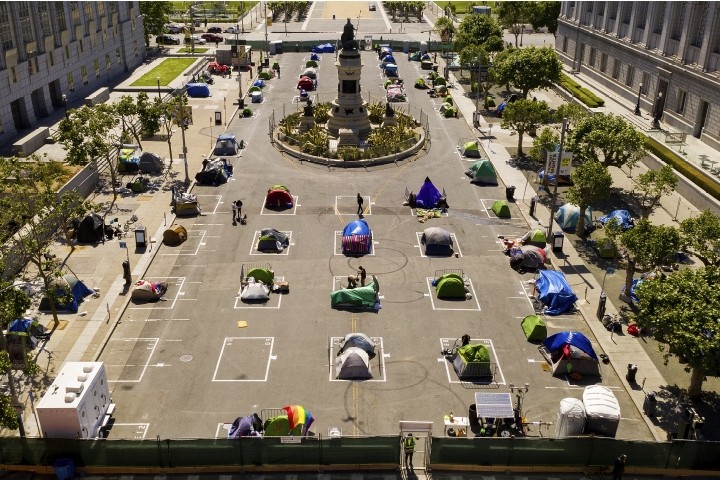 According to the outlet, the city created these sites in May 2020 to protect the homeless population from COVID-19, “quickly” getting them off crowded sidewalks and into an open-air place where people could socially distance and access basic services. The program currently costs $18.2 million for about 260 tents.

The program, apparently, was such a “roaring success,” that officials from the San Francisco Department of Homelessness and Supportive Housing went before the Board of Supervisors’ Budget and Appropriations Committee last week and requested $20 million over the next two years to keep all the tent encampments running. Of the requested funds, $15 million would be spent in the upcoming fiscal year, making the cost per tent $57,000. The additional $5 million would be for the 2022-2023 fiscal year, when officials plan to significantly scale back the program.

The discussion comes as the city prepares to wind down its homeless hotel program, which is currently sheltering about 2,000 people. While the homeless department has promised that every hotel resident will be offered a housing placement, the city is still grappling with a tight housing market and limited shelter options for the thousands on the streets.

Those high costs, and city staff’s proposal to continue funding what was supposed to be a temporary, pandemic-era solution, was met with criticism among supervisors.

The $20 million being requested for the program “seems like an exorbitant amount for something that we’re trying to transition [away from] as quickly as possible,” said Supervisor Ahsha Safaí at the hearing.

Gigi Whitley, a Department of Homelessness and Supportive Housing staffer, tried to justify the costs, saying that of the $18 million the city had spent on safe sleeping sites, about $1.2 million was for the showers, $3 million was for providing meals on-site, and $13 million was going to provide around-the-clock staffing and security. That $13 million was needed for the city to be “good neighbors and good stewards,” said Whitley, explaining that 24-hour staffing was “necessary so that someone doesn’t leave the site and go into the neighborhood and maybe establish their tent there.”

This unseen level of generosity was made possible thanks to the so-called Proposition C, passed in 2018. The legislative initiative hiked San Francisco’s already-high individual and business taxes by 28-33 percent with the goal of raising around $300 million per year to be spent on homelessness, supportive housing, and mental-health services — almost double the $380 million the city was already spending. As expected, a ballot initiative that taxed well-to-do individuals and businesses to pay for homeless services, was overwhelmingly supported in the ultra-liberal San Francisco. Proposition C passed with more than 60 percent of the vote.

According to the Hoover Institution, the city’s 2020-2021 budget for the Department of Homeless and Supportive Housing is about $852 million. To put that in perspective, Sacramento’s city budget is about $650 million, which covers all public services for their population of over 500,000. San Francisco estimates about 8,000 homeless live in the city. The $852 million budget works out to about $106,500 per homeless individual.

Still, that envy-worthy number is proposed to increase. The Department’s website says that San Francisco Mayor London Breed’s proposed FY21-22 and FY22-23 budgets include significant investments to address homelessness. In total, the proposed FY21-23 HSH budget leverages over $1 billion over the next two years in federal, state, and local resources (including Proposition C funds).

Aside from such substantial support of the homeless, there are other factors that contribute to this issue in the Golden State, and in San Francisco in particular.

One is a rent control, which has been shown to cause housing shortages that reduce the number of low-income people who can live in a city while raising the demand for housing. Further, it deters new housing construction, which worsens the homelessness problem by creating more people needing homes than homes available.

Another factor is over regulation of the housing construction, which adds to the price tags for owners and renters.

Then, as many California cities are “sanctuary cities” that welcome illegal immigrants, it comes as no surprise that the homeless population is on the rise.

High taxes make people and businesses leave to lower-tax states. Therefore, there is a smaller tax base and fewer jobs available for those who need work.

Add to all of that San Francisco’s lenient drug policy, which includes failing to prosecute Fentanyl dealers. It was reported in April that twice as many San Franciscans died of drug overdose than from COVID-19. At the same time, San Francisco’s Department of Public Health has distributed methadone, alcohol, tobacco products, and marijuana to homeless people sheltered in the hotels during the pandemic, arguing that this type of “support” is “good for them and our community.”

1 thought on “San Francisco Pays $60,000 Per Tent for the Homeless; Asks for More Funds”