Despite a plunge in home builder sentiment, after June’s unexpected drop “due to an unprecedented price spike”, Pending Home Sales were expected to join both new- and existing-home sales with a modest rebound in July. But that was very wrong as July’s US Pending home sales plunged 1.8% MoM (against +0.3% MoM expected), sending the year-over-year sales comp down 9.5%.

That is a second straight monthly decline in pending home sales… 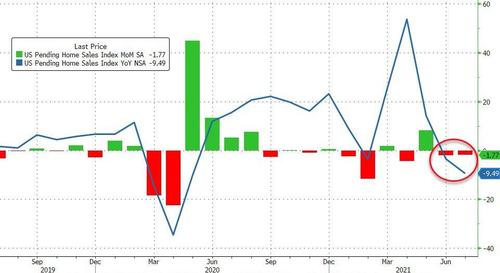 As a reminder, unlike existing-home sales, which are calculated when a contract closes, the index of pending home sales is based on contract signings.

“The market may be starting to cool slightly, but at the moment there is not enough supply to match the demand from would-be buyers,” Lawrence Yun, NAR’s chief economist, said in a statement.

“That said, inventory is slowly increasing and home shoppers should begin to see more options in the coming months.” 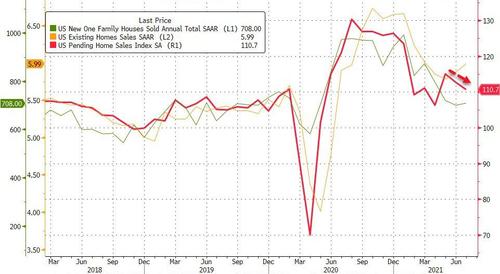 Signings declined in three of four U.S. regions from the prior month, led by a 6.6% drop in the Northeast. Contract signings rose in the West by 1.9%.

“Homes listed for sale are still garnering great interest, but the multiple, frenzied offers – sometimes double-digit bids on one property – have dissipated in most regions,” said Yun.