(Simon Black) 301 AD was a big year for the Roman Empire.

That was the year that, amid spiraling inflation, Emperor Diocletian issued his Edict on Maximum Prices, essentially fixing prices of just about everything across the Roman Empire.

The price of wheat, a day labor’s wages, a quart of olive oil, transportation rates– everything was established by the Emperor’s edict, and enforced under penalty of death.

The other big event of 301 AD was the introduction of the solidus gold coin, roughly 4.5 grams of nearly pure gold.

And while the Romans had a history of debasing their other coins, like the silver denarius and sesterce, the government actually did a pretty good job maintaining the value and purity of the gold solidus.

Even hundreds of years later, after the western empire in Rome had fallen to the barbarians, and imperial power was concentrated in Byzantium, the gold solidus was still approximately as pure as it was in the early 300s.

That’s an extraordinary track record for currency stability. Confidence in the gold solidus was so high, in fact, that various tribes and kingdoms around the world used the coin for trade and savings.

This became a source of pride for the Byzantine Empire; Justinian I, who ruled in the mid 500s, stated that the solidus was “accepted everywhere from end to end of the Earth,” and that it was “admired by all men in all kingdoms, because no kingdom has a currency that can be compared to it.”

It wasn’t until the mid 11th century, more than seven centuries after the introduction of the solidus, that an Emperor began to debase the currency.

Just like Hemingway described going bankrupt, the debasement of the solidus was gradual… then sudden.

The rest of the world took notice. The Byzantine Empire’s political, economic, and military power were waning. And with the rapid debasement of the solidus, international traders looked for other options.

Throughout history, in fact, reserve currencies have routinely changed, just as frequently as power and wealth shift. 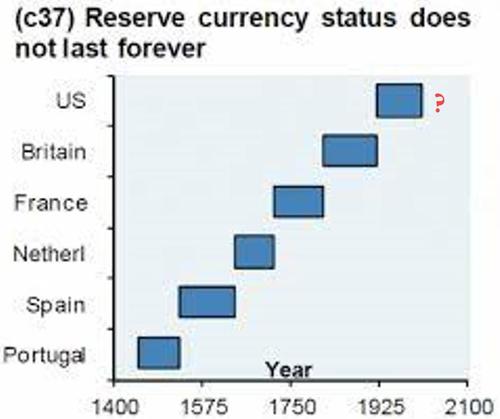 But eventually Spain’s wealth and power waned, and the real de ocho was replaced. The Dutch guilder dominated European trade in the 1600s and 1700s, just as the Netherlands’ wealth and power soared. Yet they were displaced by the British Empire and pound sterling in the 1800s and early 1900s.

Both the United States and the US dollar have held this status for the last 80 years. And at the moment this is still the case.

History, however, is very clear on this point: wealth and power shift. Reserve currencies change. And it would be foolish to assume that this time is different.

But let’s be honest: the rest of the world is probably not brimming with confidence in the United States right now.

They’re looking at this shameful, disgraceful catastrophe in Afghanistan and wondering, “Is this seriously the world’s dominant superpower?”

But it’s more than Afghanistan. It’s endless deficits. It’s ridiculous spending initiatives that pay people to stay home and NOT work. It’s rising inflation thanks to the continued erosion of the US dollar.

None of these inspires confidence.

It was nearly 1,000 years ago when foreign traders began looking for new options after they lost confidence in the solidus, and in the Byzantine government.

Today there are already international banks, multinational businesses, and foreign governments that are starting to diversify out of the US dollar.

This is a major change. It’s not something that will happen overnight; like the solidus debasement, it will happen gradually… then suddenly.

There will be small milestones and minor events that take place over a period of many years. A lot of it has already happened.

But the end result will be a sharp decline in the US dollar’s market share of global reserves. And for bag holders of US dollars, that’s going to mean a LOT more inflation.

1 thought on “How Much Longer Can U.S. Dollar Dominance Survive?”