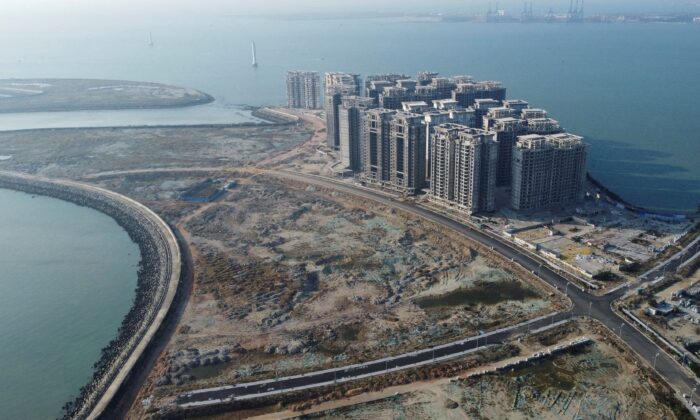 An aerial view shows the 39 buildings developed by China Evergrande Group that authorities have issued a demolition order on in Hainan Province, China, on Jan. 6, 2022. (Aly Song/Reuters)

(Daniel Lacalle) A few months ago, when investors started to discuss the troubles of Evergrande, China’s largest real estate developer, many economists saw the problem as isolated and insignificant. The consensus message was that the real estate crisis was containable and that the Evergrande default would be a single case. However, Chinese defaults on local and overseas bonds rose to a record $43 billion in 2021, according to Bloomberg, led by widespread defaults in the real estate sector.

Up until a week ago, the bonds of Zhenro Properties Group were seen as safe, and the company was widely perceived as a rare case of balance sheet strength in a troubled sector. Unfortunately, reality was significantly different, and the company warned that it may not meet its credit obligations.

The surprise announcement of credit risk from Zhenro Properties highlights the extent of the risks that have accumulated in the Chinese real estate sector, with a bubble of enormous proportions that’s bursting slowly and creating ripple effects on the rest of the economy.

In my article “China’s problems are larger than Evergrande,” I already mentioned that the distressed property giant wasn’t an anecdote, but a symptom of a model based on leveraged growth and seeking to inflate gross domestic product (GDP) at any cost, including ghost cities, unused infrastructure, and wild construction. The indebtedness chain model of Evergrande isn’t uncommon in China, and Zhenro shows that even those developers that were perceived as relatively more prudent are, in fact, in a similar dire situation.

This “surprise” isn’t uncommon. When we look at the burst of the real estate bubbles in Sweden, Spain, Japan, Iceland, and other economies, the process always starts with the message that one default is an anecdote and continues with the realization that the allegedly safest companies suffer from similar problems of excessive leverage and weak cash flow generation.

As I mentioned in September, many Chinese companies follow the “running to stand still” strategy of piling on ever-increasing debt to compensate for poor cash flow generation and weak margins. Many promoters get into massive debt to build a promotion that either isn’t sold or is left with many unsold units, then they finance that debt by adding more credit for new projects using unsaleable or already leveraged assets as collateral.

The real estate sector is enormous in China. Its direct and indirect weight, according to JP Morgan, is 25 percent of GDP, more than double the size of previous real estate bubbles in Japan or Spain. It’s impossible for the Chinese regime to contain the implosion of a sector that has massive ramifications that affect all the services sector and numerous side industries. The Chinese regime tries to disguise the risk by injecting liquidity into Chinese banks and cutting rates but, even if the vast majority of the property developers’ debt is in the hands of domestic savers, the collapse in investor confidence is difficult to contain. At best, the Chinese economy will see an inevitable slowdown. In the worst-case scenario, the implosion of the real estate sector may cause a large hole in the national banks’ assets that may need the largest bailout in modern times. The outcome may lie somewhere in between.

Many sectors in China may continue to thrive regardless of the property slump, but none of them, even all combined, can offset the impact of such a dominant part of the Chinese economy. If other global economies were unable to offset the burst of a property bubble even when the size of their real estate sectors in the total economy was extraordinarily lower than in the case of China, it’s virtually impossible to believe that the Asian giant will be able to achieve its growth target when the property bubble burst coincides with an unprecedented government intervention in other sectors.

Chinese property developers need to repay or refinance up to $100 billion in debt in 2022, according to Bloomberg. It isn’t difficult to predict that at least half will default, surpassing 2021’s record figure. Additionally, global and domestic demand for the largest Chinese sectors is weakening due to expectations of more government crackdowns in 2022.

The combination of increasing government interventionism with the rising concern about the financial situation of debt issuers may be unsurmountable for the Chinese economy. Repeating failed Keynesian demand-side policies is not the answer. China needs to open its economy and abandon a debt-fuelled model.