“Sellers are fueling this turnaround in inventory, with newly listed homes entering the market at a rate not seen since 2019.”

Mortgage costs are the most expensive in years as the Federal Reserve embarks on aggressive quantitative tightening, implying that the souring macroeconomic climate may not support extraordinary home price growth for much longer as the national inventory of homes increases for the first time in years, according to Realtor.com data.

Realtor.com reveals national inventory of active listings increased by 8.0% in May over the same month last year. It explained a “major turning point in inventory” has arrived and said, “sellers are fueling this turnaround in inventory, with newly listed homes entering the market at a rate not seen since 2019.” 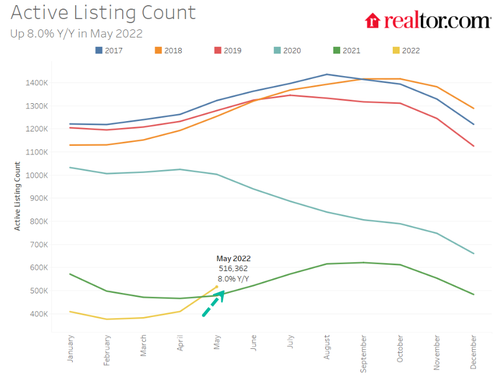 The most significant increases in active listings were mainly in the West and South. The largest metros where supply returned were Austin, Phoenix, and Sacramento.

Even though supply is returning, the number of active listings compared with May 2020 is down 48.5%, or nearly half of the available homes.

“Moderating demand is also playing a role, with pending listings declining compared to last year,” Realtor.com said. Still, homes are spending less time on the market than a year ago, and prices are still rising.

Increasing inventory last month has yet to make an impactful dent in price growth. The Case-Shiller (newly minted S&P Global) home price index data surged to a new record in March and showed the 20-City Composite surging 2.42% MoM (more than the 1.93% expected) and surging by a record 21.17% YoY (more than the +20% expected). 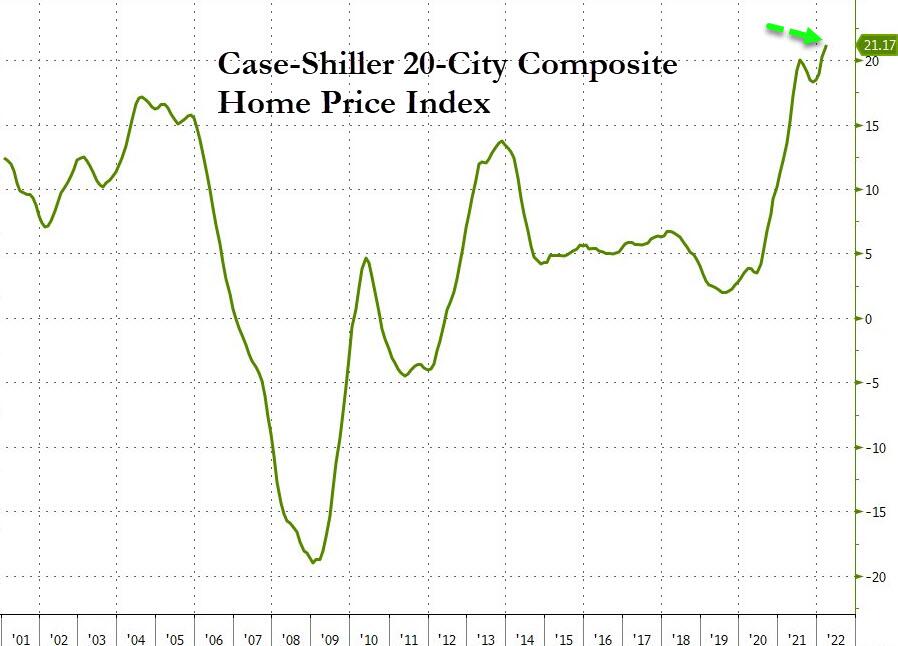 But as a reminder, the Case-Shiller data is lagged and smoothed, and already, mortgage applications have collapsed because of higher rates. Due to continuing low inventory, it will take time for housing prices to reverse. 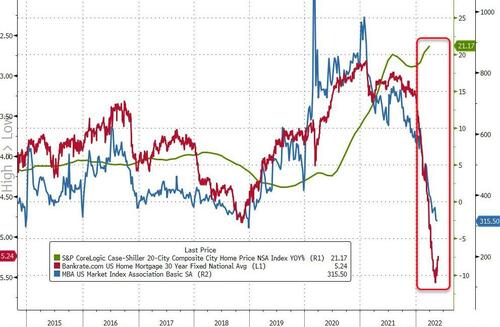 What’s promising for homebuyers who’ve been sidelined over the last year or two because of soaring home prices and rising mortgage costs, triggering an affordability crisis by pricing millions of people out of homebuying, is the return of inventory to the market for the first time since the pandemic began.

Last month, Zillow reported a dismal outlook on fears that rising mortgage rates would result in the next downturn. Then Airbnb co-founder and CEO Brian Chesky warned: “this moment feels similar to late 2008 when we started” the online marketplace for lodging.

This moment feels similar to late 2008 when we started Airbnb

The Fed is sparking a controlled demolition of the red hot housing market by quickly pushing up mortgage rates to curb demand with hopes of flooding the market with inventory to tame the highest inflation in four decades.

Economy
Expect A Deep Recession To Start This Quarter Or Early Third Quarter
Bridgewater: US is on the cusp of stagflation, markets yet to realize