Shortly after 1800ET, just as Californians begin to head home for the day, the California Independent System Operator issued a level-1 energy emergency alert shortly after tapping all its available power supplies. Despite earlier warnings to reduce usage, Californians – in all their self-righteous virtue – decided to charge their EV anyway, pushing demand above capacity. 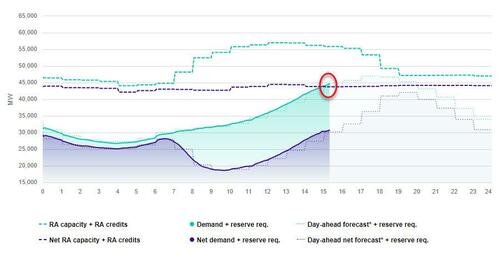 Bear in mind that it is not even in the scheduled Flex Alert period (from 4pm to 9pm PST) yet.

“The reality is we’re living in an age of extremes — extreme heat, extreme drought.”

…and extreme lack of grid preparedness for your state’s virtue-signaling.

Update (1600ET): As the day went on, California warmed up more than expected and that has prompted California’s grid operator to issue a specific warning of the potential for power shortfalls that could lead to blackouts on Wednesday night.

Officials asked residents to cut back on power use Wednesday between 4 and 9 p.m. as temperatures soar above 100 degrees Fahrenheit.

“This is a manifestation of what CAISO warned folks about back in May, that unless they see voluntary curtailments the grid could become unstable during certain periods of high demand,” said Gary Cunningham, director of market research at risk management firm Tradition Energy.

“In this case it is extreme heat that is causing it, but overall weakness in the supply picture are adding to the issue.”

The heat poses the biggest test to the grid since the summer of 2020, when rolling outages engulfed portions of the state.

California power grid officials have a sobering warning this week, telling customers to brace for potential blackouts as the state’s grid faces capacity constraints over the Labor Day weekend.

“The top three conservation actions are to set thermostats to 78 degrees or higher, avoid using large appliances and charging electric vehicles, and turn off unnecessary lights.

California’s grid is projected to exceed 48,000 megawatts next Monday, the highest of the year, as a menacing heatwave will send temperatures across the state 10-20 degrees above normal through next Tuesday. 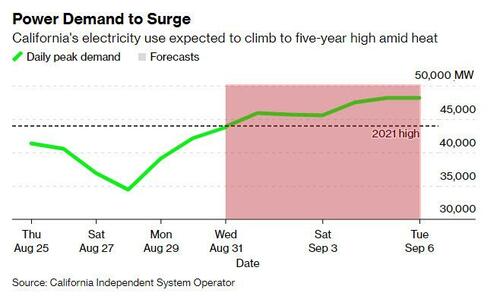 The fact that CAISO has to ask customers not to charge their EVs during the current heatwave implies the grid is fragile.

“If weather or grid conditions worsen, the ISO may issue a series of emergency notifications to access additional resources and prepare market participants and the public for potential energy shortages and the need to conserve,” California’s grid operator warned.

A surge in EV charging at home could bring down parts of the state’s grid. 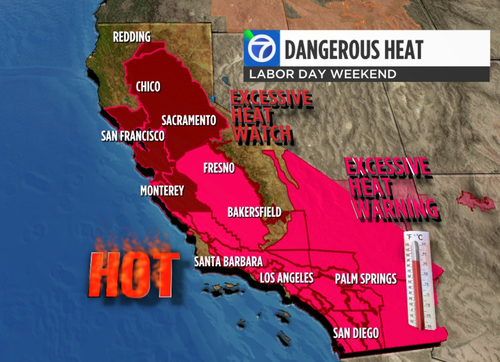 So much for the green energy transition to unreliable renewable solar and wind.

How exactly is the progressive state – which is hellbent on ridding fossil fuel generation from the grid and replacing it with unreliable solar and wind – going to support all the new EVs after lawmakers passed a new measure last week to eliminate all gas-powered vehicles by 2035?

Nuclear is the only answer to decarbonizing a power grid with sustainable power generation. Asia gets it.

Grid operators are concerned by the increasing use of air conditioners, and as the evening rolls around, people plug in their EVs to charge, increasing power demand as supply constraints suggest the state will have years of a chaotic grid, similar to a third world country.