(Brian Shilhavy) November 8, 2022 will obviously be remembered in history as the day of the U.S. mid-term elections, but could another event that happened Tuesday eclipse even the national elections? 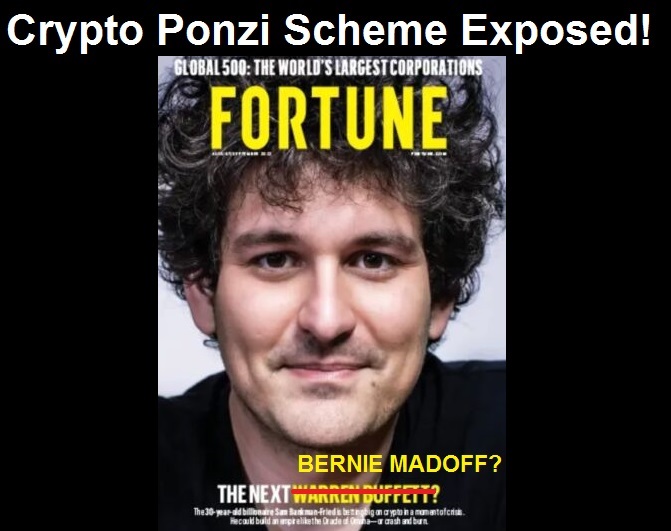 Earlier this year I warned that cryptocurrencies were NOT safe havens to protect financial wealth, when Coinbase, the largest US crypto exchange service, announced that they had cut off 25,000 Russian wallets.

As I noted then, I have never felt comfortable putting major resources into cryptocurrencies for several reasons, the most obvious one being that it is dependent upon “the system,” which requires, among other things, electricity and a working Internet.

New problems with cryptocurrencies were exposed yesterday, when the equivalent of a “bank run” happened when crypto exchange FTX saw $6 billion of withdrawals in a 72-hour span, resulting in them reportedly stopping the process of withdrawals yesterday.

The August/September cover of Fortune Magazine raised the titillating question as to whether crypto billionaire Sam Bankman-Fried might be the next Warren Buffett – a man whose investment acumen has survived more than seven decades. Less than three months later, the public has its answer. Bankman-Fried’s crypto empire has turned to ruins in one week.

As it turns out, folks don’t have a lot of confidence in the crypto exchanges that hold their crypto. The equivalent of bank runs seen in the early 1930s, before federal deposit insurance was enacted by Congress in 1933, can wipe out a crypto exchange in a week’s time.

According to Reuters, Bankman-Fried’s crypto exchange, FTX, saw $6 billion of withdrawals in a 72-hour span through yesterday, leaving the exchange teetering amid questions about its solvency. (Source.)

Binance’s Changpeng Zhao appears to have cast the death blow on competitor FTX and its “billionaire” founder/CEO, Sam Bankman-Fried. Bankman-Fried’s fall from grace has been one of the more stunning losses of net worth in recent history. Despite there likely being issues under the surface prior to Tuesday, a massive $6 billion in withdrawals forced the company into a liquidity crisis. Its FTT token then crashed before SBF reached out to nemisis Zhao at Binance for a bailout.

The situation culminated in all of crypto crashing on Tuesday – including pulling down the entire stock market at points – and Bankman Fried losing a substantial portion of his net worth, according to Bloomberg. In fact, reports say he has lost 94% of his $16 billion fortune. (Source.)

Some big investors, including Blackrock and celebrity athletes including Stephen Curry and Tom Brady, were heavily invested in FTX.

Celebrity investors also made their way to FTX. Basketball star Stephen Curry, for one, signed a partnership with the platform in September 2021. Interestingly, this was his first investment in the crypto industry while his – Eat.Learn.Play. – foundation joined hands with FTX on several charitable initiatives.

Another high-profile individual caught in the drama is National Football League (NFL) star quarterback Tom Brady. After many personal and professional setbacks, Brady’s net worth is now at a big-time risk.

The Football superstar and his wife, model Gisele Bündchen entered into a long-term relationship with FTX in 2020. It signaled his intention to enter the crypto industry. As part of the deal, both received Bitcoin in addition to an equity ownership stake in the company.

The former couple put their combined net worth of $650 million. While Brady was said to have taken up the role of FTX’s brand ambassador, the former Victoria’s Secret cover girl served as the environmental and social initiatives advisor. (Full article.)

Sam Bankman-Fried, once featured on the cover of Fortune Magazine as potentially the next “Warren Buffet,” and has now reportedly lost 94% of his $16 billion fortune, may be better compared to Bernie Madoff, as ZeroHedge News found an interview he did a few months ago where he admitted that crypto yield farming is basically a Ponzi business.

Over the summer, I was stunned when a friend of mine sent me an interview with FTX CEO and crypto billionaire Sam Bankman-Fried that I had never seen before. In the interview, Sam, who I recently noted knows more about the inner bowels of the defi/crypto space than anybody, basically came out and admitted that crypto lending was one giant Ponzi scheme.

Of course, many of us knew that the space was a ponzi scheme already – as I have been adamantly outspoken about – but it was the sheer, unadulterated, matter-of-fact-style, bald-faced admissions by Bankman-Fried that caused my jaw to drop when I read it and listened to it this week.

Now, looking back on it after FTX’s collapse this week, it’s even more stunning that nobody saw it coming. (Full article.)

The big question now is when will the other big Ponzi scheme rupture, the New York Stock Exchange, sending the U.S. and probably the rest of the world into financial ruins and usher in the Great Reset?

Gonzalo Lira On The Midterms…
’They Stole It, Again’…They Did It Again!’

Net Zero Is A Low-Key Way Of Killing Us Off

11 Signs That Economic Activity Is
Plunging Off A Cliff (Snyder)

Kirsch – Data Shows COVID-19 Vaccine Is The
MOST DANGEROUS Vaccine Ever Made –
NO, It’s NOT A ‘Vaccine’…It’s A DOD BioWeapon
To Do Only One Thing…To Kill People, Lots Of Them

The Spike Protein Is Probably One Of The Most
Toxic Proteins The Human Body Has Ever Seen’
…Dr. Paul Marik – Video

Global Weekly CV-19 Incidence Down By 15%

Global COVID-Related Mortality Down Almost
By 90% Since February – WHO

Pfizer Appears To Have Corrupted The
Entire Western World