No country has better exemplified the global automobile recession than China. Sales for the world’s largest auto market continue to deteriorate, with the latest report confirming that passenger vehicle sales in China tanked yet again – this time dropping 16.6% year-over-year to 1.54 million units, following a 12% decline in March and an 18.5% slide in February. In addition, April SUV sales fell 14.7% to 642,220 units.

END_OF_DOCUMENT_TOKEN_TO_BE_REPLACED

It was yet another dismal month for US auto sales in April, continuing a recessionary trend that has been in place not only in the US, but globally, for the better part of the last 12 months and certainly since the beginning of 2019. The nonsense-excuse-du jour for this month’s disappointing numbers is being placed on the weather on seasonality on rising car prices, which easily pushed away an overextended, broke and debt-laden U.S. consumer.

In a nutshell, US auto sales in April tumbled by 6.1% – the biggest monthly drop since May 2011 – to just 16.4 million units, the lowest since October 2014. Aside for an incentive-boost driven rebound in March, every month of 2019 has seen a decline in the number of annualized auto sales. Furthermore, as David Rosenberg notes, the -4.3% Y/Y trend is the weakest it has been for the past 8 years.

Adding “fuel to the fire”, the average price of a new car in April came in at $36,720, the highest ASP so far this year, according to The Detroit News. It comes at a time where interest rates remain above 6% on average, further pressuring sales.

Edmunds analyst Jessica Caldwell said: “April sales were a bit dampened by the harsh financing conditions we’ve been seeing in the new-car market. Shoppers are really starting to feel the pinch as prices continue to creep up and interest rates loom at post-recession highs.”

Brian Irwin, Accenture Plc’s managing director for North American automotive, said simply: “We are disappointed with how sales turned out.”

Across the board, almost all major names missed estimates, especially as passenger vehicle sales continued to collapse. Nissan was the one manufacturer that was able to buck the trend for the month. Some additional details, according to Bloomberg:

Nissan’s success came from offering a better rate, proving that much of what is keeping the consumer away has been a financial burden. Billy Hayes, a division vice president for Nissan North America, said: “Offering a special rate has done well for us.”

On top those poor results, another one of Detroit’s “Big Three” has said that it will no longer be reporting sales on a monthly basis. FCA said Wednesday it will switch to quarterly sales reports, following the lead of both Ford and General Motors. It said it would begin quarterly reports on October 1 and will provide monthly reports up until that time.

FCA’s Chief Communications Officer Niel Golightly said: “A quarterly sales reporting cadence will continue to provide transparency of our sales results while at the same time aligning with where industry practice is heading.”

More transparency from less reporting – got it. We’re sure it has nothing to do with the fact that FCA’s year-to-date sales are down 4%.

FCA’s U.S Head of Sales Reid Bigland, who has been making excuses for the automaker’s sluggish sales all year, said: “April marks the start of the spring selling season and we anticipate strong consumer spending as we move through May. The industry may be shaking off the first-quarter sluggishness, but shoppers are coming into showrooms and buying.”

FCA’s Ram truck brand was one of the only six brands to post an increase in sales last month, up 25%. The Ram pickup posted a 25% gain with 49,106 units sold and is up 22% for the year. Jeep sales were lower by 8% in April, catalyzed by a 25% drop in Wrangler sales and a 13% drop in Cherokee sales. Ram had also bucked the trend last month: 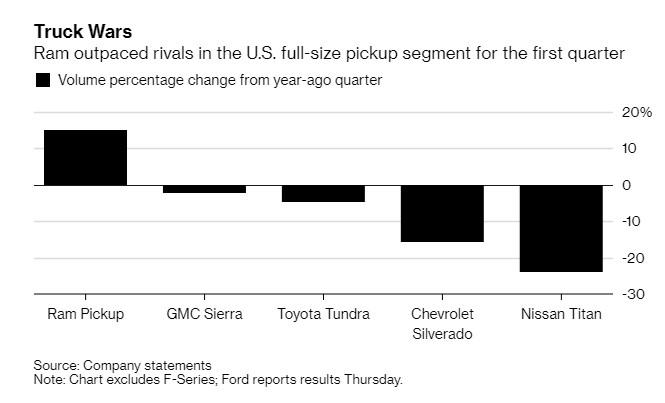 And it’s no coincidence that the biggest failsafe for auto sellers – fleet sales – which can sometimes allow sellers to stuff the channel to meet numbers, have finally cooled.

Zo Rahim, an analyst for Cox Automotive said: “Fleet sales in April appear to have cooled from their impressive run in the first quarter. With overall sales down and fleet moderating, softness in vehicle sales still stems from weakness in the retail market. Affordability concerns coupled with attractive supply in the used-vehicle market might suggest retail sales might not bottom out for the foreseeable future.”

In February, auto sales plunged to 18 month lows as SUV demand hit a brick wall. SUVs were, until this February, one of the sole remaining bright spots in the rapidly slowing U.S. auto market. Despite the fact that they were crippling traditional sedan sales, Americans’ transition to SUVs was seen as a silver lining, prompting many automakers to make infrastructure changes to account for the change in demand. That silver lining looks to have all but completely disappeared at this point. 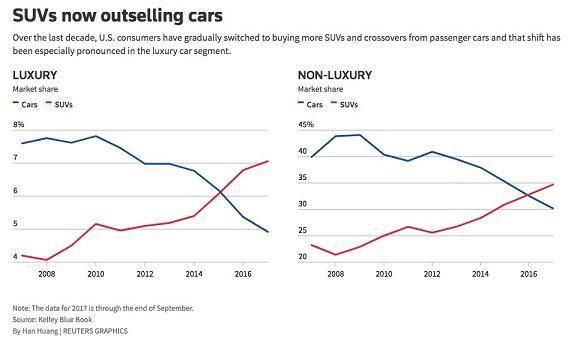 In January, auto companies set the tone for the year, starting 2019 just as miserably as 2018 ended, with major double digit plunges in sales from manufacturers like Nissan and Daimler.

(Blinders Off Research) We have been testing the upper limits of used vehicle pricing (and new) all year. I think we have finally reached a point where the consumer has started rejecting higher prices (used vehicles for now). There were a couple of events last month that raised concern ahead of the most recent used car and truck CPI report:

2. There was a significant drop in used vehicle values during the last week of September.

The sudden increase in used vehicle inventory is a strong signal that the rate of sale has slowed due to price increases that consumers are not willing to absorb. Most retail dealers have a rigid 60-day cut off for used vehicle inventory. As a vehicle nears the 60-day mark, the dealer is forced to heavily discount that vehicle or face an even greater loss by disposing of it through wholesale auction (60 days of depreciation, reconditioning expense, transportation and auction fees). This is also likely related to the sharp drop in used vehicle values during week 4 of September as retail dealers returned to auction and adjusted their bids after realizing the vehicles they previously purchased did not sell at the prices they anticipated.

New and used inventory levels are still showing a draw YTD, but the rate of change is concerning. I am completely convinced that the strength we’ve seen in both new vehicle volume and pricing this year is due in large part to the incredibly strong performance in used vehicle values. If the recent trend in used vehicle values changes, things could get ugly and FAST!

I would take the drop in used car and truck CPI as a serious warning with larger implications to come. I am still confident in Q3 earnings for manufacturers, retail dealers and rental car companies but would proceed with caution going forward.